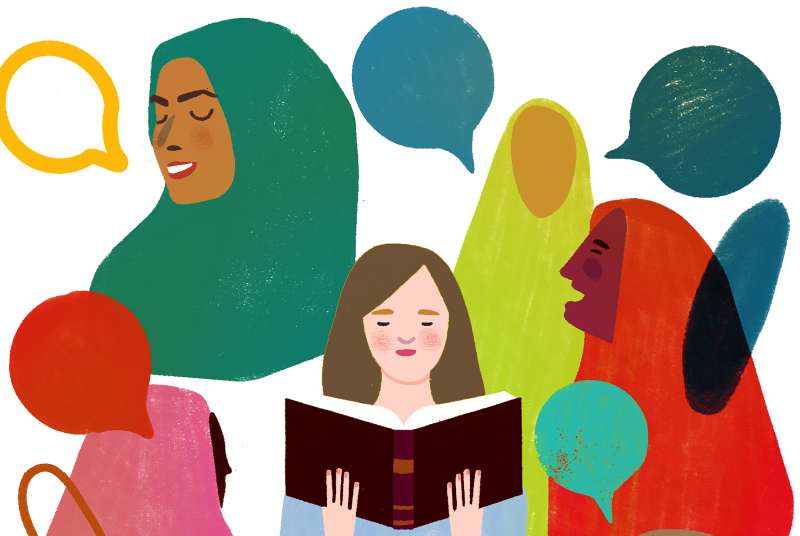 In a fragmented world where refugees abound, language serves as more than a bridge.
ROSALIE LIPFERT ’13 | Jul - Aug 2017

For three weeks during the holidays last December and January, I volunteered at a Syrian and Afghan refugee camp in rural Filippiada, Greece, with the organization Lighthouse Relief. My day-to-day tasks included teaching German, English and math classes to teenage girls in some combination of English and Arabic. I also facilitated a female-friendly space for women and children, where I guided them through cooking, yoga, art and fitness classes and aided with language interpretation whenever needed. (Two Lighthouse trailers and a fenced-in yard constituted the designated female area at the camp.)

At the time I was too caught up in the daily stresses—both the unpredictable chaos of camp life and the political developments taking place back home—to reflect upon two questions that had been brewing in my mind. First, what is the value of a liberal arts education in our tech-based world with its intense competition for jobs and a pedagogical climate that has already begun to head in a skills-to-workplace direction? And second, in our greatly divided nation, what can we be doing to bridge the current political gap and find common ground with one another when our day-to-day lives often keep us in touch only with those with whom we agree?

My work in the refugee camp helped me arrive at some answers once I got home.

I have my liberal arts education to thank for delivering me to Filippiada. As a child I had tagged along with my French professor mother on three Dartmouth language study abroad programs to France, so when I matriculated as a student at the College a decade later, I wished to take up a language that would afford me a foreign study program in uncharted territory. With this logic and with some degree of randomness, Arabic it was, and in the fall of 2011 I arrived in Tangier, Morocco, with seven fellow students. As tends to be my inclination with memorization-heavy study material, I yearned to place some names and faces to my stack of vocabulary flashcards, and after learning of Morocco’s female illiteracy rate—greater than 50 percent—I decided to volunteer as a French and Arabic literacy teacher to 30 women ages 15 to 85 with the little bit of Moroccan Arabic, or Darija, I knew.

My more recent role in Greece paralleled my teaching duties in Morocco. In both cases, Arabic bridged cultural gaps and brought together seemingly disparate worlds of East and West. The language allowed me to connect with women and gain a glimpse of their daily routines. Standing in front of the colorful kaleidoscope of hijabs while I let my hair fall uncovered behind my shoulders, I also had to acknowledge what a gift it was to be so seamlessly welcomed into the space we shared, space I invited myself into with each verbal exchange.

At the Filippiada camp, speaking Arabic allowed me to begin to understand the nuances of refugee life. Subtle messages of racial tensions and unmet needs would have otherwise slipped by unnoticed—the very same intricacies that, when misinterpreted, lead to stereotypes, marginalization and then to increased polarization, not at all different from the dynamic that brought our country to its current state.

Now, back in the United States, I am among the millions of Americans trying to make sense of our fragmented country, searching for ways to relate to the “other” side. If nothing else, my time in Greece has taught me that the language I spoke to reach Syrians and Afghans has an analogous version back home, a language whose power does not rest so much on the words as on the empathy, openness and cultural awareness that seeps through it. These tenets are at the very core of a liberal arts education, which perhaps has more tangible outlets than immediately meets the eye.

Rosalie Lipfert is pursuing a master’s in social work at Smith College. She lives in Northampton, Massachusetts.