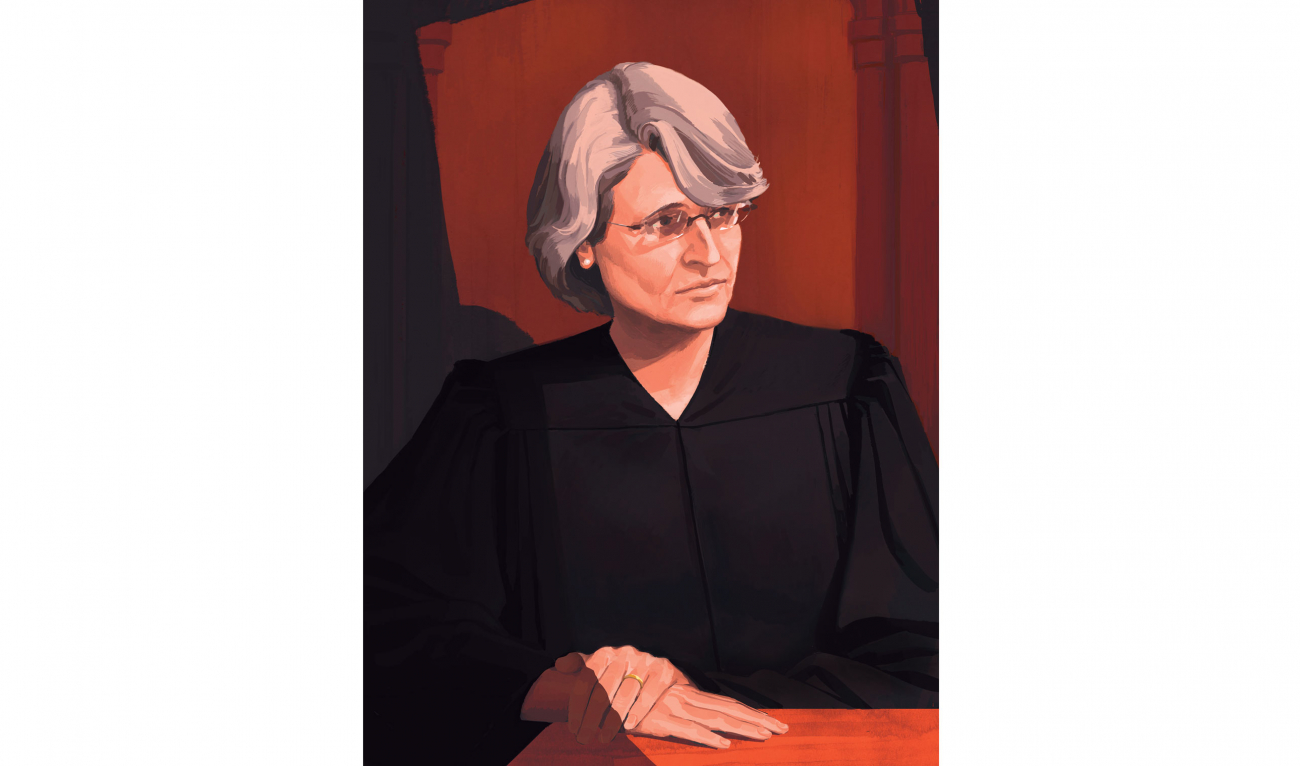 Those who know Justice Beth Robinson best like telling stories about the hip hop-inspired limericks she wrote for her high school basketball team and the page-long Christmas poem she pens every December that summarizes her year in rhyme. They know her as a photographer and an athlete, as someone who insists on pointy hats at birthday parties, gives tins of homemade holiday cookies to colleagues, and relishes hosting vegan dinner parties with her wife, physician Kym Boyman, at their home outside Burlington, Vermont.

“She’s a whirling dervish,” says attorney Susan Murray, who’s known Robinson for more than 30 years. “She doesn’t walk around like she’s the smartest person in the room. In fact, she would never do that. Her humility is, if not unique, unusual for a person with her number of talents.”

Last year, President Joe Biden nominated Robinson to the U.S. Court of Appeals for the Second Circuit, one of the most powerful appellate courts in the country that hears federal appeals from New York, Connecticut, and Vermont, many involving corporations and Wall Street. “The minute I heard there would be a vacancy, I immediately thought she’d be perfect,” says Associate Justice Harold Eaton Jr. of the Vermont Supreme Court. Murray agrees. “If you ask any lawyer or judge in the state of Vermont, Beth Robinson is the name everybody came back to,” she says. “She is the best qualified person for the job. She brings all of the qualities, from brains to humility to hard work.”

At Robinson’s confirmation hearing, she fielded questions about how her years as a gay rights litigator and advocate informed her decisions on the Vermont Supreme Court and how she separates her advocacy from her judicial work. Texas Sen. Ted Cruz used a 30-year-old case from Robinson’s first year practicing law to question what he called her “marked hostility toward religious liberty.” Robinson calmly and politely pushed back.

On November 1, 2021, the U.S. Senate voted 51-45 to confirm Robinson, flipping the composition of the court to a majority of Democratic appointees—and making her the first openly gay judge on a federal appellate court. “I don’t want to see the label define her,” Eaton says. “Whether she had [advocated for same-sex marriage] or not, she would still be the ideal candidate for the job.”

During the past 25 years, Robinson has affected more change in the lives of Americans than most of us do in a lifetime. Her legacy as a gay rights litigator began when she served as co-counsel with Murray in the landmark legal battle that led to the first civil union law in the United States. Through her work in private practice, Robinson spent 18 years representing Vermonters in personal injury, family law, and workers’ compensation cases. For the past decade, she served as an associate justice on Vermont’s high court, the first openly gay justice on that court. When the U.S. Senate confirmed Robinson last November, Vermont Sen. Bernie Sanders called it “momentous” and Vermont Sen. Patrick Leahy tweeted, “An historic nomination—1st openly gay woman to rise to our fed. circ. cts.—of a brilliant, fair, & impartial jurist.”

Yet Robinson never set out to make history.

Bench Warmer | Growing up in Indiana, where basketball reigned and her family bled Dartmouth green, Robinson dreamed of being a high school physics teacher. “Lawyer was never on my radar screen,” she says. The youngest of five, she played on the girls varsity basketball and tennis teams at Brebeuf Jesuit Preparatory School in Indianapolis. During Robinson’s senior year, her team made it to the Final Four, competing on statewide TV in Market Square Arena. Robinson wasn’t a star player—she began most games on the bench but was a shoo-in for the spirit award. “Beth’s leadership on that team was incredible,” says Judy Phillips, a friend and former teammate. “There’s a picture of Beth in the gym, pumping her fist in the air, leading a late-night pep rally in cheers because we were going to the Final Four. And she didn’t even start on that team.”

“My high school basketball career was probably more pivotal to me than anything,” Robinson says. “It gave me a sense that anything is possible. I didn’t ever have doubts as a young person that whatever I set my mind to, I could do.”

Robinson wound up at Dartmouth on a coin toss—literally. When it came down to Dartmouth vs. Princeton, Robinson wasn’t sure she wanted to follow the gravitational pull of her family—father Robert Robinson Jr. ’53, oldest brother Robert III ’75, and sister Barbara ’76—to Hanover. So she left it to chance. “If the coin had come up the other way,” she wonders, “would I have said, ‘Okay, two out of three?’ Dartmouth certainly proved to be the right decision.”

After graduating with a degree in philosophy and government, Robinson attended the University of Chicago Law School with no expectation of becoming a lawyer. She still wanted to be a teacher. But the summer after her first year, as peers flocked to big-city law firms, Robinson interned at a small Vermont shop, Langrock Sperry & Wool. That’s where she met Murray, then an associate, now a partner. “I wanted to get back to New England, and I think it’s that Atticus Finch thing—I wanted to be in more of a small town with real-life people as clients,” she says, referring to the fictional lawyer in Harper Lee’s To Kill A Mockingbird. “At law school, I fell in love with the law. And then that summer I fell in love with the practice of law. There was no turning back.”

“Conscience of the Firm” | Robinson came out to friends and family when she was in law school, and by the time she’d graduated and moved to Washington, D.C., she was completely open about her orientation. “I didn’t identify as gay when I went to Dartmouth,” she says. Coming out “was daunting,” but “it wasn’t an impediment to my professional growth or advancements.” She clerked for a federal judge, then spent a year at a large international firm. She met Boyman, and in 1993, they moved to Vermont. Robinson returned to Langrock and during the next two decades built a practice and eventually became a partner.

While juggling full-time legal practices, Robinson and Murray cofounded the Vermont Freedom to Marry Task Force in 1995 to build an educational and political infrastructure around the movement to legalize same-sex marriage. (By that point, Murray had become a gay rights attorney.) For two years, they spent their nights and weekends driving across Vermont, discussing the issue with church congregations, gay and lesbian groups, and other organizations. “The idea of allowing gay people to get married was totally foreign in the early 1990s,” says Murray, who is gay. “We talked about children’s issues, getting-old-together issues, and financial issues—to humanize it and very patiently answer a lot of questions.”

In 1997, they teamed up with Boston attorney Mary Bonauto of the Gay & Lesbian Advocates & Defenders to file a lawsuit, Baker v. Vermont, on behalf of three same-sex couples who had been denied marriage licenses in Vermont. A trial judge rejected the original case, ruling that the definition of marriage did not include same-sex unions, but the lawyers appealed to the state supreme court.

Home Run | In the early hours of November 18, 1998, a line formed outside the Vermont Supreme Court in Montpelier. It was cold—“sub-freezing,” Robinson recalls—but no matter, people were there to secure tickets to the oral arguments for Baker v. Vermont. The typically sleepy, austere courthouse was jam-packed, and the hallway was so chaotic that the trailblazing lawyers and their clients had to be escorted into the courtroom through the justices’ chambers. Robinson, however, ended up walking straight into the horde to reach the courtroom door. “All of a sudden people realized [who I was]. It’s like the crowd parts and people start doing the thing when you’re running out for a game, doing high-fives on both sides,” she says. “It tapped into something very primal for me because of my background in sports. By the time I got to the table, I was ready to go.”

What happened next has been hailed as one of the finest oral arguments ever made before the Vermont Supreme Court.

Robinson, then 35, stepped up to the podium (literally up—at 5-foot-2 she needed a riser to be seen above the microphones) and harkened back to 1948, when a case in California ended that state’s ban on interracial marriage. “The notion of a Black person and a white person marrying was as antithetical to many people’s conceptions of what a marriage was as the notion of a man marrying a man or a woman marrying a woman appears to be to the state of Vermont today,” she said. The California decision, she argued, “was controversial, it was courageous, and it was correct.”

In December 1999, the Vermont Supreme Court ruled that the state must provide same-sex couples with the same benefits and protections as heterosexual couples. But the legislature would have to act. In April 2000 it did, and Vermont became the first state to recognize civil unions, granting the legal benefits of marriage to same-sex couples without actually using the pièce de résistance: the word “marriage.”

“I emailed Beth and said, ‘Congratulations,’ ” says Heather Quinn, a high school friend. “She said, ‘No, it’s not congratulations. We still have a fight ahead.’ This was early, and she could see that they were fighting for total equality.”

During the next decade, Robinson advocated for the marriage equality movement, especially in Vermont. In April 2009, as the Vermont legislature approved same-sex marriage without a court order—overriding then-Gov. Jim Douglas’s veto with a vote of 100 to 49, just one more vote than required—video footage shows Robinson seated in the room on a plush red chair, chest heaving, tears in her eyes.

She and Boyman married the next year.

When the appellate court seat opened up, Robinson was eager to pursue the opportunity—to “throw myself to the bottom of the learning curve one more time in my career,” she says. Since November, Robinson has worked remotely and heard appeals cases involving federal RICO conspiracy, securities fraud, insurance coverage, and more. She expects to begin traveling to the court in lower Manhattan soon.

Robinson’s confirmation means 14 out of 870 federal judgeships are now held by openly gay or lesbian federal judges, according to civil rights organization Lambda Legal. Meanwhile, five of the 13 federal circuit courts do not have an openly LGBTQ judge. “In 2021 seeing our first openly gay woman elevated to the court of appeals? That is great but long overdue,” says Sharon McGowan, legal director of Lambda Legal. “We still don’t have an openly trans, bi, or nonbinary judge. The fact that we’re still celebrating firsts and seconds—and still looking for first and seconds—is a sign there is still work to be done.”

ABIGAIL JONES ’03 is an award-winning journalist in New York City.