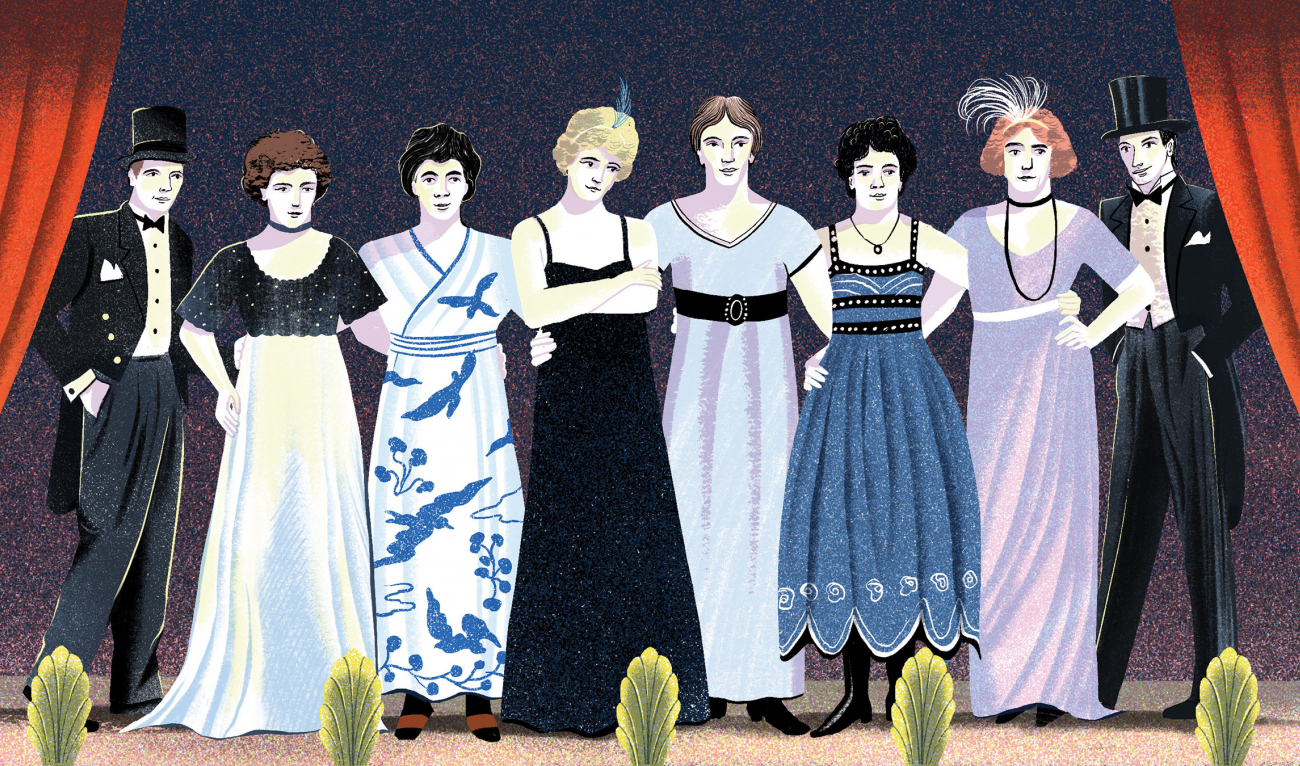 Male students portraying women onstage was nothing unusual. But some brothers of Epsilon Kappa Phi who did so were deemed “dirty linen.” (Illustration by Eleanor Taylor)
Features

In the fall of 1977, Dartmouth undergraduates joined together to establish the Gay Student Support Group to put “an end to the many misunderstandings and fears that surround the issues of homosexuality and bisexuality at Dartmouth,” as they wrote in their statement of purpose. Little did they know that almost exactly a half century earlier, a group of Dartmouth students had struggled to forge queer ties with one another at a time when homosexuality had just begun to be understood as anything other than pathological.

In the mid-1920s, some members of Epsilon Kappa Phi (EKP) frequented a farmhouse across the Connecticut River in a hamlet called Beaver Meadow, about six miles northwest of the College. Rumor had it that, despite Prohibition laws, alcohol flowed freely at the farmhouse apparently leased by Joseph Goodwin, class of 1927, and that the fraternity brothers hosted parties where students were invited to have sex—with each other.

When President Ernest Martin Hopkins, class of 1901, was alerted to these activities in the autumn of 1925, the brothers already had something of a reputation. Many of them were involved in the College theater program and were known for their skill at playing women onstage. There was nothing strange about men playing women at an all-male college. But when certain men took such roles exclusively, and when they had the reputation for effeminacy offstage as well, their fellow students began to talk. Word was that some members of EKP, and especially those who visited the house at Beaver Meadow, were particularly “aesthetic” and “artistic,” thinly veiled code words for queerness at the time.

Homosexual identity was still inchoate across the United States in the 1920s. People who lived in major cities were likely familiar with so-called “fairies” who performed in drag at nightclubs. Although people had engaged in gay sex for centuries, the meanings attached to it had been evolving since the late 19th century. By the 1920s, doctors, psychiatrists, and those in the emerging field of sexology debated the relationship between sexual role, object choice, and gender presentation. Some experts believed that same-sex desire was the result of full gender inversion, a woman’s brain in a man’s body or vice versa. In this context, the Beaver Meadow boys’ predilection for effeminacy and dressing as women made sense. Expert opinion at the time coalesced around the idea that “inverts” constituted a distinct subset of humans, though most could not agree whether homosexuality was innate or learned behavior. That it might be learned behavior is partially what caused some handwringing by Dartmouth administrators.

By late September 1925, other students, fearing for the reputation of their college, had threatened to burn down the farmhouse, horn EKP (that is, harass the frat with the noise of brass instruments), and run Goodwin out of town. Hopkins was particularly worried that some of the older members of the group—including William McCay Patterson and Ralph Jones, both class of 1924 who had already graduated—were exerting an undue influence on younger students, luring them, he believed, across the river to Beaver Meadow. “There was a smell of something decayed and unpleasant about certain individuals of the group,” Hopkins wrote in a letter to the fraternity’s three faculty advisors. “Naturally I prefer that the fraternity should wash its own dirty linen rather than to have the College become the laundry, but it has got to be washed.”

When Hopkins met with students, one told him that Goodwin invited him to the farmhouse. “I have had few limits,” the unnamed student reportedly said, “but I went last night beyond those even which I have had.” Hopkins decided something had to be done.

Hopkins issued a warning to the fraternity that “going to or visiting in the house at Beaver Meadow…was prima facie evidence of undesirability,” and that he expected the group to sort itself out “or else the College will make an investigation sufficiently drastic and thorough to weed out the influences which are so detrimental, even though these center in a comparatively few men.”

Members of the fraternity asked Goodwin, Patterson, and Jones to resign their memberships, which they did. In a letter to Hopkins dated October 1, 1925, the EKP brothers further vowed to “refrain from any activity which may be misrepresented as effeminacy.” The fraternity also passed a resolution “requiring every member to sign a pledge to refrain from drinking under penalty of suspension.”

Hopkins was puzzling through the connections between the boys’ artistic predilections and their effeminacy.

While Hopkins acknowledged that Goodwin had “been led into his present situation by weakness rather than by bad intent,” he expelled him, citing violations of the College alcohol policy. “It is a liquor proposition, pure and simple, as far as any action which we shall take.”

Goodwin went on to graduate from M.I.T., serve as a naval commander in World War II, and work as an architect. Patterson moved home to Rochester, New York, where he married and had a child. He ran an interior design firm and was renowned for exhibiting show horses. Jones also married and became an antiques dealer of American ceramics and pottery.

Sarah Hartwell, a former reading room supervisor at Rauner Special Collections Library who helped research this story, was stunned to discover Hopkins’ correspondence about the Beaver Meadow farmhouse and his efforts to suppress the homosexual clique on campus. “It was a complete surprise, an unexpected discovery, to find this dirt in the presidential papers,” she says. “As I read through the correspondence about this fraternity, I was amazed. His zealousness was highly disturbing.”

Although the word “homosexual” does not appear in any of his correspondence, it is clear that Hopkins was puzzling through the connections between the boys’ artistic predilections and their effeminacy. He wondered in a letter if “there is something inherently debilitating and perverting in giving one’s self over to cultural interests alone.” He continued: “I dislike to think that an interest in art, poetry, or other forms of esthetic appreciation”—all of which Goodwin, Jones, and Patterson demonstrated—would lead them to embrace behavior “which a healthful being would desire to have eliminated.”

While he did not come up with any definitive answers, by 1926 Dartmouth began to enlist local women to perform in its plays. No Dartmouth man would any longer be tempted into degeneracy on the slippery slope of dressing in drag.

Nicholas L. Syrett is a professor of women’s, gender, and sexuality studies and an associate dean at the University of Kansas. He is the author of The Company He Keeps: A History of White College Fraternities (2009). Sarah Hartwell assisted him in research for the book.