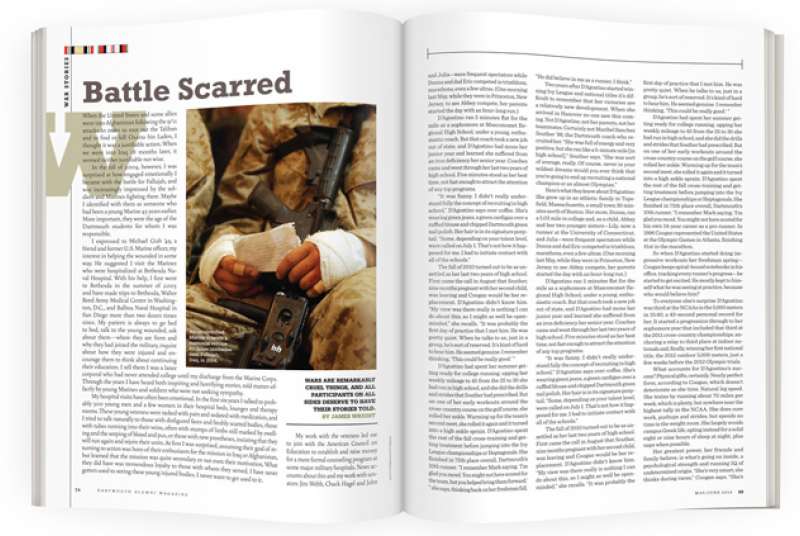 Wars are remarkably cruel things, and all participants on all sides deserve to have their stories told.
James Wright | Sept - Oct 2012

When the United States and some allies went into Afghanistan following the 9/11 attacks in order to root out the Taliban and to find or kill Osama bin Laden, I thought it was a justifiable action. When we went into Iraq 18 months later, it seemed neither justifiable nor wise.

In the fall of 2004, however, I was surprised at how engaged emotionally I became with the battle for Fallujah, and was increasingly impressed by the soldiers and Marines fighting there. Maybe I identified with them as someone who had been a young Marine 45 years earlier. More important, they were the age of the Dartmouth students for whom I was responsible.

I expressed to Michael Gish ’49, a friend and former U.S. Marine officer, my interest in helping the wounded in some way. He suggested I visit the Marines who were hospitalized at Bethesda Naval Hospital. With his help, I first went to Bethesda in the summer of 2005 and have made trips to Bethesda, Walter Reed Army Medical Center in Washington, D.C., and Balboa Naval Hospital in San Diego more than two dozen times since. My pattern is always to go bed to bed, talk to the young wounded, ask about them—where they are from and why they had joined the military, inquire about how they were injured and encourage them to think about continuing their education. I tell them I was a lance corporal who had never attended college until my discharge from the Marine Corps. Through the years I have heard both inspiring and horrifying stories, told matter-of-factly by young Marines and soldiers who were not seeking sympathy.

My hospital visits have often been emotional. In the first six years I talked to probably 300 young men and a few women in their hospital beds, lounges and therapy rooms. These young veterans were racked with pain and sedated with medication, and I tried to talk naturally to those with disfigured faces and freshly scarred bodies, those with tubes running into their veins, often with stumps of limbs still marked by swelling and the seeping of blood and pus, or those with new prostheses, insisting that they will run again and rejoin their units. At first I was surprised, assuming their goal of returning to action was born of their enthusiasm for the mission in Iraq or Afghanistan, but learned that the mission was quite secondary or not even their motivation. What they did have was tremendous loyalty to those with whom they served. I have never gotten used to seeing these young injured bodies. I never want to get used to it.

My work with the veterans led me to join with the American Council on Education to establish and raise money for a more formal counseling program at some major military hospitals. News accounts about this and my work with senators Jim Webb, Chuck Hagel and John Warner on the GI Bill of 2008 resulted in some recognition and some curiosity, because I was a former Marine and Ivy League president working with veterans.

I began sending a package to any Dartmouth graduate who I learned was serving in Iraq or Afghanistan. These parcels included Dartmouth caps and T-shirts, maple candy and a book of Robert Frost poetry. A grad who was serving as a platoon leader in Iraq wrote me to say none of the men in his platoon had a college education and he had taken to reading them a poem when they returned from patrols. He reported they enjoyed Frost’s poems and were asking for more. This affirmed for me that not only was there a place for ROTC on campuses such as mine, but there was also a place for liberal arts graduates in the military.

When I stepped down from the Dartmouth presidency in 2009 I remained concerned that so much of the obvious public support for veterans was transitory, if not superficial. The wounded particularly faced a lot of problems, and it was not clear that most Americans understood these issues—and I wanted to try to understand them better.

Most Americans have never served in combat. They have no conception of the reality of war. As I have tried to understand this experience through reading and conversations, I acknowledge my own very real limits. One Korean War veteran who had served as a prisoner of war and had escaped from the massacre of a group of prisoners, said that when he tried to talk about his experience, people would say, “Oh yeah. I know. I read about that.” He observed, “You can read about it all you want, but you’re not going to understand how it was.”

Wars are by and large transitory things, occasional distractions perhaps, for those who are not fighting them and whose loved ones are not fighting. The less realistic the broader society’s image is of combat, the easier it is for society to put the reality of war behind. What is missing, then, is a clear understanding of what society has imposed upon some of its young citizens, what their countrymen have asked of them. Those who served will not put it behind.

War is about national strategy and national defense and patriotic pride and geopolitical calculations. And it is about misunderstandings and miscalculations, stupidity and malice, and sometimes about the consequences of accidents. War is about strategic agendas and epic battles that define nations and shape history. War is about courage and heroism. It is also about pain and suffering, sorrow and tragedy. But combat, the process of actually fighting a war in the dirt and the mud, in airplanes or upon ships at sea, is about those who finally are sent out to implement these national strategies—and they have more immediate concerns than the national goals or considerations.

People in combat become consumed with tactical problems and personal needs. In the final accounting, combat becomes intensely personal. Within the framework of an immediate tactical military objective, within a military unit with clear hierarchy and crisp differentiation of authority and responsibility, combat is about simply staying alive, about protecting and aiding those in your unit and about deadly confrontations with those who share with you the impulse for their own self-preservation. A study of those who fought in America’s wars confirms the constant “overriding desire to survive,” regardless of the purpose of war or nature of combat.

Most human beings learn as infants to remember two constant things: to look out for themselves while avoiding any threatening risks, and not to harm another human being—and the latter is emphasized under threat of law as well as moral code and religious teachings. When young men are mobilized for war, those who train them have to impose a sense of discipline and focus that enables those in combat to subordinate these fundamental principles when the situation demands. When they are demobilized, they are told to return to their first rules, forget that which they have just learned and wipe from their memory contrary experiences. In each instance, this is impossible. The former, training for war, is sufficiently successful to engage in winning battles. The latter, un-learning and forgetting what they have just experienced, may not be possible for those who encounter the horror of war.

Most veterans attribute their ability to engage in combat to simple fear as well as pride. No one wants to let others down or appear to be wanting in the necessary courage to engage. It is essential to suppress reason, at least civilian reason.

Combat veterans then return home. They must suppress their combat experiences in order to return successfully to civil society. But even if these experiences are successfully suppressed, they cannot be forgotten. Each of these tasks of learning and unlearning comes at some cost, and the cost is an intensely personal one that is not borne by society.

James Wright served as a  Marine from 1957 to 1960 and as Dartmouth president from 1998 to 2009. Adapted with permission from Those Who Have Borne the Battle: A History of America’s Wars and Those Who Fought Them by James Wright, now available from PublicAffairs, a member of the Perseus Books Group © 2012.