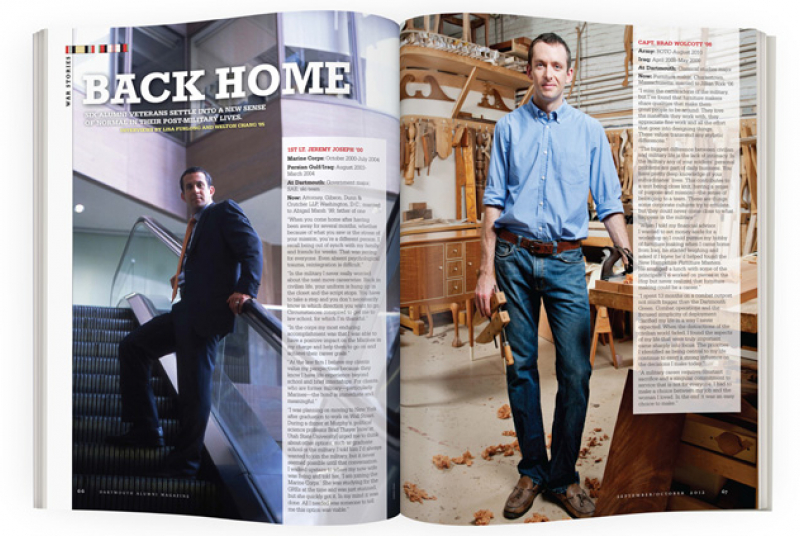 “When you come home after having been away for several months, whether because of what you saw or the stress of your mission, you’re a different person. I recall being out of synch with my family and friends for weeks. That was jarring for everyone. Even absent psychological trauma, reintegration is difficult.”

“In the military I never really worried about the next move careerwise. Back in civilian life, your uniform is hung up in the closet and the script stops. You have to take a step and you don’t necessarily know in which direction you want to go. Circumstances conspired to get me to law school, for which I’m thankful.”

“In the corps my most enduring accomplishment was that I was able to have a positive impact on the Marines in my charge and help them to go on and achieve their career goals.”

“At the law firm I believe my clients value my perspectives because they know I have life experience beyond school and brief internships. For clients who are former military—particularly Marines—the bond is immediate and meaningful.”

“I was planning on moving to New York after graduation to work on Wall Street. During a dinner at Murphy’s, political science professor Brad Thayer [now at Utah State University] urged me to think about other options, such as graduate school or the military. I told him I’d always wanted to join the military, but it never seemed possible until that conversation. I walked upstairs to where my now wife was living and told her, ‘I am joining the Marine Corps.’ She was studying for the GREs at the time and was just stunned, but she quickly got it. In my mind it was done. All I needed was someone to tell me this option was viable.”

“I miss the camaraderie of the military, but I’ve found that furniture makers share qualities that make them great people to be around: They love the materials they work with, they appreciate fine work and all the effort that goes into designing things. These values transcend any stylistic differences.”

“The biggest difference between civilian and military life is the lack of intimacy. In the military any of your soldiers’ personal problems are part of daily business. You have pretty deep knowledge of your subordinates’ lives. This contributes to a unit being close knit, having a sense of purpose and mission—the sense of belonging to a team. These are things some corporate cultures try to emulate, but they could never come close to what happens in the military.”

“When I told my financial advisor I wanted to set money aside for a workshop so I could pursue my hobby of furniture making when I came home from Iraq, he started laughing and asked if I knew he’d helped found the New Hampshire Furniture Masters. He arranged a lunch with some of the principals. I’d worked on pieces at the Hop but never realized that furniture making could be a career.”

“I spent 13 months on a combat outpost not much bigger than the Dartmouth Green. Combat operations and the focused simplicity of deployment clarified my life in a way I never expected. When the distractions of the civilian world faded, I found the aspects of my life that were truly important came sharply into focus. The priorities I identified as being central to my life continue to exert a strong influence on the decisions I make today.”

“A military career requires constant sacrifice and a singular commitment to service that is not for everyone. I had to make a choice between my job and the woman I loved. In the end it was an easy choice to make.”

“We got home from deployment and a week and half later I’m standing in the Denver airport holding my sons, about to take off my uniform, and I’m wondering, ‘Did anyone even realize I was gone?’ It’s not a whole lot different now. There was a bit of interest when Osama bin Laden was killed, but people don’t pay that much attention on a day-in-and-out basis. I keep up with what’s going on, but even I spend more of my day paying attention to the price of gold than to combat operations.”

“A lot of what I do now—running a gold exploration field in Wyoming, working with drillers—is very similar to what I did in the military as an officer: supervising a project with defined goals and many, many pieces.”

“Serving with others recalled from civilian life was completely surreal, like something out of Catch-22 come to life. We had a major who actually wanted to get hit by an IED; we had a battalion commander who constantly had to remind everybody that he was the battalion commander—he said this several times each day. We had another major who was amazed by the genius of the rubber-band ball. And we had a higher headquarters that was totally dysfunctional. Once I was called on two separate phones in the same office by individuals sitting not five feet from each other. Once I had to take a butt chewing because I refused to order soldiers to put a fuel-loaded semi-truck with admitted brake problems into a convoy.”

“I wish I could have put my professional skills to work in the Army. I would have felt I’d used them to the benefit of a mission rather than sitting and looking at a computer screen tracking trucks all day.”

“When I came home it was overwhelming to have so much free time, so many choices—and to be driving a car after military vehicles.”

“While I was preparing to give birth to my daughter, Willa, last year, I told my husband, ‘When I go into labor I want you to remind me of all the things I’ve been through that were so much worse—this march, that run, that horrible time in the rain.’ In the midst of my labor he started rattling off all the examples I’d given him, and I was practically screaming, ‘This is harder than any of those.’ ”

“I loved the physical and mental challenges of the military and scored the maximum on the fitness tests. I miss the morning physical training when we’d meet as a platoon or company to run or workout. I miss the feeling of belonging to a team.”

“I don’t think my military experience was all that different because I was a female, but I did have some challenges when, as a lieutenant, I replaced a major and a lieutenant colonel. Because I was in charge of daily operations at forward operating base Salerno, I had to run a weekly meeting attended by two lieutenant colonels and some majors. They did a nice job of recognizing and supporting me.”

“I had a couple of run-ins with my battalion commander over him not recognizing the depth of responsibility my soldiers and I had and not issuing the appropriate recognition. I knew I’d be getting out, but I was standing up for my soldiers. There were some tense moments when he threatened to fire me, but it turned out okay.”

“Most Afghan men I interacted with were respectful. One man I worked with a lot would never look me in the eye. When I asked why, he explained that it wouldn’t be proper because I wasn’t a member of his family. In another case I had an Afghan contractor who clearly didn’t like taking orders from a woman. I told him he could do as I said or lose the business.”

“I’m still transitioning back to civilian life. Sometimes it’s realizing I should take things a little less seriously or be a little more patient.”

“I was on the cross-country ski team, and I’m married to an Olympic athlete, so training has always been a big part of our lives. I missed that in the military. I started bike racing so I’d have something to train for and compete in.”

“Working for a power company in Minneapolis when I got home, I found myself using the leadership and management skills I learned in the Marines: You have to have government oversight, you work through state and local permitting processes, you’re crossing the property of numerous land-owners. Again it was the intersection of government, public and private sectors.”

“When I was doing economic and political analysis in the Marines I spent a lot of time with generals and colonels. They always teased me about being from a liberal, Northeastern school. I’d tease them back and say there’s only one of us here who graduated from a college whose president is a Marine. And they would all laugh.”

“My freshman year I was very involved with Why War?, a group that opposed the then pending war in Iraq. When I finished school I was thinking, ‘War is a terrible thing, but we live in a world that still needs militaries, and those militaries need educated, ethical leaders.’ I thought I could be one of those.”

“When I got out of the Army I thought about grad school, but I wanted to get into the workforce quickly. I wound up with a company in California and was still getting used to going into an office and not wearing a uniform when my employer sent me to Iraq for six months. That slowed the process of adjusting back to civilian life.”

“The difference between Afghanistan and Iraq and being in a military setting as a civilian threw me. How the military was handling things freaked me out: Everyone was walking around with unloaded weapons. Having come from Afghanistan, where you always had to have your weapon loaded to be ready to fight back if you came under attack, I felt very uncomfortable. Alarm bells kept going off in the back of my head.”

“While I was deployed I had many late nights with my battalion executive officer. One night when we were talking about Army standards he admitted, ‘The Army breeds mediocrity,’ and I agreed. Because the Army lowered its standards to bring more bodies in to fight in our recent wars, we’ve got people running around who shouldn’t be in the service. How could I continue to be proud of supporting an organization that succeeds at being average? Pride was a big part of the reason I joined the Army, so taking that away took away most of my impetus for staying in. I have an ongoing concern that many good officers feel frustrated and decide to leave the Army. It creates a filtering effect that means our best and brightest don’t stay in and go to the top.”