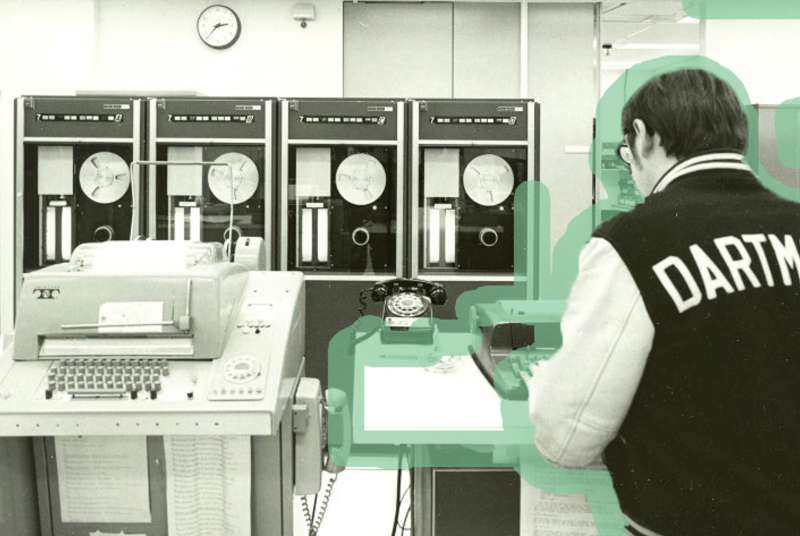 Math professor Tom Kurtz woke early one Tuesday morning in 1958 and left his Hanover home to travel five miles to the train station in White River Junction, Vermont. He carried a steel box as he boarded the 6:20 train to Boston.

Three hours later, at the Massachusetts Institute of Technology’s computer center in Cambridge, he opened the steel container. It held hundreds of cardboard cards, each measuring about 3 inches tall by 8 inches long. Some of those cards, precisely ordered and wrapped with a rubber band, contained a computer program Kurtz wanted to run. On other cards were the programs of his colleagues—Dartmouth was a participant in the New England Computation Center at MIT, which shared an IBM mainframe computer. Kurtz handed his cards to an employee and walked away.

Late in the afternoon, he returned to pick up the cards and the precious printouts from running the programs. On the evening train home, Kurtz noticed the results contained error reports—yet again. He figured he would be able to rewrite his program in the coming days, repunch the appropriate cards, and repeat the process all over again—two weeks later.

Individual access to computing back then was so rare, and so valuable, that Kurtz was willing to devote an entire day to receive a few seconds or minutes of computing time. He, along with math department colleague John Kemeny, would soon lead the charge to change that. In 1961 or 1962, Kurtz approached Kemeny with a three-pronged proposal. First, Kurtz wanted all Dartmouth students to have computing access. Second, that access should be free. Finally, he believed the first two features could be accomplished through a new mode of computing called time-sharing, in which multiple users simultaneously shared the resources of a powerful central computer. A user could run programs and receive results via a teletypewriter terminal connected to the computer by phone line.

If the results included error messages, the user could stay at the terminal to debug his program. Time-sharing promised programming and debugging in minutes—not days or weeks—a big change from the batch processing Kurtz experienced on his MIT computing trips.

Kemeny, Kurtz, and the undergraduates who actually programmed the time-sharing network (led by Michael Busch ’66 and John McGeachie ’65) elevated users’ needs. They focused on maximizing convenience for each user. During the 1960s other universities, including Carnegie Mellon and MIT, had time-sharing systems, but they were used almost exclusively by scientists and engineers. Dartmouth’s drive to making computing easy to use by as many individuals as possible set it apart.

BASIC became the language by which people personalized their computing. Even beginner-level students could write powerful programs.

For example, in 1967 it took a Williams College senior 50 hours to write a ski jump scoring program in FORTRAN, a prominent programming language at the time. The same year, a Vermont ski instructor needed only 10 hours to write a similar ski meet program using BASIC.  Many members of the class of 1968—the first group required to learn BASIC—recalled courtship in connection with computing. Francis Marzoni ’68 used the time-sharing system to create a huge printout proclaiming, “HEY GIRL I MISS YOU,” for his girlfriend in New York City. Medford Cashion III ’68 wooed his Winter Carnival date by composing a romantic text for her and “making this BASIC program hold it in memory for the proper moment when [she] would see this printout and be overwhelmed by [my] computer prowess.” David Ziegler ’68 recalls flirting with his eventual wife of four decades over the time-sharing system while he was at Dartmouth and she was at Mount Holyoke.

The values of individualized, interactive computing became embedded in the Dartmouth system through BASIC and time-sharing. Playing games such as Poker, Football, and the war game Salvo42 made computing personal and social for Dartmouth students. They sat in the public teletype room playing individual games, but with the companionship of their computer center buddies. This sociability became more explicit and pronounced when the Kiewit Computation Center staff added something unheard of: a multiplayer feature to Football and other games. Students could now sit at individual teletypes in Kiewit, around campus, and across New England to socialize, interact, and play games on the Dartmouth network.

“The heart of the time-sharing system is…BASIC,” Kemeny declared in 1964. It gave schools and their students and teachers the right tool for making the most of their time-sharing network at no charge, except for phone bills. All a school needed was a teletype, which could be rented, and a long-distance phone line that connected to Dartmouth’s mainframes.

The Dartmouth Secondary School Project, which formally ran from 1967 through 1970, connected students and educators in 18 public and private high schools from Connecticut to Maine, ranging from rural farming communities to elite boarding schools. The students loved it. They saturated the available teletypes for up to 12 hours a day, six days a week. Some young men at Phillips Exeter Academy woke at 4 a.m. to use the teletype.

Students shared news from school to school. Files could be accessed, updated, and read by any student on a teletype in the secondary school network. They created an imaginative range of programs that wrote haiku, prepared tax returns, scored sailboat races, and designed a school newspaper. The games and simulations they devised included horse racing, roulette, poker, basketball, bowling, hockey, and soccer.

Hanover elementary and high school students formed a computer club, which gained several hundred members in the 1964-65 school year. They used the Dartmouth network to score a gymnastics tournament, ski events, and a debate tournament with 150 teams. Students soon combined the novelty of computing with gaming. David Hornig, 12, programmed a version of solitaire called “Round the Clock” on the Dartmouth network as a summer project, and Julia Hawthorne, 13, developed a game of checkers. A fifth-grader wrote a program for factoring integers.

BASIC quickly spread beyond New England. It traveled to Minnesota, where the game The Oregon Trail was written in BASIC and played on teletypes on the Minneapolis public schools’ time-sharing network in 1970. It journeyed to California, endorsed by the People’s Computer Company newsletter, and BASIC became the nationwide language of computer people—well before the personal computer revolution of the 1980s. In a move that Apple would emulate a decade later, Digital Equipment Corp. supported its minicomputer market by putting BASIC on its machines and publishing educational materials that showcased BASIC.

During the 1960s and 1970s, access to a computer (whether a mainframe, a mini, or, eventually, a personal computer) was not enough to ensure an enjoyable, productive, or meaningful interactive computing experience. Most people needed a way to transform the computer into a tool for personal or social use. BASIC became the language by which people personalized their computing.  In his influential 1974 manifesto, Computer Lib: You Can and Must Understand Computers Now, computer visionary Ted Nelson urged people to learn BASIC. “If you have the chance to learn it, by all means do,” he wrote.

Nelson recognized that BASIC had been “contrived specifically to make programming quicker and easier,” yet it was “a very serious language” for “people who want simple systems to do understandable things in direct ways that are meaningful to them and that don’t disrupt their companies or their lives.”

Joy Lisi Rankin (joyrankin.com) is the author of A People’s History of Computing in the United States (Harvard University Press, 2018), from which this is adapted. She majored in math and history.