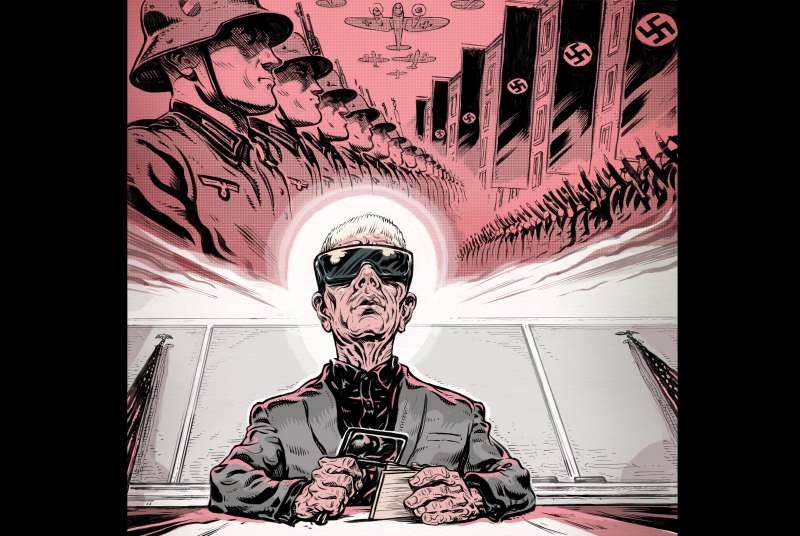 The threat of poor grades didn’t deter this student from signing up for courses with history professor J.C. Adams.
Joe Gleason ’77 | Mar - Apr 2018

I wasn’t convinced. “I can’t take that class. I’m a freshman. I’m supposed to take ‘History 5’ with Shewmaker.”

“Adams is going to retire this year. And he’s teaching only two more classes. One this fall, the other this winter. You should take both of them.”

“It would be better than not taking them.”

So, I dutifully signed up for “The History of the World Since 1919,” bought the textbook and trudged to Reed Hall, where I took a seat among the 50 upperclassmen who deserved to be in the room. I arrived early, which was lucky, as more than 100 people eventually crowded into the auditorium.

The room grew quiet as the first of Baker’s bells signaled the start of class. The door at the back of the room opened, and I turned to see an elderly man shuffling down the aisle with a tripod cane. His white hair stood straight up from his head in a crewcut, a worrisome sign in those days. He wore a gray suit with a buttoned-up black shirt and the largest and blackest pair of cataract sunglasses I had ever seen. They wrapped around his face, blocking light from all sides.

My brother is hazing me, I thought as Adams slowly made his way to the front of the class. There was no way I could relate to this relic.

When Adams sat down, I almost groaned aloud. He’s going to teach the class from his chair? I wanted to strangle Jim and wondered if I still could transfer out of the class. I squirmed in my wooden seat and readied myself for a 70-minute snooze.

Adams swept our attention into his firm embrace and transported us across time.

Adams pulled out a stack of yellowed 3-by-5 index cards and arrayed them on his desk. Next came a huge rectangular magnifying glass, the kind my grandmother used for reading the paper. He’s going to read to us, I thought. What a joke.

Adams lifted the first index card off his carefully arranged stack, drew it before his huge magnifying glass and lifted his head. I had the distinct impression he wasn’t looking at the card.

And then he opened his mouth to speak.

His deep voice carried across the room with such resonance and authority that every head in the room lifted. With an intonation somewhere between James Earl Jones and Walter Cronkite, Adams swept our attention into his firm embrace and transported us across time and space until we found ourselves in the Hall of Mirrors at the Palace of Versailles just outside Paris in 1919.

We watched as the pale and nervous German foreign minister, Hermann Müller, blinked into the blinding light of the mirrored hall before picking up a pen to sign what his fellow citizens would come to call “the Diktat.”

The treaty forced Germany to acknowledge guilt for the recently ended war and promised reparations for damages inflicted on the allied nations. The terms “guilt” and “reparations” took on an ominous tone coming from Adams’ mouth, as if they foreshadowed the dawning of the apocalypse. I would learn weeks later how much they did.

J.C. Adams taught history at Dartmouth for 34 years. An expert in Balkan and Russian history, Adams was a graduate of the University of Pennsylvania and received his M.A. and Ph.D. in modern European diplomatic history from Duke. In 1937 he did postdoctoral work in prewar Europe and served with U.S. Army military intelligence during WW II. He received the Bronze Star and one battle star before his discharge as a major in 1945.

“John made history come alive,” eulogized fellow history professor Charles T. Wood when Adams died in 1986. “And his courses were always filled.” Revered by his students, Adams also was renowned for his tough grades. He was so tough, Wood explained, “his was a course that the seniors took in the spring after they had been admitted to law school.”

Exactly one hour and 10 minutes after Adams had begun my first class with him, the Baker bells began to chime again, and Adams put down his last index card. “Until Wednesday,” he promised. I couldn’t wait.

In the following weeks Adams had us careening through the cataclysm that was Germany in the wake of the war to end all wars. As the Weimar Republic struggled to assert itself, ultra-nationalist parties attacked it for betraying the fatherland. Centrist candidates and mainstream leaders were assassinated in the street. Violent putsches flourished, one so successful that the government had to flee from Berlin to Dresden.

We rode what Adams called the “toboggan slide” of the German mark as it fell from 4.2 marks to the dollar in 1914 to 4.2 trillion to the dollar a decade later. When the Germans failed to keep up with their reparations, we saw the Allies occupy the Ruhr. Despite Allied efforts to stabilize the mark and the German economy, one weak government followed another until the rise of the National Socialist German Workers Party, or, as we have come to know it, the Nazi Party.

“Ah, I am reminded by the date,” Adams’ voice rumbled through the classroom, ominous in its implication. “The midterm examination is Wednesday next. It is yet but a cloud on the horizon, but let me assure you…it is an ever-darkening cloud.”

A few chuckled, but I got the distinct impression that Adams wasn’t joking.

Later in the course, Hitler’s movement spread through the nation’s beer halls, fomenting a hatred for Jews and tapping a country’s resentment of its occupation. Violence became the signature of German politics. And Adams gave us a ringside seat. We witnessed the fear that Hitler instilled in his countrymen—so pervasive that he replaced the words “hello” and “goodbye” with his own name.

I discovered that history is not about the past. It is about the present.

With Adams’ voice reverberating throughout the room, we watched the procession of arms and men marching down Berlin’s Voss Strasse to the German chancellery: “When they reached the reviewing stand,” he rumbled, “the elite guard of the German infantry, the Wachtruppe, snapped their left arms upward in salute of der Fürher and they commenced the stechschritt, a march that is mockingly called in the West ‘the goose step.’ ”

Someone in the classroom chuckled. Adams’ head snapped up from his index cards. He frowned. For the first time I could remember, he addressed a student directly. “It was not the sight of the goose step that made it impressive,” he said. “It was the sound of 10,000 boots pounding the cobblestones at the exact same instant and thousands of voices around you shouting, ‘Sieg heil! Sieg heil! Sieg heil!’ ”

Adams offered up a rueful smile: “And you are a nice young graduate student doing postdoctoral work in Germany. What do you do?”

I felt a trickle of sweat roll down my back. He was there. And he left us to wonder what we would do in his place. I, for one, wasn’t so sure.

As the fall turned toward winter, Adams’ stories drew us forward in time: the Marshall Plan, the Berlin airlift, the Cuban missile crisis, the assassination of President Kennedy, the Vietnam War, Nixon’s visit to China. As he came closer to the present, I had to reconcile my personal memories with the more worldly account that Adams shared with us. On the last day of class Adams covered the news from that morning’s newspaper, bringing “The History of the World Since 1919” truly up to date.

Adams took history out of the books and made it come to life. It was no longer an abstract discussion of sociopolitical movements with little impact on my daily life—it was the precursor to all that defines the world today. For the record, I passed and also took his other class on modern world history. I felt lucky to pull down a C in both. And I discovered that history is not about the past. It is about the present. I’ve been trying to keep up with it ever since.

Joe Gleason is a public relations consultant in Clifton, Virginia, and the author of the historical novel, Anvil of God.