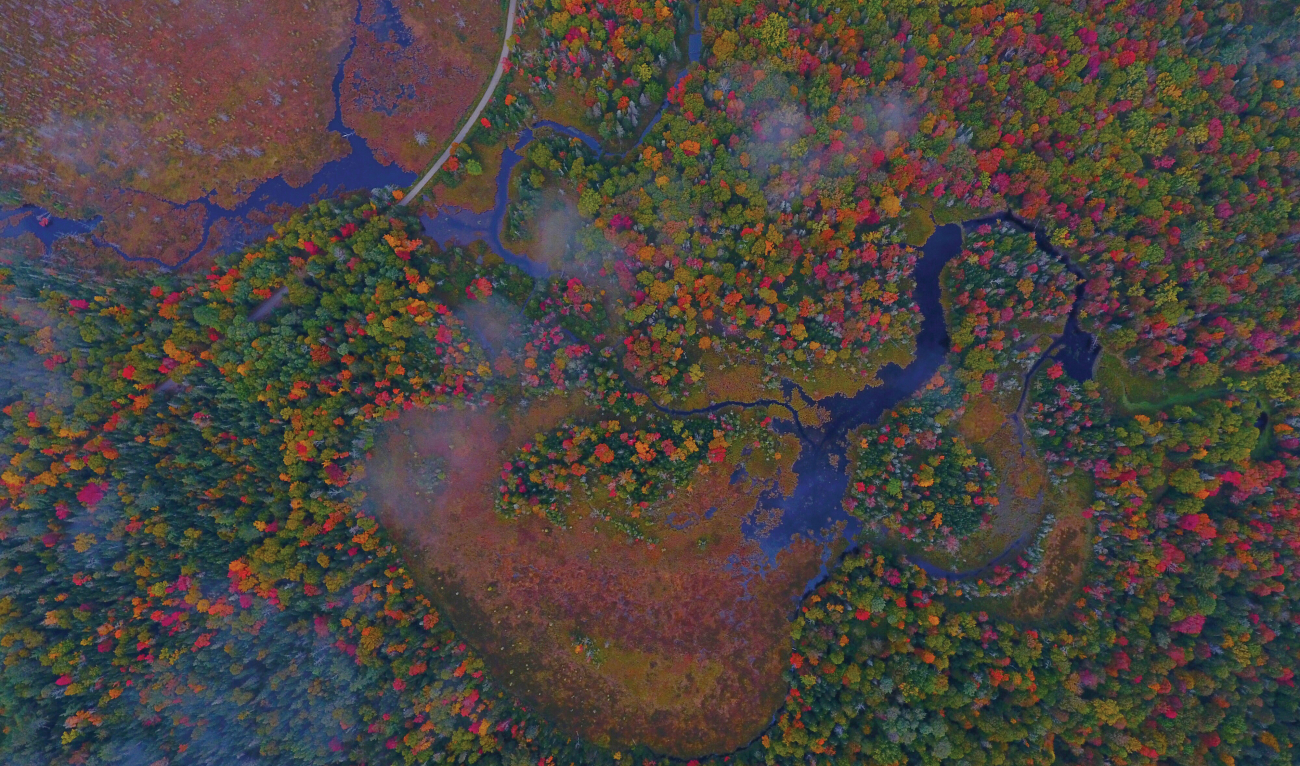 The Fate of the Forest

As researchers descend on the Second College Grant to forecast the future of New England’s trees, Dartmouth’s most underutilized classroom finally gets its due.
Svati Kirsten Narula ’13 | Jan-Feb 2020

Under the sweltering sun of a late July afternoon, in a one-acre clearing in New Hampshire’s North Woods, Tony D’Amato points out a young red oak sapling. “That’s the future of our forest,” he says. Red oaks are expected to thrive in these dry, hot, sunny days that are becoming more common in northern New England.

Then D’Amato, a forestry and ecology professor at the University of Vermont, chides a surprisingly healthy-looking baby balsam fir for “not listening to the climate models.” Balsam firs aren’t expected to grow well in this special plot, which was clearcut to eliminate shade and model one possible future for the forest. These seedlings were planted in May 2018. There’s no telling which, if any, will be the most viable in the future.

D’Amato and Chris Woodall, a U.S. Forest Service ecologist, are in charge of a long-term science experiment to determine how forest managers across North America, including Dartmouth forester Kevin Evans, might adapt. It’s called the Adaptive Silviculture for Climate Change (ASCC) study, and the findings will likely shape decisions the U.S. Forest Service has to make about timber harvesting, recreation, and even wildfire prevention on public lands.

Four hundred acres of the Grant have been enlisted in the ASCC study and groomed, in roughly 25-acre blocks, to model four unique management strategies. We’re standing in one of the “transition” plots, where D’Amato and Woodall hope to grow an altogether new kind of forest, having planted a mix of American chestnut, balsam fir, red oak, black birch, red spruce, bitternut hickory, pin cherry, eastern hemlock, eastern white pine, and big-tooth aspen. Northern New Hampshire is out of the historical range for many of these species, but some day the Grant may feel more like Connecticut and be just right for them. The transition doesn’t happen overnight, or even over a decade. “Forests take a long time to transition,” says Woodall. “The important thing is that you start on that path.” What happens to the trees in this transition plot during the next decade or longer will likely influence the decisions that Dartmouth’s next forester makes about managing trees throughout the Grant.

Traipsing into one of the experiment’s “control” zones, where the trees have gone untouched, we find a darker, more damp forest. We tread on four types of ferns. “You have fewer options in a forest like this,” says D’Amato, noting that this mix of trees, thriving in the shade, is less able to survive droughts.

The “resistance” zones model what happens if Evans continues to manage the forest as usual, climate change be damned: Here, each stand of trees has been cut to a density that is most favorable for sugar maples, though beeches and birch grow alongside them.

The plots designed to model a “resilience” strategy, however, have been thinned to allow more sunshine, conditions that favor yellow birch. The species, native to New Hampshire, hasn’t been able to compete well with maple and beech in this area, but ecologists predict that forests with more yellow birch might survive better in a world with more sun—and more ice storms. 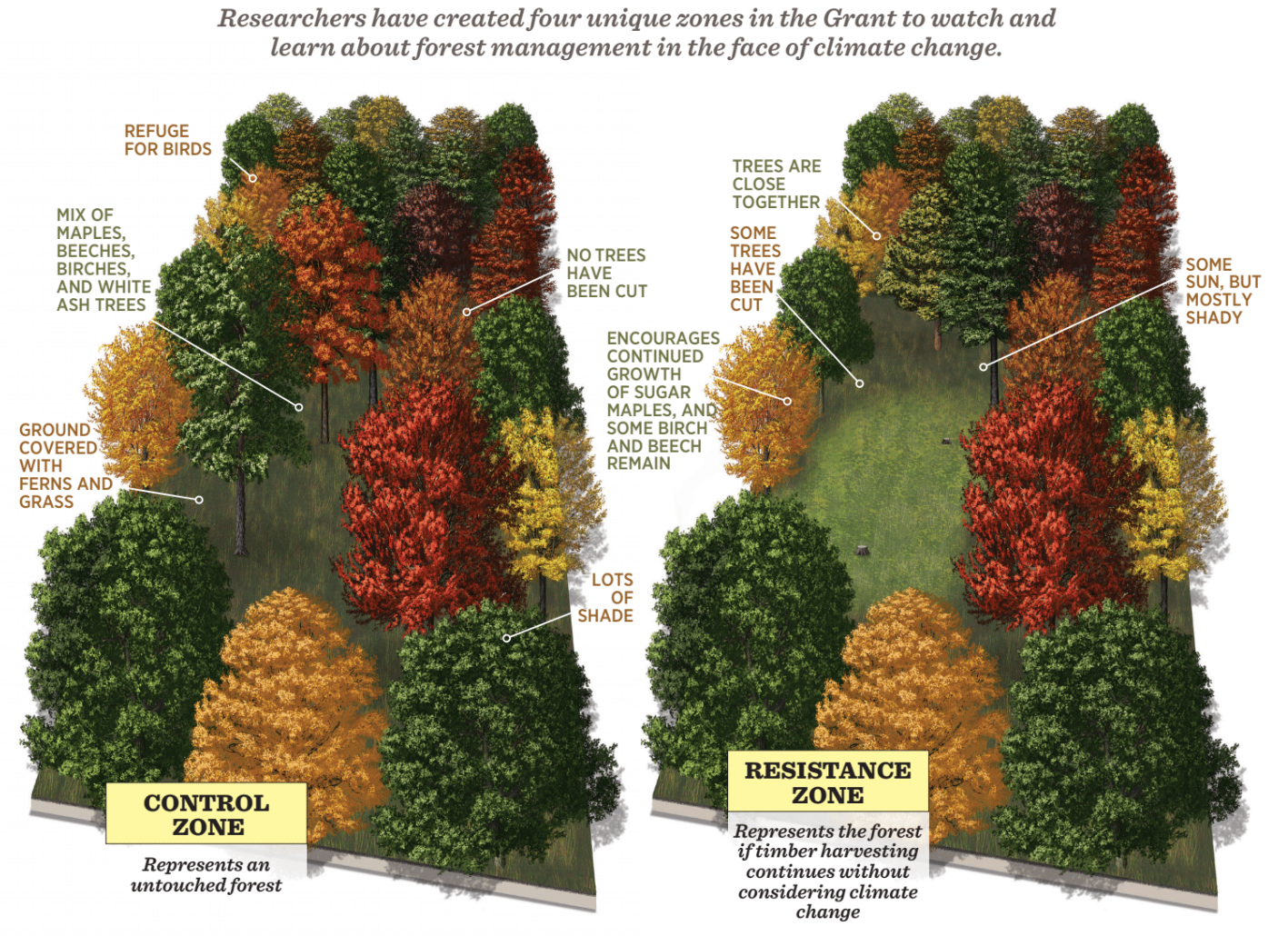 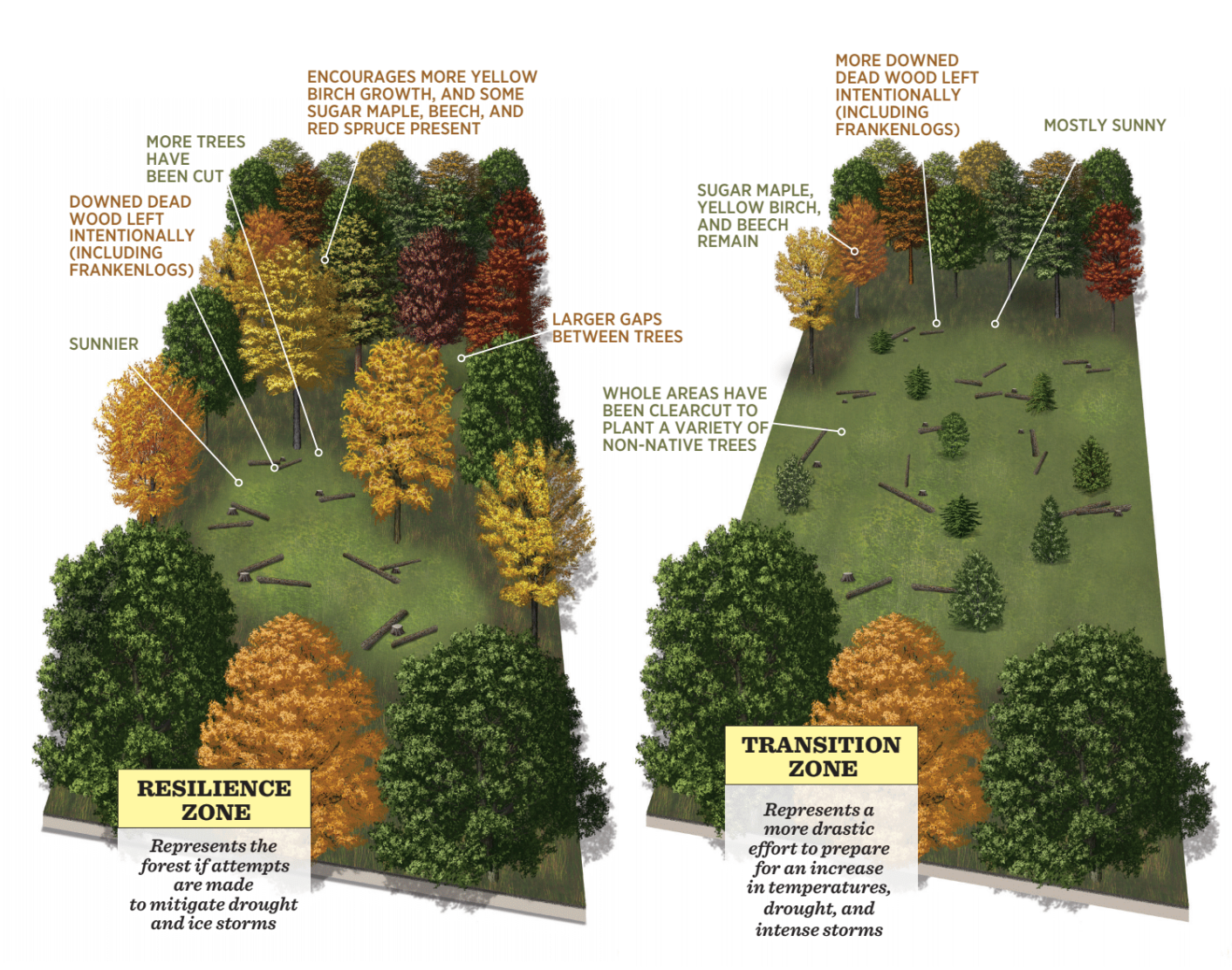 The experiment at the Grant is one of six ASCC sites across the country, and a result of more than $1.5 million in funding from various sources, including the U.S. Forest Service and the Northeast Climate Science Adaptation Center, which is run by the U.S. Department of the Interior. Woodall and D’Amato chose the Grant in part because it’s a so-called working forest, where timber is harvested regularly and there are few bureaucratic hurdles to clear when it comes to cutting, or choosing not to cut, wood.

“In a year we went from design to implementation, and that would not have happened anywhere else,” says D’Amato. “Largely it’s because of Kevin.”

Evans welcomed the opportunity to host the ASCC study at the Grant because he’s a believer in the land as a prime—and underutilized—research space. And the design of the ASCC study, with preplanned cuts to the forest, lends itself nicely to additional layers of ecological research, the findings of which could shape environmental public policy for years to come.

“For the last 20 years we have been trying to get people at the College to do research at the Grant and not been very successful with our efforts,” says Evans. “But since the experiment started, we’ve had many other people ask to do research on the site.”

Dave Lutz, a Dartmouth professor of environmental studies, wanted in as soon as he heard about the ASCC study. He knew that ASCC was all about silviculture, or the health of the trees, but he wanted to investigate other pieces of a changing forest. “When you cut things down, it’s not just the tree that changes,” he says. “Everything else changes, too. So I thought, let’s look at the understory. You know, fly a drone that takes three-dimensional imagery and watch it grow back. Let’s put sensors down and look at microclimatological effects. Let’s look at birds and bats and bees and insects. You don’t get this opportunity often, to have this living lab.”

Not far from the baby balsam fir in that clearcut transition acre lies a 6-foot-long tree trunk. A thin yellow wire is visible on the log, which resides under a simple wooden stand labeled “#7” that’s fitted with a small, white box hooked up to a solar panel. Lutz had a hand in installing this “Frankenlog,” so called because it’s dead but coursing, mildly, with electricity. 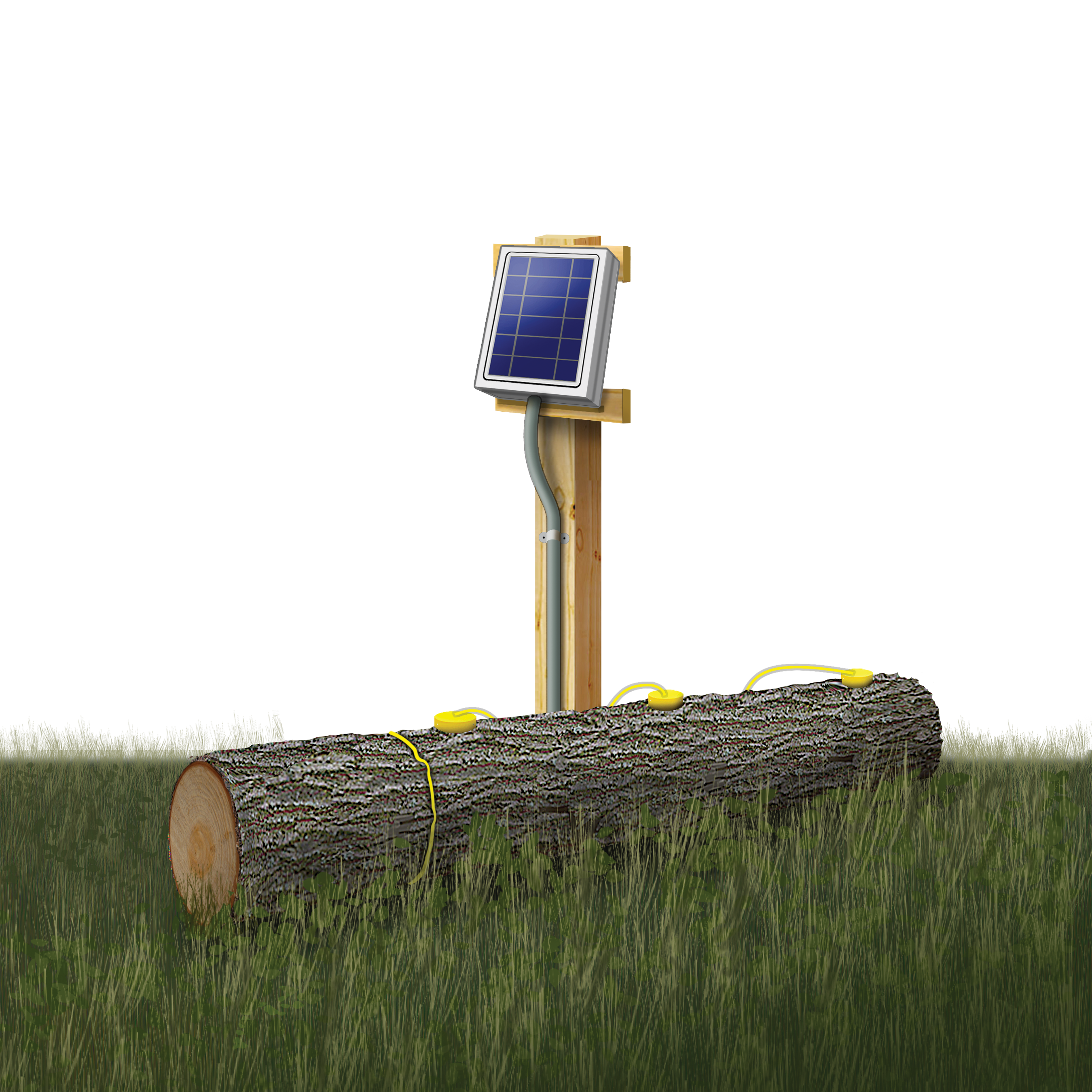 Sensors on three points of the log measure the temperature and moisture of the wood. Sensors placed in the nearby soil at various distances from the log collect data every 15 minutes. “We hope to keep it going an entire year, see what happens underneath the snowpack—to our knowledge, nobody’s ever looked at that,” says Woodall. “This could help validate national fire danger models, as far as seeing how fuel moisture changes after a big rain event.”

Twelve Frankenlogs populate the ASCC plots, with funding from the U.S. Forest Service’s National Fire Plan. Woodall, Lutz, and a handful of Dartmouth undergraduates, including Emma Hazard ’22, set them up. Hazard clarifies that all but the first Frankenlog are technically the “sons of Frankenlog,” and that the team has given some of them additional nicknames: “One of them is called ‘the cursed log’ because it took us two months to get anything running there,” she says.

The chestnut trees in the transition zones of the ASCC study, for example, weren’t planted just because D’Amato and Woodall thought it would be a good idea. Two other scientists from the University of Vermont and the U.S. Forest Service, whose years of chestnut research have been sponsored by the American Chestnut Foundation, attached themselves to the project to see how the trees would do in this environment.

“This project is almost like a field of dreams,” says Woodall. “If you build it, they will come. It’s been only a couple of years and people want to see it and they want to do research in it.” On the day DAM toured the Grant, a forest ecologist from Spain joined us with hopes of applying management techniques implemented here to the national forests of Spain.

That’s not to say the Grant was totally absent of scientific research before D’Amato and Woodall brought in the ASCC study. Evans and his assistant forester, Riley Patry, have long facilitated local research on woodcocks, wood turtles, and brook trout—all with practical consequences for forest management. In some cases, facilitating research simply means allowing students or state biologists access to the land. Other cases involve hands-on work, such as placing radio collars on moose. Often it’s a bit of both.

As we stand in the damp, shady control zone, Evans points out a mounted camera stand, one of two that Patry set up to monitor small mammal activity. Flying squirrels, gray squirrels, chipmunks, mice, pine martens, and bears have all succumbed to the peanut butter luring them in front of the lens. Resulting images include a yardstick that indicates snow depth and a thermometer that records temperature. The lithium battery powering the camera usually lasts all winter, says Evans. (“I can remember when it used to get to be 40 below,” he adds. “It doesn’t get to be 40 below anymore.”)

Evans has been setting a quick pace for us on our walk through the woods this day. The Fitbit on his wrist, dispensed by the College in an employee health initiative, regularly counts more than 10,000 steps before noon.

It can be hard to keep up with this man as he leads you sure-footedly through dense brush and humbling when, without breathing hard at all, he mentions moose tracks on the ground. You slow to look down, locate the tracks—and then look up to find Evans several meters ahead.

Everything that happens in the Grant—from cutting down trees to maintaining more than 70 miles of roads, with dozens of bridges and hundreds of culvert pipes that regularly need replacing—is basically up to Evans, who’s been the Dartmouth forester since 1993. He knows these 27,000 acres better than anybody, and he’s clearly delighted that 400 of them are now dedicated outdoor laboratories.

“He’s been itching for scientific collaboration ever since he’s been here,” says Lutz. The Grant’s primary value to the College has always come from timber harvesting, and it’s been best known to students as a place for hunting and fishing—the domain of the Bait & Bullet crowd. As Evans attracts more scientists and professors, that image will evolve. So, too, may the value of the wilderness as a part of the College’s real estate and academic portfolio.

Evans is quick to point out that there’s plenty of room for more science: “I have 26,600 acres left.”