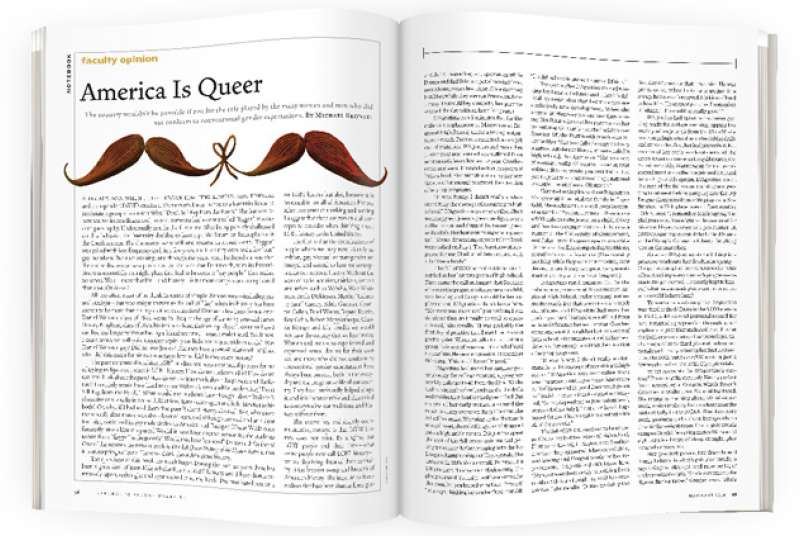 American history was made by many people who did not conform to conventional gender expectations.
By Michael Bronski | Sept - Oct 2011

A decade ago, when I first began teaching lesbian, gay, bisexual and transgender (LGBT) studies at Dartmouth, I was invited to a fraternity house to moderate a group discussion titled “Don’t Yell Fag from the Porch.” The frat was renowned for its rowdiness and, indeed, someone had recently yelled “faggot” at a student passing by. Undoubtedly not for the first time. After being publicly challenged on this behavior, the fraternity decided to host a public forum on homophobia in the Greek system. The discussion went well and became an annual event. “Faggot” was yelled with less frequency and, in a few years, the fraternity even had a few “out” gay members. But that evening, and through the years, what bothered me was that the entire discussion was predicated on the idea that Dartmouth, with its fraternities, was essentially a straight place that had to be open to “gay people.” That makes no sense. We all know that life—and history—is far more complex and complicated than that. Or do we?

All too often most of us think in terms of simple dichotomies—including gay and straight—but who might answer to the call of “fag” when its history has been shown to be more than a simple either/or question? Here are a few lines from a letter Daniel Webster, class of 1801, wrote in 1804 at the age of 22 to 23-year-old James Hervey Bingham, class of 1801, his intimate from their college days: “I don’t see how I can live any longer without having a friend near me, I mean a male friend. Yes, James, I must come; we will yoke together again; your little bed is just wide enough.” Was Daniel Webster gay? Did he love James? Did they have a sexual relationship? If so, what did this mean for his two marriages later in life? Is this queer history?

The past 10 years of teaching LGBT studies has been a continual process for me of trying to figure out what is LGBT history. How do we understand it? How do we use it to think about the past? How do we use it to think about the present and the future? I certainly would have liked to quote Webster’s words while moderating “Don’t Yell Fag from the Porch.” What would the students have thought about Webster’s obsessive desire to lie in bed with his friend James once again and hold him fast to his body? Or, what if I had told them that poet Richard Hovey, class of 1885, who wrote the school’s alma mater, was also a lover of men, and although married and an ardent feminist, socialized in gay male circles in America and Europe? (Oscar Wilde once famously hit on him at a party.) Would it have been another reason for the students to not shout “faggot” as frequently? Would this have “queered” Dartmouth for them? One of the reasons my newest book is titled A Queer History of the United States is that it is attempting to “queer” how we think about American history.

The questions of this book are much larger. During the past 40 years there has been a great deal of incredible scholarship on LGBT history, and I have drawn extensively upon, rethought and synthesized it in my book. I’ve meditated not only on LGBT history but also, because it is inseparable, on all of American history. After two years of thinking and writing I suggest that there are two crucial concepts to consider when thinking about LGBT history in the United States.

The first is that the contributions of people whom we may now identify as lesbian, gay, bisexual or transgender are integral and central to how we conceptualize our national history. Without the work of social activists, thinkers, writers and artists such as We’wha, Walt Whitman, Emily Dickinson, Martha “Calamity Jane” Canary, Edith Guerrier, Countee Cullen, Ethel Waters, Bayard Rustin, Roy Cohn, Robert Mapplethorpe, Cherrie Moraga and Lily Tomlin we would not have the country that we have today. Women and men who experienced and expressed sexual desires for their own sex and those who did not conform to conventional gender expectations have always been present, both in the everyday and the imaginative life of our country. They have profoundly helped shape it, and it is inconceivable and ahistorical to conceptualize our traditions and history without them.

The second key, and slightly counterintuitive, concept is that LGBT history does not exist. By singling out LGBT people and their lives—what some people now call LGBT history—we are depriving them of their centrality in the broader sweep and breadth of American history. The impulse to focus on lives that have been shunned, marginalized, censored, ignored and hidden in the past, and in previous histories of the United States, has been revolutionary in the growth of a vibrant LGBT community. It is part of a larger social and political movement of Native-American, African-American, Latino/Latina and other marginalized identities and cultures to reclaim and celebrate our “lost” histories. (Although as an identity, LGBT has a much newer history than other identities.) But it is equally important to understand that this is a transitional moment in history that has emerged only in the past 40 years precisely because these groups were so deeply dismissed.

If LGBT history resides in the queer space of being both enormously vital while simultaneously not even existing, can we even write and speak about it? How do we explicate and uncover the past so that it brings new understandings to popular culture and scholarly pursuits alike? How will it resonate with our understanding of our own contemporary and historic lives?

Gertrude Stein, the mother of all queer wit, begins her novel The Making of Americans with the epigram, “Let me recite what history teaches. History teaches.” Stein’s recitation speaks to the intrinsic nature of my project. History teaches something new every time it is rewritten or interpreted. Pedagogy, like history, will never be able to contain all of America: a great country, an evil country, a place of tremendous generosity and welcome, as well as a place of pronounced disdain for foreigners and outsiders. America is not one thing or another. America is queer. To become American, to benefit from the contributions of LGBT people to this fabulous, horrible, scary and wonderful country we call “America” is to be a little queer. As history teaches, America only gets queerer.

Michael Bronski is a visiting lecturer in women’s and gender studies and Jewish studies. He was presented with the College’s Distinguished Lecturer Award in 2008. Adapted with permission from A Queer History of the United States (Beacon Press, 2011).