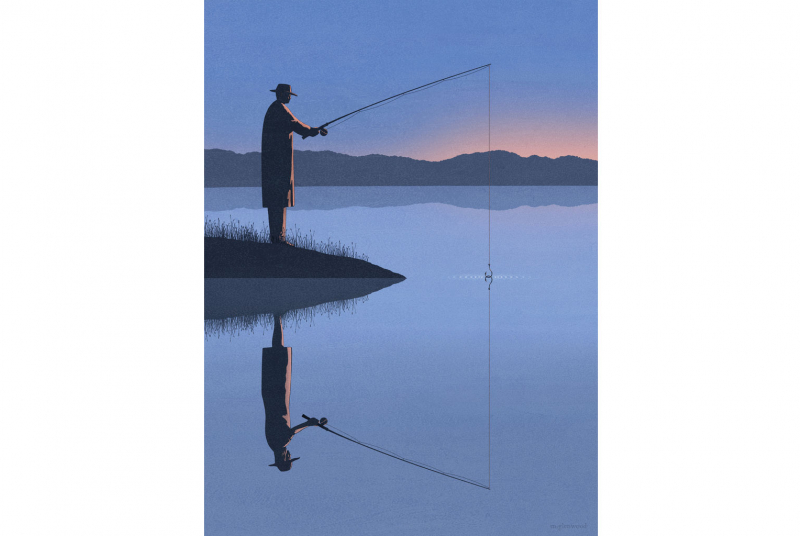 Tommy Butler ’92
Before you Go
(Harper)

Readers of Before You Go, Tommy Butler’s tricky, charming, often quite somber debut novel, will initially be under the impression that it’s a sort of high-concept metaphysical comedy along the lines of Good Omens and The Good Place, two recent TV hits about supernatural bureaucrats mucking about in the lives of ordinary folk.

In this case the angelic functionaries are Merriam and Jollis, who have been tasked with designing the prototype human “traveler” about to be sent to live on Earth. In a last-minute tweak of the design, Merry creates an empty space next to the human heart—a perhaps ill-advised innovation that dooms us all to lifetimes of dissatisfaction with our respective lots.

“They’ll feel it,” Jollis moans, “and they’re going to constantly be looking for things to fill it with. They’ll eat too much. They’ll fall in love with the wrong people. They’ll hoard money, and watch too much television, and buy useless crap from holiday catalogs, like potato scrubbing gloves or a spoonula.” (A spoonula? Never mind.)

Some of these dire forecasts—in particular the one about falling in love with the wrong people—come predictably true in the life of Butler’s significantly named protagonist, Elliot Chance. After a childhood of feeling misunderstood and insufficiently loved (and finding temporary solace in a vivid fantasy life that his parents and older brother fail utterly to appreciate), Elliot settles down to an even less satisfactory adulthood as an accountant in New York City during the dot-com boom.

At a suicide-prevention therapy group—yes, he has considered killing himself—Elliot meets Bannor, an older gentleman who claims to have visited the future and has foreseen his own suicide, and Sasha, a young ad copy writer and frustrated novelist who slips coded messages into ads and is desperately curious about what happens, if anything, when we die.

To explain how Butler’s cosmic story scaffolding is both more and less than it seems would constitute a string of spoilers. He uses various literary sleights of hand to draw his readers into a moving, decidedly realistic tale about one man’s search for the meaning of life and his dawning recognition that confusion and sadness are simply parts of the human experience.

That hole in our hearts turns out to be all too real, but in Before You Go, there’s more than we ever dreamed of to fill it with. —Kevin Nance

Lively and highly readable, this book explores how capitalism, particularly as practiced by the Fortune 500, is to blame for the current state of pernicious inequality, catastrophic climate change, and global instability. It details a road map to reshape the corporate landscape and rebuild the economy to generate prosperity without peril.

Laura (Zachman) Jamison ’97
All The Right Mistakes
(She Writes Press)

In her debut novel, attorney-turned-author Jamison crafts a heartwarming story about five college friends, just turned 40, who discover that one of them has written a tell-all book exposing the central life mistakes of each of the other four. The resulting drama sheds light on the complex nature of adult relationships, the definition of success, and happiness in a world filled with obstacles.

Leong explores why many modern poets turn to public documents as inspiration for their art. Drawing on works by poets such as Amiri Baraka and Claudia Rankine, the work explores not only the source documents but also each poet’s process of selection and curation.

Writer and cook Hunt follows up on Healthyish, her 2018 success, again providing recipes that are nourishing, delicious, and good for the gut. The former studio art major shows that eating tasty food that makes us feel good is not so hard after all.

Mark H. Smoller ’53 shares a lifetime of reflections and reminiscences—from the steamy summer streets of Brooklyn in the 1930s through a 40-year career as a dentist in New England—in the often whimsical Mark My Words (self-published).

University of California Irvine drama and African American studies professor Frank B. Wilderson III ’78 blends philosophy with autobiographical accounts to contemplate the Black experience through a lens of “perpetual slavery” in Afropessimism (Liveright).

Stuart Lucas ’81, founder and chief investment officer of Wealth Strategist Partners, decodes the complex world of investment and offers a toolkit for investors of any age in The Taxable Investor’s Manifesto: Wealth Management Strategies to Last a Lifetime (Wiley).

Jay “Israel” Rosenberg ’82, a guide at the Western Wall Tunnels in the Old City of Jerusalem, Israel, uses the biblical Book of Isaiah as a framework to understand the apocalypse and the coming of the Messiah in Isaiah: End Times and Messiah in Judaism (Gefen Publishing House).

Kate Hotchkiss ’84 follows a bride to her new home in a fishing village on Popplestone Isle in 1912 and the subsequent challenges that echo the hurdles faced by all residents of small islands in her debut novel, On Harbor’s Edge (self-published).

UMass Lowell English professor Jonathan Silverman ’87 hit the road to survey the fans of Johnny Cash and trace his rise to global icon as coauthor of Johnny Cash International: How and Why Fans Love the Man in Black (University of Iowa Press).

Harry Holt, Tu’91, an adjunct professor at Morgan State University, profiles 15 historically Black colleges and 33 alumni on their paths to success in You Can Get There from Here: A Historically Black College or University to Greatness (self-published).

Architect Quang Truong ’01 profiles 20 buildings and projects utilizing carbon fiber and fiber-reinforced polymers, as well as the potential structures they enable, in Composite Architecture: The Technology and Design of Carbon Fiber and FRPs (Birkhauser Architecture).

A.B. Wilkinson ’01, an assistant professor of history at the University of Nevada, Las Vegas, considers how people of mixed African, European, and Native American heritage were integral to the construction of racial ideologies in colonial America in Blurring the Lines of Race and Freedom: Mulattoes and Mixed Bloods in English Colonial America (University of North Carolina Press).

Marquette University Spanish professor Jeffrey K. Coleman ’08 examines theatrical production in Spain since the early 1990s, arguing that it reflects national anxieties about the non-European immigrant and the preservation of the status quo in The Necropolitical Theater: Race and Immigration on the Contemporary Spanish Stage (Northwestern University Press).

Zachary Dorner ’08, an historian at Johns Hopkins University, presents a history of economic and medical development across early America, Britain, and South Asia—and the close ties among medicine, finance, warfare, and slavery—in Merchants of Medicines: The Commerce and Coercion of Health in Britain’s Long Eighteenth Century (University of Chicago Press).

Tom Zoellner, Adv’11, offers a dramatic day-by-day account of the 1831 Christmas rebellion in Jamaica, profiling the enslaved men and women who rose up and triggered a decisive turn against slavery in Island of Fire: The Revolt That Ended Slavery in the British Empire (Harvard University Press).