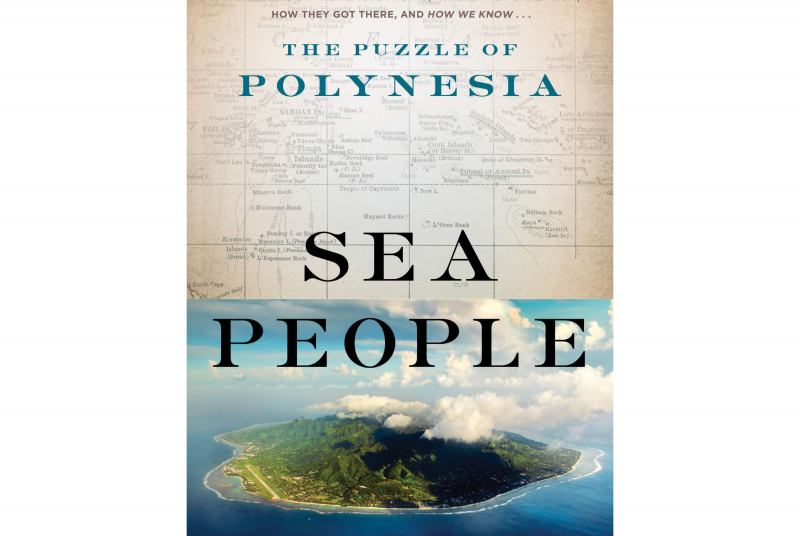 When the Western world first encountered Polynesia, half a millennium ago, a core mystery immediately jumped out. How did indigenous Polynesians—without writing, maps, metal tools, or modern navigation equipment such as a compass, sextant, or watch, let alone GPS—manage to occupy islands across the vast Pacific? How did they cross thousands of miles of open water to land at remote, isolated archipelagoes from Hawaii to New Zealand?

Thompson unravels the historical mystery in Sea People. Thompson, who lives in Boston and has written a memoir about her marriage to a Maori man (Come on Shore and We Will Kill and Eat You All, 2008), spent nearly 10 years taking deep dives into various fields, from archaeology to mythology to primitive navigation. She audited courses at Harvard. Today she knows more than most people about coral atoll formation and linguistics and rat DNA. “I love thinking about complex questions that are hard to answer,” she tells DAM, “and thinking about all the ways people have tried to answer those questions.”

Sea People exudes a familiarity with Polynesia because Thompson visited the islands. Repeatedly. “Understanding the landscape was a prerequisite,” she says. “It was partially visual, to see the islands from land, from the air, and from the sea—what was it like to be in a boat and first sight land—and partially to research in person. You have to get a firsthand feel.” Thompson, the editor of Harvard Review, has also lived in Hawaii and Australia.

Thompson sketches sympathetic but honest mini-portraits of the various explorers and scientists who came up with theories about Polynesian migration. She weighs the evidence they uncovered and the claims they made, pointing out the cultural assumptions behind them. She could have entirely dismissed certain people—adventurer Thor Heyerdahl and his Kon-Tiki expedition, for instance, or professor Andrew Sharp and his theory of accidental voyaging (the idea that the Polynesians had more or less drifted across the Pacific)—but instead she tells their stories while at the same time firmly shredding their arguments. “People make assumptions about every era,” she says. “It is easy now to scorn people from the colonial era, for example, but each generation has its own fascinating contributions, flaws and all.”

The mystery of Polynesian migration is not fully solved, however. Despite modern technology such as radiocarbon dating, there is still more to learn. “The story always is changing,” Thompson says. “Since the book came out, there have been more discussions about the sweet potato and how it got to Polynesia from its native South America.” —James Zug ’91

A leading Joyce scholar for four decades explains why he’s devoted so much of his life to Joyce’s Ulysses (1922). He intersperses personal tales of reading, studying, and teaching Joyce with in-depth analysis of the novel. His “autobloomography” comes in at more than 85,000 words, including a chapter-by-chapter summary of Ulysses.

Could Trump’s lack of accountability be the end of American democracy as we know it? Does the Ukraine scandal qualify as an impeachable offense? The celebrated U.S. Supreme Court lawyer and Georgetown professor lays out his case. “Anyone who reads this will come to the conclusion that what the president did is such a grave offense it is a structural crime against the American people,” says Katyal. Impeachment should be a last resort, he writes, but no one is above the law.

The “burst of energy” that makes you feel full of ideas and potential, free of constraints? That’s inspiration, as defined by consultant Holzer and her coauthors, whose interviews with business innovators provide insights and lessons for how to “find the spark” and inspire teams, leaders, and organizations.

Stella beer is a distinctly Egyptian brand that came to symbolize the seismic changes the country endured after the British occupation. Foda, grandson of the company’s CEO and a professor at Towson University, delivers an unusual case study of economic success—Egyptians were the first to manufacture beer—and cultural transformation, a brewing history that illuminates the evolving consumerism and epic, tumultuous transformation of a country through the last century.

John Kimmey ’44 follows Sgt. Tony DeFreest as he parachutes into German-occupied northern Italy and becomes involved in an OSS mission to force the surrender of Germany in his latest WW II thriller, Dante’s War (Pocol Press).

Arthur Bloom ’61, a former dean of visual and performing arts at the Kutztown University of Pennsylvania, details the life and work of the foremost American actor of the 19th century in Edwin Forrest: A Biography and Performance History (McFarland).

Edward Beal ’62, M.D., a clinical psychiatry professor at Georgetown University School of Medicine and former Army captain during the Vietnam War, draws on more than 5,000 interviews with returning soldiers to describe how they suffer physical and moral trauma as they fight in War Stories from the Forgotten Soldiers (Koehler Books).

Former clinical psychologist Steve Bank ’63 offers a retelling of Shakespeare’s tragedy that exposes Hamlet’s secrets and examines the darkest parts of his psyche in Hamlet: The Sequel (self-published).

Poet Richard Kenney ’70 explores love, science, and politics with the belief that what’s most serious might be best understood through irony in his latest collection, Terminator: Poems, 2008-2018 (Knopf).

Astrocartographer Wayne Moody ’73 focuses on the importance of the 35th latitude north in the first of a planned three-book series, War Impulse Pattern: Primer to Not on the Map—How to See America’s War Impulse Pattern (self-published).

Psychiatrist Amy Bloch ’83 draws on lessons learned from her daughter, Emily, who was born with severe brain damage, on how to live a more meaningful life in The Power of Heart: When and How to Get Out of Your Brain (St. Martin’s Essentials).

Colleen Farwell ’92, who resides in the Mohawk Nation in upstate New York with her six children, reflects on a mother’s love in the children’s picture book, I Will Carry You (iwillcarryyouchildrensbook.com).

Poet and editor Rena Mosteirin ’05 mixes experimental poetry and a critical theory of the poetics and politics of computer code (in this case, the source code of the Apollo 11) as coauthor, with Dartmouth professor and husband James Dobson, of Moonbit (Punctum Books).

Charly Ligety ’09 helps couples navigate some of life’s most significant discussions with a series of conversation prompts covering big topics such as family, money, and sex as coauthor of Let’s Do Us: Interactive Guidebooks for Taking Your Relationship to the Next Level (Harper Design).

Irnya Shuvalova, Adv’14, offers a bilingual collection of poems rooted in Ukraine’s folk culture, re-mixing its traditional spirituality with eroticism and awareness of the natural environment in Pray to the Empty Wells (Lost Horse Press).