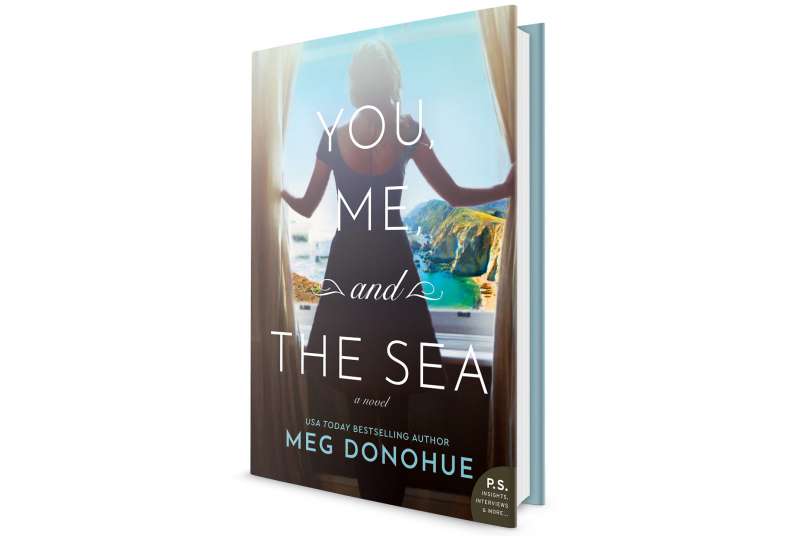 The heroine of Donohue’s compelling novel, You, Me, and the Sea, is named Merrow, which means “mermaid” in Irish-English. In Celtic folklore, these seafaring seducers enchant men—often to their doom. “I knew how far I was willing to go for love, how capable I was of blindly clinging to it,” she says.

Donohue’s tale of tortured love echoes Wuthering Heights, but with a twist. Emily Brontë’s classic has always been one of Donohue’s favorites, but she says the fates of star-crossed Heathcliff and Catherine leave her “vividly” disappointed. “I wanted to write the ending I wish I could have read and that I think a lot of readers wanted to see,” Donohue tells DAM.

In her neo-Gothic retelling, a manor on the moors becomes a farm on Horseshoe Cliff on northern California’s foggy coast in the 1990s. Merrow’s mother dies mysteriously, and after suffering Dickensian miseries, she finds true love—or at least thinks she has. You, Me, and the Sea’s tightly woven plot races tsunami-like through her characters’ lives with suspense and surprises.

With her fifth novel in seven years, Donohue has mastered the art of both tickling—and tugging—readers’ heartstrings. The author, who lives in San Francisco with her husband and three daughters, has a keen grasp on how people, especially women, relate to each other. “I’m very fond of being a writer that women embrace,” she says. Yet she is uneasy with being labeled a writer of women’s fiction. “That’s what others classify my work as being. There’s no men’s fiction. When you write stories about women’s lives there’s this implication they’re only going to be read by women,” she says. “I want to write fiction that is uplifting and entertaining, that brings readers joy and emotions, both happy and sad.” Is You, Me, and the Sea a “beach book,” a label some authors might shy from? “That is a complete compliment,” Donohue replies. —George M. Spencer

Read an excerpt from You, Me, and the Sea.

Robert Christgau ’62
Is It Still Good to Ya?
(Duke University Press)
Dozens of music icons including Etta James, Willie Nelson, Sinatra, Bowie, Fela Kuti, and Eminem get insightful appraisals in 87 essays from The Village Voice’s longtime music critic. He also offers his “Ten-Step Program for Growing Better Ears,” which originally appeared in DAM. (No. 10: “Spend a week listening to James Brown’s ‘Star Time.’ ”)

Denny Emerson ’63
Know Better to Do Better
(Trafalgar Square Books)
This “tool box for horse owners, riders, and trainers” offers insight from a world-class equestrian and Dartmouth athletic hall of fame member. Subtitled “Mistakes I Made with Horses (So You Don’t Have To),” the book offers advice on everything from horse selection and management to how they are affected by riders’ character traits.

Omar Khan ’80
Paper Jewels: Postcards from the Raj
(Mapin Publishing)
Lovers of all things Indian will relish this 350-page coffee table tribute to romantic Edwardian-era postcards that showcases more than 500 images of religious spectacles, palaces, maharajahs, and Himalayan vistas culled from 10,000 postcards amassed by the author through 30 years.

Cal Newport ’04
Digital Minimalism
(Penguin)
Ditch your phone. You’ll be happier. That’s the advice from a computer science professor who offers digital decluttering tips and tales of people who turned  off, tuned out, and dropped their blood pressure. Read an excerpt here.

Bruce Sloane ’57 draws on the journal he kept as he went through the years-long process of regaining near-normal hearing in a guide to the decision-making and adjustment processes in An Octogenarian’s Cochlear Implant Journey: I Can Hear Your Lovely Voice (self-published).

Retired financier and lifelong history buff Ward Burian ’58 analyzes the formation of each of the 50 states—from their first settlers to their ascendency to statehood—in The Creation of American States (Morgan James Publishing).

Considering the intricacies of everyday life, Geoff Moser ’60 plays with both poetry and prose in his latest book, Dream Meadow Poems (self-published).

Filmmaker Randall Blair ’68 provides tips and tricks on how to take a project from idea to the screen in The Producer’s Sourcebook (self-published). Blair has also released the final installment, Clark’s Choice, in his coming-of-age trilogy, “The Education of Clark Westfield” (self-published).

Lifelong adventure seeker Peter Heller ’82 tells the story of two young men on a canoe trip in northern Canada that becomes a battle for survival in The River: A Novel (Knopf). Read an excerpt here.

Annie Daher ’07, a staff attorney at University of California Hastings College of the Law Center for Gender and Refugee Studies, evaluates legal developments in refugee law as coauthor of the fifth edition of Refugee Law and Policy: A Comparative and International Approach (Carolina Academic Press).