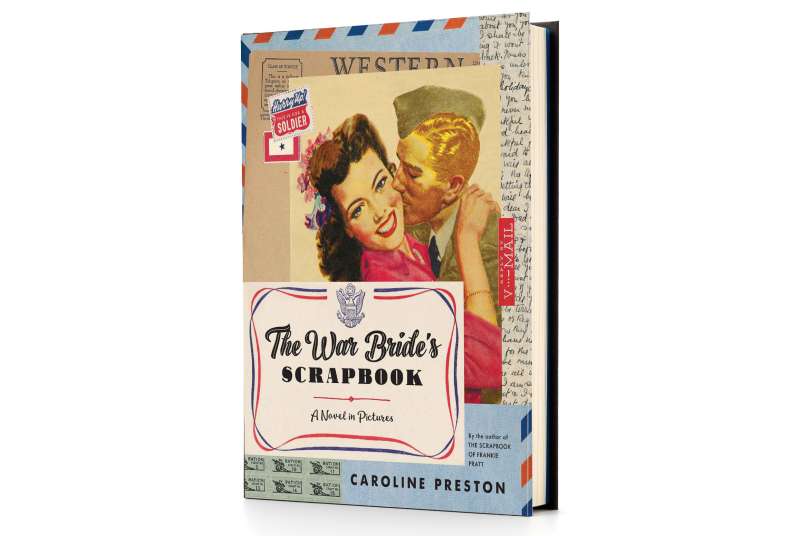 Caroline Preston ’75
The War Bride’s Scrapbook: A Novel in Pictures
(Ecco)
Hollywood’s WW II love stories typically end in tragedy or a happy reunion. But in reality? “It’s much more nuanced,” says Preston. Her graphic novel tells a wartime love tale that keeps readers guessing with plenty of twists and turns. Its narrative unfolds in a colorful scrapbook kept by Lila Jerome, the bride of dashing Army engineer Perry Weld, who is off fighting in Europe.

On each page, snippets of the narrator’s diary-style commentary appear with photos of 1940s ephemera such as magazine ads, travel postcards, stamps, war bonds, fabric swatches, uniform patches, and military stationery. Preston, a retired archivist, found some items, such as a 1946 Chevy owner’s manual, online. “You can find anything on eBay,” she tells DAM.

Without resorting to any digital wizardry such as Photoshopping images, she artfully assembled each page’s cut-outs by hand, scanned them, and sent them to the printer. She includes postcards that G.I.s sent home from newly liberated Paris and a mass-produced map that listeners to FDR’s Fireside talks used to pin-point his descriptions of the ebb and flow of battles. “I have a real appreciation for stories contained in old things,” says Preston, who admits to being a lifelong collector of historical ephemera.

The inspiration for War Bride came from Preston’s aunt, a Vassar dropout who wed a boyfriend she hardly knew just before the war began. They later divorced. To research her book, Preston attended war reenactments and visited Normandy beaches and a Charlottesville, Virginia, history buff who had transformed his basement into a home-front museum. She also scoured Ladies’ Home Journal and other wartime women’s magazines for fashion tips and advice columns that told readers how to be “good” wives while their husbands were away at war. Not surprisingly, Preston has amassed a collection of WW II scrapbooks. After the war, many women stuffed them into attics and forgot about them. “They’re a really interesting study of what was happening on the home front and in women’s lives,” she says.   —Betsy Vereckey

Charles B. Schudson ’72
Independence Corrupted: How America’s Judges Make Their Decisions
(University of Wisconsin Press)
A former appellate judge takes readers behind the bench to probe the judicial minds that oversee trials and sentencings. Their stories reveal the pressures that threaten judicial ethics and the reforms needed to protect judicial independence.

Richard A. Conn Jr. ’79
The Earthbound Parent: How (and Why) to Raise Your Little Angels Without Religion
(Pitchstone)
Conn, a father of four, gives advice on how to raise children without any religious beliefs to prevent religious violence. “A child’s innocent belief in Santa Claus will not result in the killing of people, but an adult’s extremist belief in a god or gods can,” he explains.

Eric Dezenhall ’84
Best of Enemies: The Last Great Spy Story of the Cold War
(Twelve)
In this true story of the improbable friendship between a CIA case officer and a KGB double agent, crisis consultant Dezenhall and coauthor Gus Russo detail how two espionage cowboys worked together to unearth a Soviet mole.

Daniel J. McCarthy ’54, a global management professor at Northeastern and cofounder of its high-tech M.B.A. program, examines the significant contributions of technical professionals from the former Soviet Union to the U.S. innovation economy as coauthor of Hammer & Silicon: The Soviet Diaspora in the U.S. Innovation Economy (Cambridge University Press).

John White ’61, a former director of education at the Institute of Noetic Sciences, argues that literary greatness can be determined by the degree to which people experience self-transcendence through a novel, play, or film in Liberation Literature and Higher Human Development: From Poetics to Noetics—A Transpersonal Approach to Literary Studies (CreateSpace).

David Bennett Laing ’62 chronicles growing up as the son of a Dartmouth professor father and poet mother, studying geology at the College, and pursuing a range of professions in his autobiography, The Dartmouth Man: A Charmed Life (Amazon Digital).

James Lenfestey ’66, chair of the Minneapolis-based Literary Witnesses poetry series since 2003, offers a tribute to parenthood and the intimacies of an enduring relationship in A Marriage Book: 50 Years of Poems from a Marriage (Milkweed Editions).

Andy Hubbard ’72 offers a life of observations, from cute squirrels that pull at heartstrings to an appreciation for each step he takes in his backyard in rural Indiana, in his third book of poetry, Meeting the Moon Halfway (Reddashboard Press).

Matthew Dickerson ’85 shares lessons of stream ecology and the history of human habitation in this tale of waterways in Appalachia, Vermont, and Maine in A Tale of Three Rivers: Of Wooly Buggers, Bowling Balls, Cigarette Butts, and the Future of Appalachian Brook Trout (Wings Press).

English professor Emily Hodgson Anderson ’98 considers how theatergoers experience the ephemeral nature of performance and why they gravitate toward art—and artists—they know will disappear in Shakespeare and the Legacy of Loss (University of Michigan Press).

Counselor Alison Cook ’95 draws on clinical psychology and spiritual practice to guide readers from doubt to confidence as coauthor of Boundaries for Your Soul: How to Turn Your Overwhelming Thoughts and Feelings into Your Greatest Allies (Thomas Nelson).

Erika Meitner ’96, the director of creative writing programs at Virginia Tech, plumbs human resilience and grit in the face of disaster, loss, and uncertainty in her fifth book of poems, Holy Moly Carry Me (BOA Editions).

Karen Stern ’97, an associate professor at Brooklyn College of the City University of New York, draws on almost a decade of research in burial caves to examine how graffiti can be used to reconstruct the lives of people in the ancient world in Writing on the Wall: Graffiti and the Forgotten Jews of Antiquity (Princeton University Press).

Garry Harper ’10 casts a burning light on the absurdities of 21st century society—where a bad batch of moonshine can transform someone into a cult leader—in his debut novel, St. Anthony’s Fire (self-published).