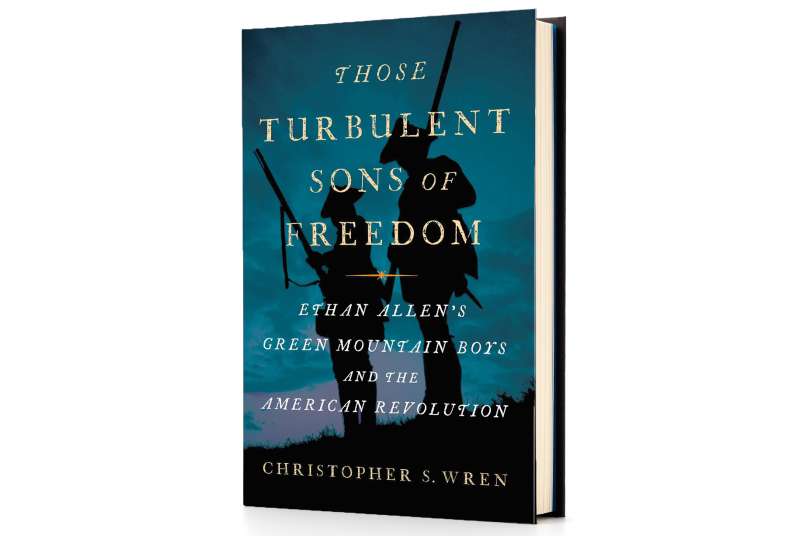 Christopher S. Wren ’57
Those Turbulent Sons of Freedom: Ethan Allen’s Green Mountain Boys and the American Revolution
(Simon & Schuster)
Wren frames his fast-paced history of the Revolutionary War in Vermont and New Hampshire around Ethan Allen and other colonial leaders, but the book’s heroes are ordinary Americans. “I wanted to tell how hard it was to fight in that war,” Wren tells DAM. “We have this vision of parades and drums and waving flags. No—this was gutter warfare.”

To write about war and suffering, it helps to have experienced both. Wren won renown as a New York Times foreign correspondent. Before that, he served as an Army infantry platoon leader in South Korea. “I’ve been miserable and hungry enough to put myself in the boots of colonial soldiers—even though they were often barefoot,” says Wren. He writes of starving militia men stewing “a phantom broth” from leather cartridge boxes and devouring a pet Newfoundland dog, “paws and all.” He tells of teenage soldier Ebenezer Fletcher, who, wounded in battle and abused by his British captors, fled to the woods wearing a dead man’s boots. And he recounts the grisly fate of Vermonter Jane McCrea. On the way to visit her Redcoat fiancé, she was accidentally shot by a Continental soldier as she was being abducted by Indians, who then scalped her “lustrous hair.”

Wren wrestles with Allen’s confounding behavior. A 1760s vigilante, he fought New York’s illegal land grab in New Hampshire. Along with Benedict Arnold, he seized strategic Fort Ticonderoga. Afterward, while the diligent Arnold inventoried captured war materiel, Allen binged on rum. Soon thereafter, the British took him prisoner and held him for 32 grueling months. On his release, Allen toured POW camps and denounced their despicable conditions. “He was like John McCain—he stood up to his captors,” Wren says. Later Allen secretly sought a separate peace with England, infuriating Washington. “We like to think of Allen as a great hero, but he was a flawed man who helped save the American revolution,” says Wren. “And he didn’t like New Yorkers.” (Click here to read an excerpt)  —George M. Spencer

Fredric Price ’67
My Mother’s Son
(Fig Tree Books)
Writing as David Hirshberg, Price delivers a beguiling coming-of-age novel that plays out against the backdrop of the Korean War, the Holocaust’s aftermath and a vibrant postwar Boston neighborhood.

Lillian Guerra ’92
Heroes, Martyrs, and Political Messiahs in Revolutionary Cuba, 1946-1958
(Yale University Press)
In what’s been called “the best political history of Cuba’s 1946-1958 period,” this University of Florida historian draws from newly opened Cuban archives to construct a vivid history of the underground movement that led to Castro’s Communist takeover.

Brad Parks ’96
Closer Than You Know
(Dutton)
Hardboiled writer Parks, winner of crime fiction’s Lefty, Nero and Shamus Awards, delivers a grim and gripping dose of tension in this domestic thriller about a young mom raised in foster care battling to find her baby, who’s been mysteriously seized by social services.

Former film writer and director Norman Weissman ’46 follows three characters returning from war who end up fighting crime in their community and sexism in the military in his fifth novel, The Patriot (Hammonasset House).

Stanford Business School economist David Kreps ’72 reveals how high-performing executives and M.B.A. students respond to motivators and gives advice on getting employees to do their best inThe Motivation Toolkit: How to Align Your Employees’ Interests with Your Own (W.W. Norton).

Former speechwriter and political campaign manager C. Richard Allen ’75 curates a collection of Robert Kennedy’s famous speeches—along with commentary from historians and public figures—in an updated edition of RFK: His Words for Our Times (William Morrow), published on the 50th anniversary of his assassination.

The Rev. Dennis Billy ’75, a Catholic theology professor at the Graduate Theological Foundation, provides spiritual guidance to men having a difficult time making sense of their place in their families and societies in Going Beyond the Wound: A Spirituality for Men (New City Press).

Marc Feldman ’80, DMS’84, M.D., who has worked extensively with patients who have Munchausen syndrome or factitious disorders, chronicles people’s motivations to fabricate or induce illness or injury to satisfy deep emotional needsas coauthor of Dying to be Ill: True Stories of Medical Deception (Routledge).

Holy Cross Russian literature professor Amy Singleton Adams ’86 brings together a collection of essays by leading scholars to consider the impact of the Virgin Mary from seventeenth century Russia to the post-Soviet era in Framing Mary: The Mother of God in Modern, Revolutionary, and Post-Soviet Russian Culture (Northern Illinois University Press).

Karin Rosemblatt ’86, a history professor at the University of Maryland, examines race and policies toward indigenous peoples in The Science and Politics of Race in Mexico and the United States, 1910–1950 (University of North Carolina Press).

Geoff Tuff ’93, who leads the innovation and applied design practices at accounting giant Deloitte, outlines how managers can identify wasteful habits and develop new approaches to challenges as coauthor of Detonate: Why—and How—Corporations Must Blow Up Best Practices (and Bring a Beginner’s Mind) to Survive (Wiley).

Ani Kokobobo ’05, a professor and director of graduate studies in Slavic languages and literatures at the University of Kansas, argues the social instability in 19th-century Russia prompted writers to develop the “grotesque realism” style, which focuses on materialism rather than noble values, in Russian Grotesque Realism: The Great Reforms and the Gentry Decline (Ohio State University Press).