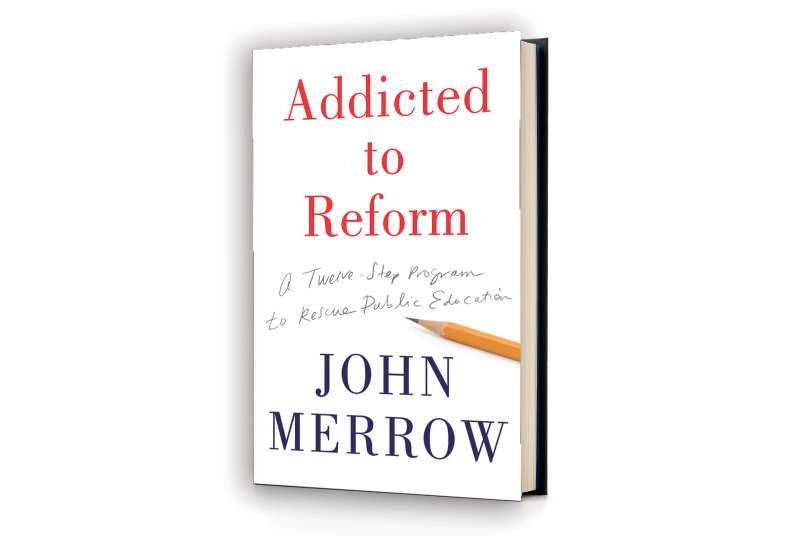 John Merrow ’63
Addicted to Reform: A Twelve-Step Program to Rescue Public Education
(New Press)
Merrow, a former high school teacher, college professor, instructor in a federal penitentiary and award-winning PBS education correspondent, knows a thing or two about teaching and American education. He plumbs that experience for his fifth book, in which the former English major argues that America has an addiction to school reform and offers a plan to kick the habit to revive the nation’s K-12 school system. He pulls no punches. “Our deceptive approach is causing permanent damage to probably millions of children,” he says. His book has many examples of what he calls “faux reforms” that appear to change things but fail to get at underlying conditions. He points to Obama-era efforts to raise high school graduation rates by lowering standards, “counseling” students to leave school for a GED program without ensuring they sign up, and changing grades, resulting in adults cheating on key standardized tests. “Voila, the graduation rate went up,” says Merrow. “Now, a phony diploma doesn’t actually kill anyone, but multiply that by millions and we may be killing our democracy. We need an educated populace to sustain our economy and social fabric.”

He lays out his suggested “treatment” in 12 chapters, one for each of his suggested steps to reform, including “Measure What Matters” and “Embrace Technology (Carefully).” The author insists that no single step is more important than any other. “What I believe matters more is the sequence,” he says. “We have to begin by acknowledging the addiction and appreciating the costs of this approach. The paradigm shift is asking a different question about every child. Not ‘How smart is she?’ but instead, ‘How is she smart?’ ” Full of stories from Merrow’s lengthy career, Addicted to Reform has been described by reviewers as “a wise set of lessons” with “a sharp edge of seasoned insight and delectable irreverence” that confirms Merrow’s standing as one of our most astute observers of American education. (Click here to read an excerpt.) —Sean Plottner

A. Roger Ekirch ’72
American Sanctuary: Mutiny, Martyrdom, and National Identity in the Age of Revolution
(Pantheon)
Ekirch’s latest book opens with the bloodiest mutiny suffered by the Royal Navy—on the British frigate Hermione in 1797, only a few years after the Revolutionary War. The Virginia Tech history professor lays out how the ensuing firestorm led to America’s decision to grant political asylum to refugees from foreign governments.

Louise Erdrich ’76
Future Home of the Living God
(Harper)
National Book Award-winning author Erdrich paints a startling portrait of a young woman fighting for her life and her unborn child against oppressive forces that manifest in the wake of a cataclysmic event. It’s a breakout work, according to Booklist, “with a bold apocalyptic theme, searing social critique and high-adrenaline action.”

Anne Quirk ’77
The Good Fight: The Feuds of the Founding Fathers (and How They Shaped the Nation)
(Knopf)
The former publisher of Horn Book Magazine, Quirk offers a unique look at how the Founding Fathers settled their differences—George Washington vs. King George, Benjamin Franklin vs. his son, William—in their quest to settle a nation.

Matthew Lansburgh ’88
Outside Is the Ocean
(University of Iowa Press)
Lansburgh earned the 2017 Iowa Short Fiction Award for his collection of linked stories that follow a young woman who grew up in Germany during World War II as she crosses the Atlantic to start a new life. “Lansburgh has a keen eye and ear, and he puts them to great use in this lovely and mesmerizing” collection, writes one reviewer.

Giano Cromley ’95
What We Build Upon the Ruins
(Tortoise Books)
Cromley weaves together powerful stories about love and loss and longing in his second book. He focuses on feeble human institutions and fragile relationships with a collection that “makes you feel the depths of your own humanity,” according to Dartmouth English professor Ernest Hebert.

Robert M. Oneal ’54, DMS’55, a plastic surgery clinical professor at the University of Michigan at Ann Arbor, sifts through a wealth of personal experiences and primary sources in an exploration of the field of plastic surgery, as it existed in Ann Arbor and at the University of Michigan for four decades, as coauthor of Leaders in Plastic Surgery: The Dingman-Grabb Era, 1946-1986 (Maize Books/Michigan Publishing).

Brooks Clark ’78 profiles Sally Smith, who was the developer of a learning system for children with learning disabilities and an American University education professor, in Sally’s Genius: The Life of Sally L. Smith, the Birth of the Lab Schools of Washington and Baltimore, and the Magic of the American Club Methodology (Lulu).

Mary Elizabeth Basile Chopas ’89, a former adjunct professor of law at the University of North Carolina at Chapel Hill, traces how U.S. government and military leaders constructed wartime policies that affected Italian residents during the Second World War in Searching for Subversives: The Story of Italian Internment in Wartime America (University of North Carolina Press).

Georgetown University psychology professor Abigail Marsh ’99 delves into the universal emotion of fear—and how people’s responses to others’ fear differentiates those with psychopathic tendencies from those with extremely altruistic behavior—in The Fear Factor: How One Emotion Connects Altruists, Psychopaths, & Everyone In-Between (Basic Books). (See a profile on her work in the November-December 2017 issue of DAM.)

Christopher Rea ’99, an associate professor of modern Chinese literature at the University of British Columbia, has helped translate Zhang Yingyu’s The Book of Swindles: Selections from a Late Ming Collection (Columbia University Press), a 17th-century collection of stories from the late Ming Dynasty in China that provides insights into—and tips on avoiding—the deceits and cons prevalent in that period.

Middlebury political science professor Sarah Stroup ’00 uses case studies to illuminate how international nongovernmental organizations (INGOs) are received by peers, policymakers and business and to argue that the more authority an INGO has, the more constrained it becomes as coauthor of The Authority Trap: Strategic Choices of International NGOs (Cornell University Press).