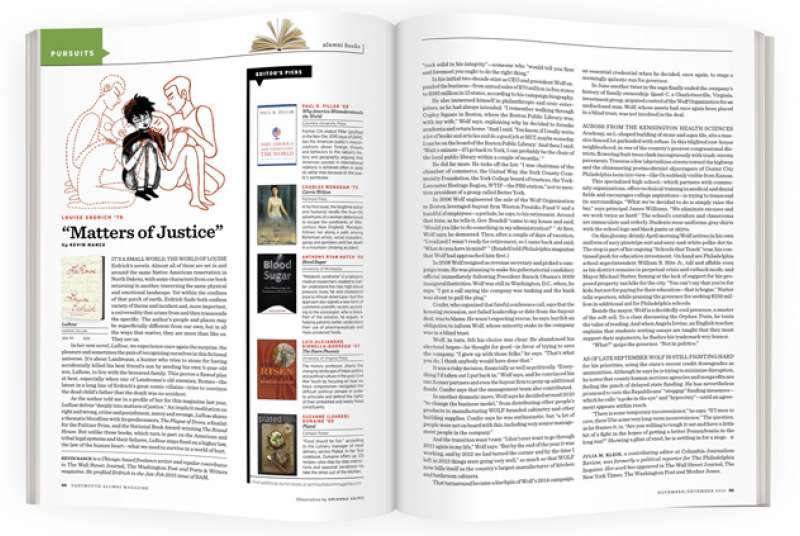 Louise Erdrich ’76
LaRose
(Harper Collins)
It’s a small world, the world of Louise Erdrich’s novels. Almost all of them are set in and around the same Native American reservation in North Dakota, with some characters from one book returning in another, traversing the same physical and emotional landscape. Yet within the confines of that patch of earth, Erdrich finds both endless variety of theme and incident and, more important, a universality that arises from and then transcends the specific. The author’s people and places may be superficially different from our own, but in all the ways that matter, they are more than like us. They are us.

In her new novel, LaRose, we experience once again the surprise, the pleasure and sometimes the pain of recognizing ourselves in this fictional universe. It’s about Landreaux, a hunter who tries to atone for having accidentally killed his best friend’s son by sending his own 5-year-old son, LaRose, to live with the bereaved family. This proves a flawed plan at best, especially when one of Landreaux’s old enemies, Romeo—the latest in a long line of Erdrich’s great comic villains—tries to convince the dead child’s father that the death was no accident.

As the author told me in a profile of her for this magazine last year, LaRose delves “deeply into matters of justice.” An implicit meditation on right and wrong, crime and punishment, mercy and revenge, LaRose shares a thematic bloodline with its predecessors, The Plague of Doves, a finalist for the Pulitzer Prize, and the National Book Award-winning The Round House. But unlike those books, which turn in part on the American and tribal legal systems and their failures, LaRose stays fixed on a higher law, the law of the human heart—what we need to survive in a world of hurt.     —Kevin Nance

Paul R. Pillar ’69
Why America Misunderstands the World
(Columbia University Press)
Former CIA analyst Pillar (profiled in the Nov-Dec 2010 issue of DAM), ties the American public’s misconceptions about foreign threats and behaviors to the nation’s history and geography, arguing that American success in international relations is achieved often in spite of, rather than because of, the public’s worldview.

Charles Monagan ’72
Carrie Welton
(Penmore Press)
In his first novel, the longtime editor and humorist recalls the true-life adventures of a woman determined to escape the constraints of 19th-century New England. Monagan follows her along a path among Bohemian artists, social crusaders, gangs and gamblers until her death in a mountain climbing accident.

Anthony Ryan Hatch ’98
Blood Sugar
(University of Minnesota)
“Metabolic syndrome” is a category medical researchers created to better understand the risks high blood pressure, body fat and cholesterol pose to African Americans—but this approach also signals a new form of colorblind scientific racism, according to the sociologist, who is black. Part of the solution, he argues, is helping patients better understand their use of pharmaceuticals and mass-produced foods.

Luis-Alejandro Dinnella-Borrego ’07
The Risen Phoenix
(University of Virginia Press)
The history professor charts the changing landscape of black politics and political culture in the post-Civil War South by focusing on how six black congressmen navigated the difficult political climate in order to articulate and defend the rights of their embattled and newly freed constituents.

Suzanne (Lehrer) Dumaine ’09
Plated
(Clarkson Potter)
“Food should be fun,” according to the culinary manager of meal delivery service Plated. In her first cookbook, Dumaine offers up 125 recipes—plus step-by-step instructions and seasonal variations—to take the stress out of the kitchen.

Peter Schaub ’44 shares anecdotes and details from his career in the toll-bridge industry–including as president of the Lewiston, New York, toll bridge before its sale to the Niagara Falls Bridge Commission—in Wanna Buy a Bridge? (No, Not the Brooklyn Bridge) (self-published).

Doug Zipes ’61, M.D., follows three generations of Olympic athletes across eight decades, culminating in intrigue and danger at the 2016 Summer Olympic Games in Brazil in his third novel, Not Just a Game (iUniverse).

Howard Reiss ’73 brings together four troubled adults on the tip of Cape Cod through the magic of music in his fourth novel, P Town (Krance Publishing).

Kara Finnigan ’90, an associate professor of education policy at the University of Rochester Warner School of Education, considers various approaches and solutions to the challenges of improving school districts as co-editor of Thinking and Acting Systemically: Improving School Districts Under Pressure (American Educational Research Association).

Andrew David Field ’91, associate dean at the Shanghai campus of the Hult International Business School, examines the cosmopolitan nightlife culture that first arose in that city in the 1920s and that has been experiencing a revival since the 1980s in Shanghai Nightscapes: A Nocturnal Biography of a Global City (University of Chicago Press).

Rob Kornblum ’91 offers a how-to guide to anyone considering starting a business after a few decades of corporate experience in Never Too Late to Startup: How Mid-life Entrepreneurs Create Wealth, Freedom & Purpose (Lioncrest Publishing).

Valerie Worthington ’92 shares her real-life adventures during a road trip she took to train in Brazilian jiu-jitsu, the martial art she had practiced since 1998, in Training Wheels: How a Brazilian Jiu-Jitsu Road Trip Jumpstarted My Search for a Fulfilling Life (Artechoke Media).

Tony Perry ’99 shares how he came to terms with losing an unborn child to an abortion he didn’t want and reveals how abortion isn’t just a women’s issue but one that can also affect men in unexpected ways in A Father’s Choice: A Memoir of Love, Loss, and Hope (Amazon).