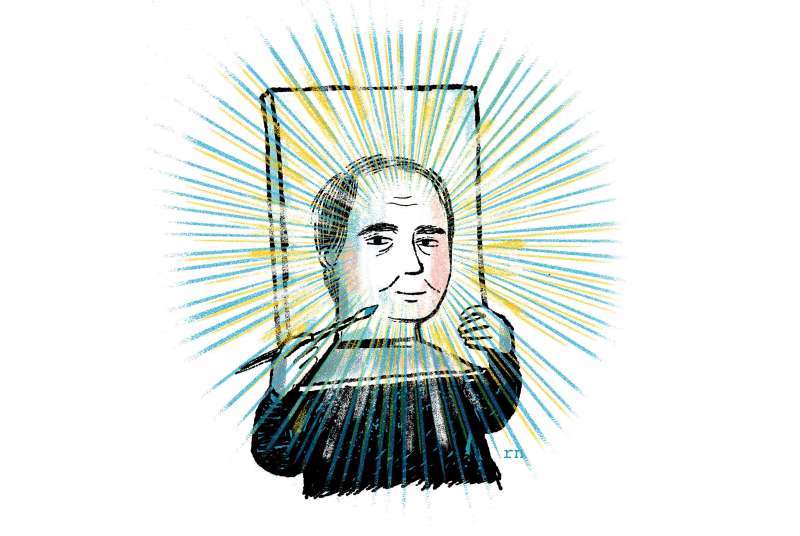 From his Thetford, Vermont, studio Stephens painted “dreamlike juxtapositions concealing deeper levels of philosophical and religious symbolism,” according to one reviewer. The artist’s psychedelic worlds are characterized by intricate detail and fantastical creatures and landscapes, a style he first encountered during a Dartmouth art history class that exposed him to the Book of Kells, a 9th-century illuminated manuscript. “It was like a biological system pulsating with life,” he says. “I felt as if I’d been catapulted into another reality.”

It took years for Stephens to become comfortable in that alternate universe. He majored in studio art and minored in art history, a “disastrous” combination, he says. “One learns technique from the former and from the latter that everything one attempts has been done more eloquently by previous masters.” He knew his work “wasn’t going to set the contemporary art scene on fire, but at least I felt it was uniquely mine, and that made all the difference,” he says. He has exhibited his paintings at the Jaffe-Friede Gallery in Dartmouth’s Hopkins Center, the Southwest Art Gallery in Dallas, and the Delaware Art Museum in Wilmington. [View a slideshow of his work here.]

Stephens now uses Photoshop’s editing software to lay out an image, consider colors, and test different versions of a painting before deciding what works best. He likens the process to Darwin’s theory of natural selection: “One version will ‘survive’ to be the right one for the right surroundings,” he says.

Stephens has also taught art, first as a volunteer at the Vermont State Penitentiary and then at Hanover High School until 1977. As advancing Parkinson’s disease is beginning to limit his abilities, he remains optimistic: “Maybe that’s a good thing. It’s a snare and a delusion to be so wrapped up in identity that one can only live by a label—painter, teacher. I think we’re all larger than that.”