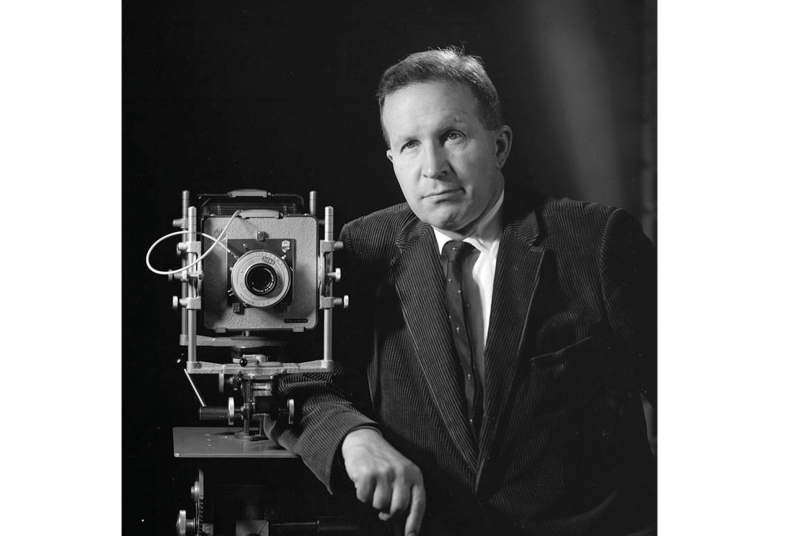 He understood the art in waiting. A lifelong hunter and fisherman, Adrian Bouchard, the esteemed and beloved Dartmouth photographer, knew the value of being in the right place at the right moment. He would lug his heavy camera equipment around the campus or up Mount Washington, then set up and watch for the light to fall perfectly on his subject. “You wait for what you are waiting for,” says his daughter, Lisa Lacasse, also a photographer, describing a lesson learned from her father. “You don’t waste your shot.”

As the College’s official photographer from 1939 to 1976, “Bouch,” as he was known, captured more than 10,000 images of campus, students, and the Dartmouth community, many of the photographs defining a vision of the school as both rugged and graceful. They remain Dartmouth classics. “Adrian was branding before anyone knew what branding was,” says Nancy Wasserman ’77, who worked with him as a student assistant.

That combination of strength and grace also defined the man. Bouch grew up in a French-speaking community in northern New Hampshire and hardly knew English until he entered the public high school. He was working in a paper mill and serving as a hunting guide when the founder of Dartmouth’s ski school recruited him to teach skiing. According to his daughter, an alum gave Bouch a Brownie camera at about the time the College was looking for someone to take pictures of students. A job and an artist were born.

With his equipment and his corncob pipe, he became a fixture around campus, except for the three-and-a-half years he spent with the Army in the Pacific during World War II. He spoke little about his art—“It was just the magic of the morning,” he once told his daughter—but he honed an eye for composition. “He’d case something out, so he’d know where to be,” recalls Wasserman. “He could get spontaneous shots as well, but his classic shots are with great framing using the buildings, using the trees, whatever.”

Through the years he gained a huge circle of friends, from students to campus workers to professors to President John Sloan Dickey, class of 1929, who accompanied him often on hunting and fishing trips. “He could talk to anyone about anything,” says Lacasse. “There was no social class.” The later years of his era encompassed enormous changes in the country and the school, but he tuned his subjects to reflect the increasing diversity of the student body and the admission of women. “Change is good, change is wonderful, you’ll learn something from it,” Lacasse recalls her father saying.

Bouch died in 1983 at 72, but his legacy is literally undying: a trove of period images of Dartmouth that are timeless in their beauty—and lasting reminders of the value of waiting for the moment.

Bouchard found filtered sunlight behind Rollins Chapel to create this sublime scene in the 1950s.

The quiet calm before a game at Memorial Field

Roger Brown ’45 takes a breather during a freshman trip.

For more than 40 years Bouchard cast his eye across the campus to capture the essence of Dartmouth. Pictured here: the 1939 baccalaureate at Rollins Chapel

A climber ascends Bartlett Tower in 1946.

Paddlers on the Connecticut in the 1950s

Richard Babcock is a novelist and the former editor of Chicago magazine.