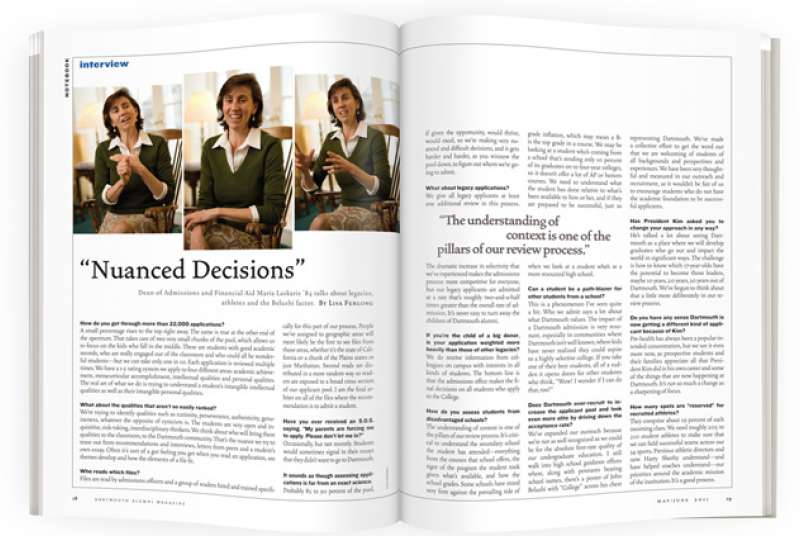 How do you get through more than 22,000 applications?

A small percentage rises to the top right away. The same is true at the other end of the spectrum. That takes care of two very small chunks of the pool, which allows us to focus on the kids who fall in the middle. These are students with good academic records, who are really engaged out of the classroom and who could all be wonderful students—but we can take only one in 10. Each application is reviewed multiple times. We have a 1-5 rating system we apply to four different areas: academic achievement, extracurricular accomplishment, intellectual qualities and personal qualities. The real art of what we do is trying to understand a student’s intangible intellectual qualities as well as their intangible personal qualities.

What about the qualities that aren’t so easily ranked?

We’re trying to identify qualities such as curiosity, perseverance, authenticity, genuineness, whatever the opposite of cynicism is. The students are very open and inquisitive, risk-taking, interdisciplinary thinkers. We think about who will bring these qualities to the classroom, to the Dartmouth community. That’s the nuance we try to tease out from recommendations and interviews, letters from peers and a student’s own essay. Often it’s sort of a gut feeling you get when you read an application, see themes develop and how the elements of a file fit.

Who reads which files?

Files are read by admissions officers and a group of readers hired and trained specifically for this part of our process. People we’ve assigned to geographic areas will most likely be the first to see files from those areas, whether it’s the state of California or a chunk of the Plains states or just Manhattan. Second reads are distributed in a more random way so readers are exposed to a broad cross section of our applicant pool. I am the final arbiter on all of the files where the recommendation is to admit a student.

Have you ever received an S.O.S. saying, “My parents are forcing me to apply. Please don’t let me in?”

Occasionally, but not recently. Students would sometimes signal in their essays that they didn’t want to go to Dartmouth.

It sounds as though assessing applications is far from an exact science.

Probably 85 to 90 percent of the pool, if given the opportunity, would thrive, would excel, so we’re making very nuanced and difficult decisions, and it gets harder and harder, as you winnow the pool down, to figure out whom we’re going to admit.

What about legacy applications?

We give all legacy applicants at least one additional review in this process. The dramatic increase in selectivity that we’ve experienced makes the admissions process more competitive for everyone, but our legacy applicants are admitted at a rate that’s roughly two-and-a-half times greater than the overall rate of admission. It’s never easy to turn away the children of Dartmouth alumni.

If you’re the child of a big donor, is your application weighted more heavily than those of other legacies?

We do receive information from colleagues on campus with interests in all kinds of students. The bottom line is that the admissions office makes the final decisions on all students who apply to the College.

How do you assess students from disadvantaged schools?

The understanding of context is one of the pillars of our review process. It’s critical to understand the secondary school the student has attended—everything from the courses that school offers, the rigor of the program the student took given what’s available, and how the school grades. Some schools have stood very firm against the prevailing tide of grade inflation, which may mean a B- is the top grade in a course. We may be looking at a student who’s coming from a school that’s sending only 10 percent of its graduates on to four-year colleges, so it doesn’t offer a lot of AP or honors courses. We need to understand what the student has done relative to what’s been available to him or her, and if they are prepared to be successful, just as when we look at a student who’s at a more resourced high school.

Can a student be a path-blazer for other students from a school?

This is a phenomenon I’ve seen quite a bit. Who we admit says a lot about what Dartmouth values. The impact of a Dartmouth admission is very resonant, especially in communities where Dartmouth isn’t well known, where kids have never realized they could aspire
to a highly selective college. If you take one of their best students, all of a sudden it opens doors for other students who think, “Wow! I wonder if I can do that, too?”

Does Dartmouth over-recruit to increase the applicant pool and look even more elite by driving down the acceptance rate?

We’ve expanded our outreach because we’re not as well recognized as we could be for the absolute first-rate quality of our undergraduate education. I still walk into high school guidance offices where, along with pennants bearing school names, there’s a poster of John Belushi with “College” across his chest representing Dartmouth. We’ve made a collective effort to get the word out that we are welcoming of students of all backgrounds and perspectives and experiences. We have been very thoughtful and measured in our outreach and recruitment, as it wouldn’t be fair of us to encourage students who do not have the academic foundation to be successful applicants.

Has President Kim asked you to change your approach in any way?

He’s talked a lot about seeing Dartmouth as a place where we will develop graduates who go out and impact the world in significant ways. The challenge is how to know which 17-year-olds have the potential to become those leaders, maybe 10 years, 20 years, 30 years out of Dartmouth. We’ve begun to think about that a little more deliberately in our review process.

Do you have any sense Dartmouth is now getting a different kind of applicant because of Kim?

Pre-health has always been a popular intended concentration, but we see it even more now, as prospective students and their families appreciate all that President Kim did in his own career and some of the things that are now happening at Dartmouth. It’s not so much a change as a sharpening of focus.

How many spots are “reserved” for recruited athletes?

They comprise about 19 percent of each incoming class. We need roughly 205 to 210 student athletes to make sure that we can field successful teams across our 34 sports. Previous athletic directors and now Harry Sheehy understand—and have helped coaches understand—our priorities around the academic mission of the institution. It’s a good process.

How are recruited-athlete applicants  evaluated?

Usually the first of July, which is common across the Ivy League, we begin to review the credentials of the athletes coaches are looking at, so the coaches can focus their attention on those students who, No. 1, will be successful academically here and, No. 2 and equally important for them, be impact players in their programs. The trend is that these students are applying during early decision, which makes a lot of sense because coaches are investing a lot of time and energy to have the certainty a student is committed to Dartmouth.

Does this put non-athletes who apply early at a disadvantage?

No. Although a good percentage of athletic recruits apply though early decision, they do not comprise a majority of students admitted at that time. Our early-decision pool continues to grow, but it’s much less than 10 percent of the overall applicant pool. Because our early-decision program is binding, I don’t think we’ll ever have thousands and thousands of students ready to make that commitment in December or November.

Do applicants with special artistic or theatrical or musical talents receive any special consideration?

Although there isn’t the formal recruitment that goes on with athletes, some students will reach out to faculty and ensemble directors before they actually apply. Students with these kinds of interests can submit an arts supplement—a CD or a website or slides with information on their arts engagement. Faculty and the ensemble directors evaluate the supplementary materials for us. Their evaluations are an important part of the review process for students with significant talent and engagement in the arts.

Dartmouth says it’s need-blind, yet the common app asks right up top whether a student will be applying for aid.

We don’t take this into account in any way. It’s really just a piece of data that enables the financial aid office to organize its electronic files in the event that students apply for financial aid.

How does the percentage of students needing aid remain fairly constant year to year?

Does the College feel an obligation to educate Native Americans?

Yes. This important part of Dartmouth’s founding mission has been a central focus of the admissions staff since President Kemeny recommitted the College to its historic vision and in 1970 instructed the admissions office to actively recruit Native-American students. We expend considerable energy in reaching out and traveling to Native communities around the country. We are very appreciative of the commitment of current Native students, faculty, staff and alumni in assisting us to make sure we’re casting a wide net and providing a personal connection to the College.

As dean of financial aid how do you respond to parents who ask how Dartmouth can justify cost increases that outstrip inflation?

I know it’s tough for families—with one daughter in college and another about to enter, I feel it too. In justifying the cost, I remind parents that every student receives an exceptional undergraduate education for, at most, half of what it costs us to do what we do. We’re about intimacy, the interaction between students and faculty, and a tremendous range of opportunities and resources. We also  have a very strong financial aid program, even though we had to re-institute some loans for students from families with incomes above $75,000 beginning this year. Below that income level a student attends for free. We’re committed to meeting the full need of all of our students for all four years, and there are not a lot of schools that can say that.

Did you encounter any surprises as your daughters applied to other schools?

I came away thinking, “This is so complicated and so stressful”—and I’m supposed to know what’s going on! It gave me greater empathy and appreciation for the complexity of this process.

What do you tell alumni interviewers concerned about making stronger cases for students they meet?

We’ve tried to bring more transparency to the process for our interviewers so they understand they don’t need to ask a student’s SAT scores. We want their help teasing out the more nuanced intellectual and personal qualities—those things that you can’t rank or score but make us all unique individuals. Interview evaluations that share anecdotes or help tell a candidate’s story can be very helpful.

Many alums say, “I could never get into Dartmouth now.” Could you?

If you think about where any of us was as a high school student in the context of our peer group and you fast-forward 20 or 30 or 40 years later—and think about all the things that changed in terms of parenting, schools, activities, standardized testing, etcetera—I like to think we would all be in that same relative position. The rising tide lifts all boats, right?