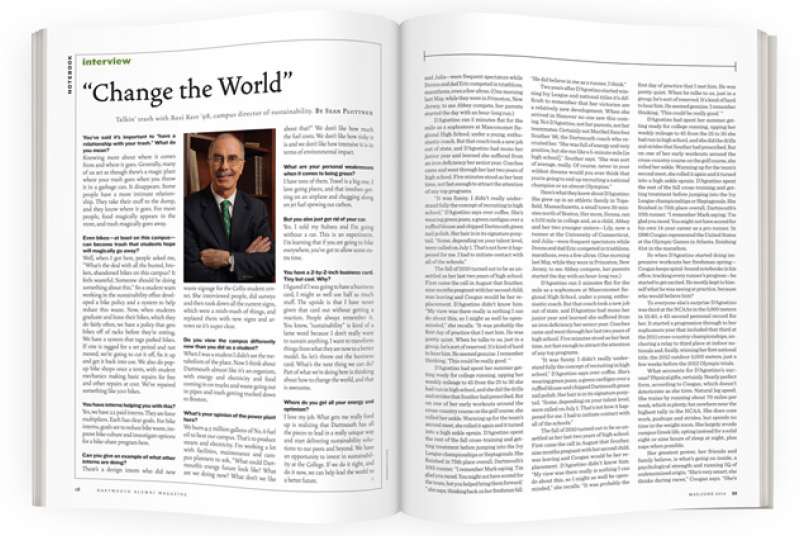 What does becoming president of Dartmouth mean to you?
I have landed my dream job. I am completely thrilled and can’t wait to get back there and be part of that community again.

Do you know how your name was introduced into the applicant pool?
I knew there was an opening but didn’t think about it as an option until I was contacted by the search firm. I don’t know how my name got put in the hopper.

Were you a candidate when President Jim Wright stepped down?
No, I wasn’t. I was not in a provost position at that point.

Have you heard or seen comments bemoaning the hiring of “another white male” and expressing concerns about a lack of diversity in this position?
Well, I’m a very strong supporter of diversity. There are very clear academic studies that show the value it brings to problem solving. We are living in an increasingly diverse world, and our students are going to go out and have to function in a diverse workplace, whether it’s domestically or globally.

You were in Alpha Delta. What’s a self-described math nerd doing in the place known as Animal House?
I took away a lot of real positives from my experiences as a member of Alpha Delta. Number One is lifelong friendships. My closest friendships in life are with the brothers I had at Alpha Delta. There are probably two dozen of us. We get together every year. We correspond by e-mail regularly. A few of them live nearby. I think there were a number of us who were quite strong academically, and that was part of the character of the people who were there.

Your yearbook doesn’t list much in the way of extracurricular activities for you. How did you spend your undergraduate days?
I did a lot with the mathematics community. There was a group of fellow honors majors in math, and we got together regularly, had study groups where we looked at papers, read them together. So a lot of it was centered around my mathematics studies.

Is there a particular moment you recall when math sparked your interest?
When I was at Dartmouth. What struck me was the joy the mathematics faculty had for their work. As I got to know some of them, and they talked about the theorems they were working on, just the way their faces lit up—I looked at them and I said, “Boy, they love what they’re doing. That’s what I want to do for the rest of my life.”

What initially led you to seek admission to Dartmouth?
I came out of this small town in the Adirondack Mountains, and when I toured around and I saw the campus, it really felt like home to me. It felt like a place where I could really be successful.

Did you have any friends or relatives who preceded you as a student here?
I had no sort of legacy connections at all. When I got in, the Dartmouth alum who did interviews in that part of the world said, “That’s just so great. No one from here has ever gotten into Dartmouth before.”

You’ve described your first term as “pretty rough.” Why?
I came from a small town—Gouverneur, New York. It was a rough-and-tumble place. There was not a high priority placed on the life of the mind. I had not been challenged and developed intellectually. I had a weak view of the world, and not much confidence. I was highly challenged by the academics that first term, but I found people who helped me and nurtured me. It was a great place for me to land.

Do you have a favorite class from your student days?
More than classes, it’s the faculty members I remember. They challenged me in a good, nurturing way. Jim Baumgartner was one. Donald Pease was another. Bob Norman, Ken Bogart, Joan Hutchinson. I also remember being very inspired by John Kemeny. I took a class from him, and just the fact that he would take the time to teach mathematics while he was busy being president was impressive.

Do you have a favorite place somewhere on campus?
Baker Library has always been one of my favorite spots.

How would you describe your approach to managing people?
I think people would say that I’m calm. I’m a listener. I think they would say that once I’ve heard the full story I’m very decisive. I think people would say that I’m fair and that I’m visionary in the sense that—and this is important for a college president—I’m always looking ahead several steps. Institutions of higher education can transform themselves, but they can’t transform themselves quickly. That’s why you need a president who is always looking way down the road to see what’s coming.

To whom do you turn for advice?
I like to listen to lots of people and sort out what I’m hearing, so I think I try to seek advice broadly.

Do you know and will you consult with Jim Wright or Jim Kim?
I know them both and yes, I certainly will be consulting with them. I’ve already talked to each of them.

Can you share anything they said?
I don’t think they said anything surprising. Dartmouth is a great institution, and it aspires to be even better. They both have an absolute love for the place and want it to succeed, so I think they’re going to be a big help to me.

Can you sum up what the key is to managing a big university budget?
If I had to pick one word, it would be discipline. By that I mean that you have the right incentives in place within your financial system, that you have a strong culture of asking whether there’s a more valuable way to spend the resources. It’s something we’ve done remarkably well at the University of Michigan, helping us through the most challenging fiscal climate and set of circumstances that this university has ever seen.

What role have you played in fundraising at Michigan—and how might that compare with your role as Dartmouth president?
Michigan, interestingly, has the longest history of philanthropy of any public university. We’ve been very active in fundraising since the 1970s. We now have the seventh largest endowment in the country, so it’s a big operation here. When it comes to fundraising, it’s really all hands on deck here. I probably spend about 20 percent of my time on fundraising or donor activities. It will be an even larger part of my responsibility as president, and I look forward to that. We’ve got a great story to tell and have an audience that dearly loves the place, so it’s a fun thing to do.

What’s your biggest concern about 18- to 22-year-olds today?
My biggest concern as president of one of the premier educational institutions is that we won’t help them realize their full potential. They’ve got passion to better the world, and we’ve got four years to mold that into something special, so my biggest concern or challenge is how we make sure that happens.

Do you have any thoughts on dealing with hazing on campus, and the media surrounding it?
Sure. I expect student life to be based on a foundation of respect, that people respect each other and respect themselves. A safe, productive, healthy college environment is critical to the positive student experience that I had, so I will be focused on this as president. I believe that I’m well placed to help address these issues.

As an undergraduate were you ever involved in or aware of any sort of student hazing?
To be honest, I didn’t see any hazing as part of my Alpha Delta experience, so whatever it was, it couldn’t have been much. Just to be clear: Any behaviors that can cause physical and psychological harm—high-risk drinking, hazing, extreme hazing, sexual assault—they have no place on any college campus, and every effort must be made to curtail them.

What was it like for you serving on the National Security Agency board from 1994 to 2007?
The National Security Agency, as you may know, is the world’s largest employer of mathematicians. Any kind of encryption system is based on some sort of mathematical problem, so I worked technically for the agency for several summers and then ended up on the director’s advisory board.

What sorts of things did the board discuss?
I really can’t offer specifics.

How do you and your wife, Gail Gentes, spend your free time?
We’re very active. We downhill ski and cross-country ski. We walk, hike and bike a lot. We also like to play golf. And we’ve got a couple of Labradors, too. We’re big outdoors people.

You do realize it’s not quite as loud in Hanover on Saturday afternoons in the fall as it is in Ann Arbor?
Look, Big 10 football is really special. The Big House [Michigan Stadium, which seats almost 110,000] is special. I’m going to miss that—it’s a real experience. But I’m going to have lots of other great things that make up for it.