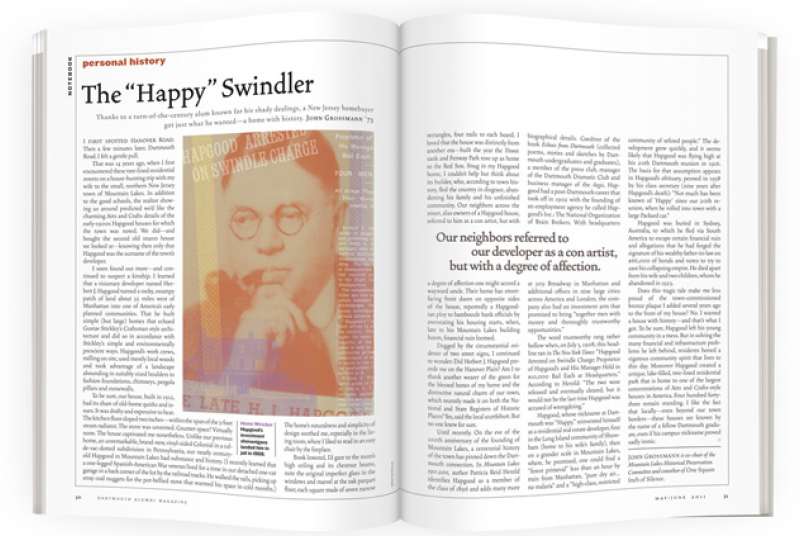 Thanks to a turn-of-the-century alum known for his shady dealings, a New Jersey homebuyer got just what he wanted—a home with history.
John Grossmann ’73 | May - June 2011

That was 14 years ago, when I first encountered these tree-lined residential streets on a house-hunting trip with my wife to the small, northern New Jersey town of Mountain Lakes. In addition to the good schools, the realtor showing us around predicted we’d like the charming Arts and Crafts details of the early-1900s Hapgood houses for which the town was noted. We did—and bought the second old stucco house we looked at—knowing then only that Hapgood was the surname of the town’s developer.

I soon found out more—and continued to suspect a kinship. I learned that a visionary developer named Herbert J. Hapgood turned a rocky, swampy patch of land about 35 miles west of Manhattan into one of America’s early planned communities. That he built simple (but large) homes that echoed Gustav Stickley’s Craftsman style architecture and did so in accordance with Stickley’s simple and environmentally prescient ways. Hapgood’s work crews, milling on site, used mostly local woods and took advantage of a landscape abounding in suitably sized boulders to fashion foundations, chimneys, pergola pillars and stonewalls.

To be sure, our house, built in 1912, had its share of old-home quirks and issues. It was drafty and expensive to heat. The kitchen floor sloped two inches—within the span of the 3-foot steam radiator. The stove was unvented. Counter space? Virtually none. The house captivated me nonetheless. Unlike our previous home, an unremarkable, brand-new, vinyl-sided Colonial in a cul-de-sac-dotted subdivision in Pennsylvania, our nearly century-old Hapgood in Mountain Lakes had substance and history. (I recently learned that a one-legged Spanish-American War veteran lived for a time in our detached one-car garage in a back corner of the lot by the railroad tracks. He walked the rails, picking up stray coal nuggets for the pot-bellied stove that warmed his space in cold months.) The home’s naturalness and simplicity of design soothed me, especially in the living room, where I liked to read in an easy chair by the fireplace.

Book lowered, I’d gaze to the room’s high ceiling and its chestnut beams, note the original imperfect glass in the windows and marvel at the oak parquet floor, each square made of seven narrow rectangles, four nails to each board. I loved that the house was distinctly from another era—built the year the Titanic sank and Fenway Park rose up as home to the Red Sox. Snug in my Hapgood home, I couldn’t help but think about its builder, who, according to town history, fled the country in disgrace, abandoning his family and his unfinished community. Our neighbors across the street, also owners of a Hapgood house, referred to him as a con artist, but with a degree of affection one might accord a wayward uncle. Their home has street-facing front doors on opposite sides of the house, reportedly a Hapgoodian ploy to bamboozle bank officials by overstating his housing starts, when, late in his Mountain Lakes building boom, financial ruin loomed.

Dogged by the circumstantial evidence of two street signs, I continued to wonder: Did Herbert J. Hapgood precede me on the Hanover Plain? Am I to thank another wearer of the green for the blessed bones of my home and the distinctive natural charm of our town, which recently made it on both the National and State Registers of Historic Places? Yes, said the local scuttlebutt. But no one knew for sure.

Until recently. On the eve of the 100th anniversary of the founding of Mountain Lakes, a centennial history of the town has pinned down the Dartmouth connection. In Mountain Lakes 1911-2011, author Patricia Reid Herold identifies Hapgood as a member of the class of 1896 and adds many more biographical details. Coeditor of the book Echoes from Dartmouth (collected poems, stories and sketches by Dartmouth undergraduates and graduates), a member of the press club, manager of the Dartmouth Dramatic Club and business manager of the Aegis, Hapgood had a post-Dartmouth career that took off in 1902 with the founding of an employment agency he called Hapgood’s Inc.: The National Organization of Brain Brokers. With headquarters at 309 Broadway in Manhattan and additional offices in nine large cities across America and London, the company also had an investment arm that promised to bring “together men with money and thoroughly trustworthy
opportunities.”

The word trustworthy rang rather hollow when, on July 3, 1908, this headline ran in The New York Times: “Hapgood Arrested on Swindle Charge; Proprietor of Hapgood’s and His Manager Held in $10,000 Bail Each at Headquarters.” According to Herold: “The two were released and eventually cleared, but it would not be the last time Hapgood was accused of wrongdoing.”

Hapgood, whose nickname at Dartmouth was “Happy,” reinvented himself as a residential real estate developer, first in the Long Island community of Shoreham (home to his wife’s family), then on a grander scale in Mountain Lakes, where, he promised, one could find a “forest primeval” less than an hour by train from Manhattan, “pure dry air…no malaria” and a “high-class, restricted community of refined people.” The development grew quickly, and it seems likely that Hapgood was flying high at his 20th Dartmouth reunion in 1916. The basis for that assumption appears in Hapgood’s obituary, penned in 1938 by his class secretary (nine years after Hapgood’s death): “Not much has been known of ‘Happy’ since our 20th reunion, when he rolled into town with a large Packard car.”

Hapgood was buried in Sydney, Australia, to which he fled via South America to escape certain financial ruin and allegations that he had forged the signature of his wealthy father-in-law on $66,000 of bonds and notes to try to save his collapsing empire. He died apart from his wife and two children, whom he abandoned in 1923.

Does this tragic tale make me less proud of the town-commissioned bronze plaque I added several years ago to the front of my house? No. I wanted a house with history—and that’s what I got. To be sure, Hapgood left his young community in a mess. But in solving the many financial and infrastructure problems he left behind, residents honed a vigorous community spirit that lives to this day. Moreover Hapgood created a unique, lake-filled, tree-lined residential park that is home to one of the largest concentrations of Arts and Crafts-style houses in America. Four hundred forty-three remain standing. I like the fact that locally—even beyond our town borders—these houses are known by the name of a fellow Dartmouth graduate, even if his campus nickname proved sadly ironic.

John Grossmann is co-chair of the Mountain Lakes Historical Preservation Committee and coauthor of One Square Inch of Silence.