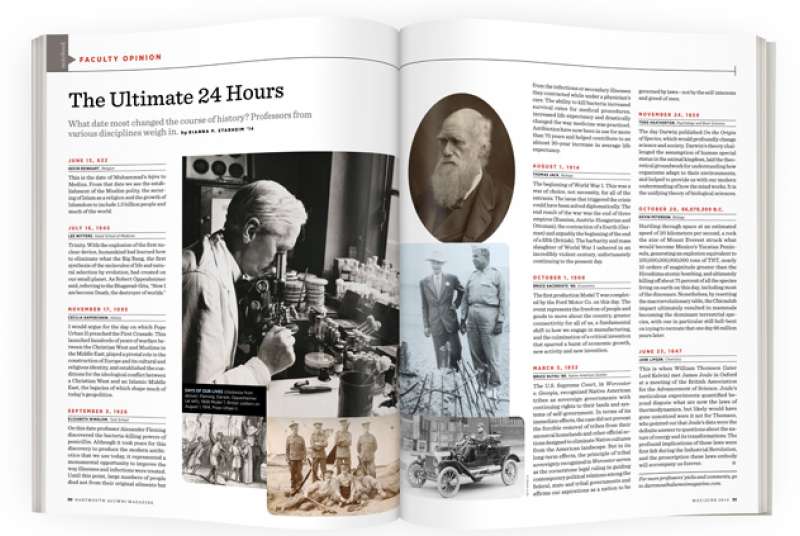 What date most changed the course of history? Professors from various disciplines weigh in.
Rianna P. Starheim ’14 | May - Jun 2014

June 13, 622
Kevin Reinhart, Religion
This is the date of Muhammad’s hijra to Medina. From that date we see the establishment of the Muslim polity, the securing of Islam as a religion and the growth of Islamdom to include 1.5 billion people and much of the world.

July 16, 1945
Lee Witters, Geisel School of Medicine
Trinity. With the explosion of the first nuclear device, humankind had learned how to eliminate what the Big Bang, the first synthesis of the molecules of life and natural selection by evolution, had created on our small planet. As Robert Oppenheimer  said, referring to the Bhagavad-Gita, “Now I am become Death, the destroyer of worlds.”

November 17, 1095
Cecilia Gaposchkin, History
I would argue for the day on which Pope Urban II preached the First Crusade. This launched hundreds of years of warfare between the Christian West and Muslims in the Middle East, played a pivotal role in the construction of Europe and its cultural and religious identity, and established the conditions for the ideological conflict between a Christian West and an Islamic Middle East, the legacies of which shape much of today’s geopolitics.

September 3, 1928
Elizabeth Winslow, Tuck School
On this date professor Alexander Fleming discovered the bacteria-killing powers of penicillin. Although it took years for this discovery to produce the modern antibiotics that we use today, it represented a monumental opportunity to improve the way illnesses and infections were treated. Until this point, large numbers of people died not from their original ailments but from the infections or secondary illnesses they contracted while under a physician’s care. The ability to kill bacteria increased survival rates for medical procedures, increased life expectancy and drastically changed the way medicine was practiced. Antibiotics have now been in use for more than 70 years and helped contribute to an almost 30-year increase in average life expectancy.

August 1, 1914
Thomas Jack, Biology
The beginning of World War I. This was a war of choice, not necessity, for all of the entrants. The issue that triggered the crisis could have been solved diplomatically. The end result of the war was the end of three empires (Russian, Austria-Hungarian and Ottoman), the contraction of a fourth (German) and arguably the beginning of the end of a fifth (British). The barbarity and mass slaughter of World War I ushered in an incredibly violent century, unfortunately continuing to the present day.

October 1, 1908
Bruce Sacerdote ’90, Economics
The first production Model T was completed by the Ford Motor Co. on this day. The event represents the freedom of people and goods to move about the country, greater connectivity for all of us, a fundamental shift in how we engage in manufacturing, and the culmination of a critical invention that spurred a burst of economic growth, new activity and new invention.

March 3, 1832
Bruce Duthu ’80, Native American Studies
The U.S. Supreme Court, in Worcester v. Georgia, recognized Native American tribes as sovereign governments with continuing rights to their lands and systems of self-government. In terms of its immediate effects, the case did not prevent the forcible removal of tribes from their ancestral homelands and other official actions designed to eliminate Native cultures from the American landscape. But in its long-term effects, the principle of tribal sovereignty recognized in Worcester serves as the cornerstone legal ruling in guiding contemporary political relations among the federal, state and tribal governments and affirms our aspirations as a nation to be governed by laws—not by the self-interests and greed of men.

November 24, 1859
Todd Heatherton, Psychology and Brain Sciences
The day Darwin published On the Origin of Species, which would profoundly change science and society. Darwin’s theory challenged the assumption of human special status in the animal kingdom, laid the theoretical groundwork for understanding how organisms adapt to their environments, and helped to provide us with our modern understanding of how the mind works. It is the unifying theory of biological sciences.

October 20, 66,078,309 B.C.
Kevin Peterson, Biology
Hurtling through space at an estimated speed of 20 kilometers per second, a rock the size of Mount Everest struck what would become Mexico’s Yucatan Peninsula, generating an explosion equivalent to 100,000,000,000,000 tons of TNT, nearly 10 orders of magnitude greater than the Hiroshima atomic bombing, and ultimately killing off about 75 percent of all the species living on earth on this day, including most of the dinosaurs. Nonetheless, by resetting the macroevolutionary table, the Chicxulub impact ultimately resulted in mammals becoming the dominant terrestrial species, with one in particular still hell-bent on trying to recreate that one day 66 million years later.

June 23, 1847
Jane Lipson, Chemistry
On this date, during a meeting of the British Association for the Advancement of Science, William Thompson (later Lord Kelvin) highlighted James Joule’s meticulous experiments quantifying beyond dispute the equivalence of energy transferred as heat and energy transformed into mechanical work. Thompson pointed out that Joule’s results were the definitive answer to questions about the nature of energy and its transformations; their work led directly to the Second Law of Thermodynamics. The Laws have profound implications, first felt during the Industrial Revolution, destined to accompany us forever, as we strive to adapt this universe to our needs and desires.

July 4, 1785
William Dade, Earth Sciences
On this date James Hutton presented his ideas “Concerning the System of the Earth, its Duration and Stability” to the Royal Society of Edinburgh. Hutton understood that the surface of the earth undergoes constant renewal through a natural cycle of erosion, transport, burial and uplift of earth materials. His insights were truly apiece with the Scottish enlightenment—they required no supernatural powers, but did require vast amounts of geologic time. Such ideas remain humbling and inspiring, established geology as a proper scientific endeavor and laid the groundwork for one of the most important intellectual contributions of the 20th century: plate tectonics.

The 1930s-1940s
Kendall Hoyt, Engineering
While it is hard to pin an exact date on this event, we cannot overlook the development of antibiotics beginning in the 1930s and 1940s. Antibiotics dramatically reduced the mortality rate from infectious diseases (75 percent by some estimates) and transformed the practice of medicine by permitting medical interventions that we take for granted today. These range from invasive surgery to mechanical ventilation to aggressive chemotherapy. Unfortunately, we have begun to take antibiotics for granted as well. Their injudicious use in clinical practice, agriculture and acquaculture is breeding new bugs that resist available drugs. Meanwhile, the discovery of new drugs has slowed to a crawl due to a collection of scientific challenges and market failures.

Undecided
Carl Thum, Academic Skills Center (Writing)
In my mind it’s a tie between the birth of Christ and the invention of the Internet. I’d lean toward the former because of the profound impact Christianity has had on millions and millions of people, culture, politics, history and belief systems. Of course, you can say some of the same things about the Internet.

1519
Deborah Nichols, Anthropology
In this year Hernán Cortés and his troops landed on the Mexican coast, initiating an encounter between the Spanish and the Aztecs that changed the histories of both Europe and the Americas and the shape of the modern world. The defeat two years later of Tenochtitlan-Tlatelolco, the Aztec imperial capital, was as much at the hands of the Aztecs’ enemies as from the military prowess of Cortés and his soldiers with their steel weapons and horses and Christian beliefs. The same year brought smallpox and other Eurasian diseases to the North American mainland, with devastating consequences for native populations.