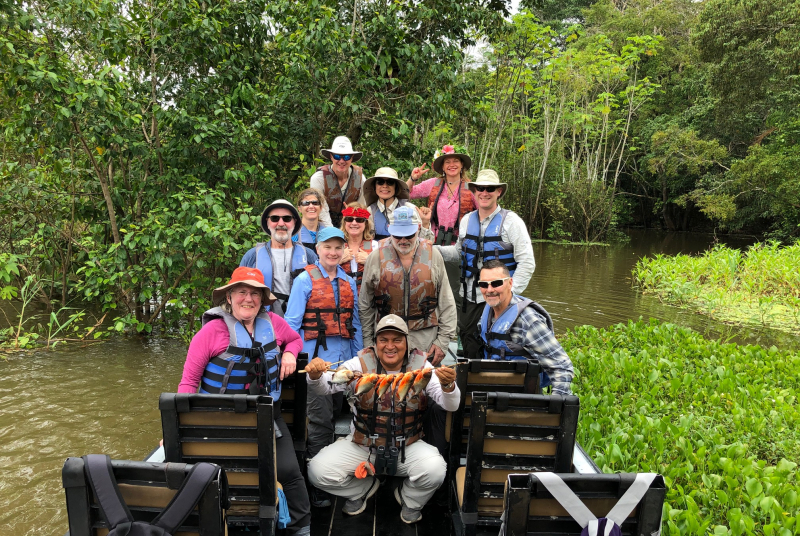 It was supposed to be the highlight of a Dartmouth-sponsored alumni trip of the Amazon River Basin: a visit to Machu Picchu.

But on the morning that a group of 18 Dartmouth alumni gathered to trek to the ancient Incan monument, they received unexpected news: The president of Peru had announced that he was closing the country’s borders at midnight to help stave off the threat of the COVID-19 pandemic.

“We had 12 hours to get home,” recalls Nate Dominy, a professor of anthropology who attended as the lecturer on the trip. Dominy, who had previously led other Dartmouth alumni expeditions, knew that if the group didn’t get out that day, it would be stuck in South America.

They quickly abandoned plans to see the ancient Incan site in the Andes, dashing instead to a nearby airport in Cusco. There the travel agency that had organized the trip arranged for a charter flight from Cusco to Lima, the country’s capital—and site of the only international airport in the country.

Unfortunately, when the group’s plane touched down in Lima that night, they were too late to catch their flight back to the United States. The airport had closed, forcing the group to hunker down at a nearby Westin Hotel to plan next steps.

In the coming days, Dartmouth alumni who live in Peru got wind of the group’s plight, created a WhatsApp texting group, and offered to send food, medication, and clothing to the hotel for their fellow alums. “I was so impressed with how the alumni in that country could come together and support a bunch of strangers whom they don’t know but were still united by our connections at Dartmouth,” Dominy says.

Gisele (Laffaye) Pansze ’88, who was on the expedition with her husband, Trent ’88, registered with the U.S. embassy in Lima, posted an online message to her class’ Facebook page seeking help, and emailed classmates N.Y. Sen. Kirsten (Rutnik) Gillibrand and U.S. Secretary of Health and Human Services Alex Azar. Representatives for both responded that they would alert Gillibrand and Azar and do what they could to help.

Meanwhile, back in Hanover, Dartmouth was working around the clock to get the group out of the country as fast as possible, coordinating with Smith College, which had 12 alumni on the trip, and Gohagan Travel, which organized the trip for both schools.

“The situation caught everyone off-guard, and it moved very rapidly,” says Robin Albing, Tu’81, director of Dartmouth’s lifelong learning program, which arranges alumni trips around the world. “We had task force meetings every day to try and move it along. We felt we had the full support of the administration and our risk management team. It was a great team effort.”

“We got out at a time when other people didn’t.”

While quarantined at the hotel waiting for word on a flight home, the alums bonded and were generally in good spirits, despite the circumstances. It helped that they got to know each other in the prior week while exploring the Amazon River Basin. “These trips tend to foster a strong sense of camaraderie and community from the travelers,” Dominy says. “That only became amplified during the quarantine period. People really forged strong friendships and got closer by coming together and sharing their feelings and experiences. This trip had the strongest esprit de corps I’ve ever seen.”

By the end of the week, Dartmouth and Smith had arranged for a charter flight to bring the group back into the States on Saturday, March 21, splitting the cost of the flight, believed to be approximately $15,000. The travelers celebrated with pisco sours at the hotel bar, though they were told to keep their pending departure hush-hush because not everyone else at the hotel would be able to get out. “It was a relief that there was potentially an end in sight,” Pansze recalls. “We were among the first 450 people to be repatriated, so whoever pulled those strings did an amazing job.”

The flight the alumni boarded was only the second plane to make it out of the country following the Peruvian president’s order to close its borders. Very few repatriation flights have been allowed since—and thousands of Americans remain stranded in Peru. “When the plane landed in Miami, people were cheering,” says Dominy.

For the time being, Dartmouth will not be organizing more alumni travel groups. “All trips have been canceled or postponed,” says Albing. “We certainly hope alumni will be able to do trips a year from now. Nobody knows when this will subside.”

When the alumni group departed the United States on March 6, the South American country was reporting few cases of COVID-19. By the time the group emerged from deep in the Amazon, the situation had changed drastically. As the travelers left Peru, the country had 263 cases. “Had the timing been slightly different, maybe we wouldn’t have gone,” says Gisele Pansze.

Gary Day ’69, who went on the trip in part to practice his Spanish, says he is grateful to be back home. “I thought the team, everybody from top to bottom, Dartmouth and Gohagan Travel, did a great job,” he said. “We got out at a time when other people didn’t.”

So far, no one has experienced symptoms of COVID-19, and life is getting back to normal for Dominy, who is in the Upper Valley to teach remotely during spring term. “Had we not gotten out when we did, we’d still be there right now,” he says. “We were very, very lucky.”

Betsy Vereckey is a freelance writer who lives in Hanover. She’s a frequent contributor to DAM.