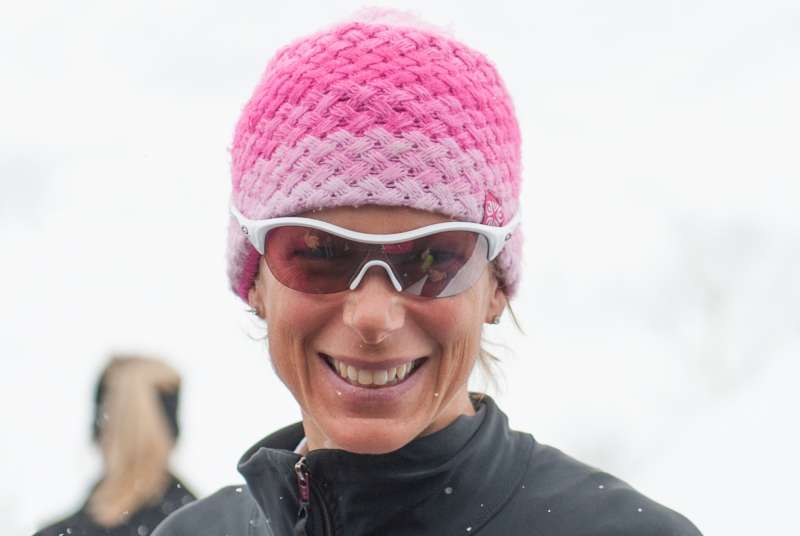 Nina (Cook) Silitch ’94 grew up on the slopes of New England as an alpine and Nordic racer in high school and as a member of Dartmouth’s ski team and Mountaineering Club. But before moving to Chamonix, France, in 2001, she’d never tried ski mountaineering, or “skimo.”

In this sport, skiers hoof up tall peaks, often several thousand vertical feet, wearing skis that are sheathed in snow-gripping mohair climbing skins. Then they rip off the skins and blast downhill. “At the top there are people with cowbells cheering,” she says. “It is essentially the old way of skiing—before chair lifts—when you’d work for your turns.” Events range from team efforts that can last four days to individual sprints—Silitch’s specialty—that are over in three minutes.

Soon after seeing skimo for the first time, Silitch’s competitive side kicked in. She started training hard in 2008 and became one of the only American contenders on the European-dominated circuit.

Silitch didn’t enter her first major contest until she was 35, after she gave birth to her two sons, which put her up against racers in their 20s. Yet Silitch took home gold in 2012 at the World Cup, racing in Tromso, Norway, at the age of 40. She claimed gold again the following year—this time on the slopes of Italy’s active volcano, Mount Etna. She’s the only North American to accomplish this feat. “Winning two gold medals wasn’t really what was important,” she says. “It was about the journey—the sweat, the tears—all of the things that got me there.”

Until recently Silitch lived in Park City, Utah, where she juggled work as a fifth-grade teacher and advocate for skimo, which Outside magazine calls the hottest winter sport in North America. Silitch founded the Park City Ski Mountaineering Team in 2015, and this year the team has at least two junior members eligible to try out for the world championships. Ski mountaineering will also be part of the 2020 Winter Youth Olympics, and the sport’s governing body is pushing for its inclusion in the 2026 Olympics. “It would be one of my dreams to get one of these kids there,” says Silitch.

After she earned a teaching certificate in elementary education at the College, Silitch coached under the College’s ski director, Cami Thompson Graves. She then led courses on environmental ethics and wilderness education in the United States and East Africa as a field instructor for the National Outdoor Leadership School.

In search of a full-time teaching position, Silitch settled in Boulder, Colorado, where she met her future husband, Michael, a mountain guide. After they relocated to Chamonix, a village in the French Alps that’s home to Mont Blanc, Europe’s highest summit, she cofounded the Chamonix Ski Alpinism Club. It has grown to 80-plus members from seven countries in two years.

Now Silitch is looking forward to sharing her love for skimo in the Upper Valley. This fall she returned to New Hampshire to teach at Cardigan Mountain School in Canaan and coach its mountain biking and Nordic ski teams. She’ll continue to advise the Park City program and looks forward to traveling to the 2019 world championships in Villars, Switzerland.

“I will continue to help grow skimo in the United States and serve as an ambassador for the sport,” Silitch says. “The presence of more Americans is really important.”