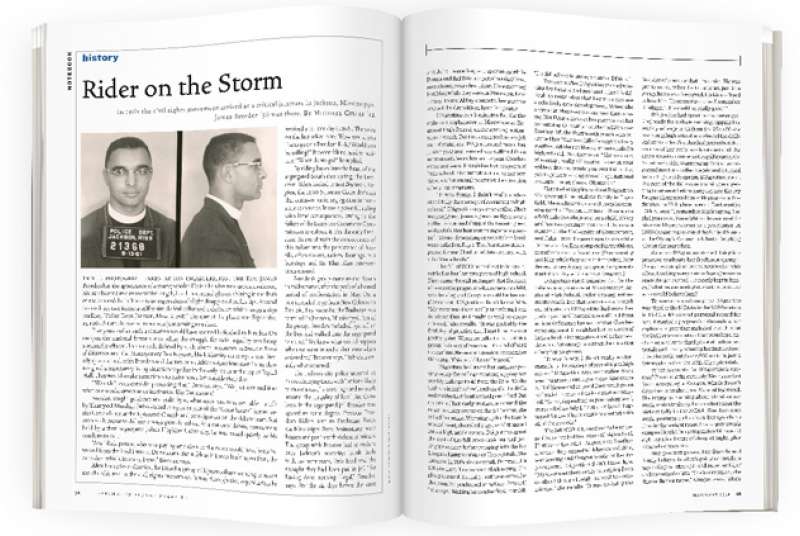 Rider on the Storm

In 1961 the civil rights movement arrived at a critical juncture in Jackson, Mississippi. James Breeden ’56 was there.
Michael Gillis ’12 | Sept - Oct 2011

In the photograph taken at his incarceration, the Rev. James Breeden has the appearance of a young scholar. He is a handsome man: clean-shaven, his hair buzzed to a conservative length, his thin-rimmed glasses shining in the flash of the camera’s bulb. There is an expression of slight disapproval on his lips. Around his neck are two items: a stiff white clerical collar and a chain, on which hangs a sign reading, “Police Dept. Jackson, Miss. 21368.” The date of the photo was September 13, 1961. A tumultuous summer was just coming to a close.

Five years earlier such a situation would have seemed farfetched to Breeden. On campus the national fervor surrounding the struggle for racial equality was being summarily effaced. In an epoch defined by such pivotal moments as Brown v. Board of Education and the Montgomery Bus Boycott, black identity on campus was literally quarantined, with Breeden and the two other African-American men in his class assigned a mandatory living situation together in the only room at the top of Topliff Hall. They would awake sometimes to racist notes left outside their door.

“We didn’t even consider protesting that,” Breeden says. “We just accepted it as what one would expect at an institution like Dartmouth.”

Breeden sought guidance and stability in what resources were available—a talk by Thurgood Marshall (who visited campus as part of the “Great Issues” lecture series), attendance at the Episcopal Church and participation on the debate team. But even such recourse did not always provide solace. At a national debate tournament held by a then-segregated Johns Hopkins University, he was asked quietly by his coach to sit out.

“Any black person who was paying attention to the news would have been involved from the level I was at Dartmouth. But it felt as if I were looking on from the outside—which, in a way, I was,” Breeden says.

After his 1960 ordination, he joined a group of Episcopalians wanting to assert the church’s role in the civil rights movement. It was through that organization he received a call one day in 1961. The voice on the line asked him: “How would you like to go on a Freedom Ride? Would you be willing?” Breeden felt no need to hesitate. “When do we go?” he replied.

By riding buses into the heart of the segregated South that spring, the Freedom Riders looked to test Boynton v. Virginia, the 1960 Supreme Court decision that outlawed racial segregation in interstate commerce. It was a powerful ruling with lame consequences, owing to the failure of the Interstate Commerce Commission to enforce it. For the early Freedom Riders of 1961 the consequence of this failure was the persistence of hostile, often violent, racism. Beatings, bus burnings and Ku Klux Klan interventions ensued.

Breeden’s group came to the South in midsummer, after the peak of a heated period of confrontation in May. On a ride intended to go from New Orleans to Detroit, they paused at the Trailways bus terminal in Jackson, Mississippi. Part of the group, Breeden included, got off of the bus and walked into the segregated terminal.“We knew what would happen when we went in and didn’t leave when ordered to,” Breeden says. “Which is exactly what occurred.”

The Jackson city police arrested 15 riders, charging them with “actions likely to cause a riot,” a wording used to work around the illegality of local Jim Crow laws. In the segregated jail Breeden was spared to some degree. Previous Freedom Riders sent to Parchman Farm, the Mississippi State Penitentiary,  were beaten and put in with violent criminals. The group with Breeden had to endure only Jackson’s austerity: bunk beds with no mattresses, little food and the thought they had been put in jail “for having done nothing illegal,” Breeden says. For the six days before the state court overturned the charges, the group bided its time. Yet the spirit of civil disobedience was still alive inside the Jackson holding cell.

“When they tried to find out what race we were—which was very important to them—one of our riders said, ‘human race.’ They couldn’t get him to change,” Breeden recalls.

Following their release six days later, Breeden and a fellow rider brought a federal suit against the Jackson chief of police and the presiding judge, charging the two with denying them their civil rights. The decision, partially upheld in court, began an eight-year period of civil rights protests organized and led by Breeden in and around Boston. Later he went on to hold a position on the faculty for the social policy program of Harvard’s Graduate School of Education in 1969 and to earn his doctorate in education administration in 1972. From 1984 to 1995 Breeden served as dean of the Tucker Foundation at Dartmouth, where he found the campus “radically changed.”

This past spring the 50th anniversary of the 1961 Freedom Rides was celebrated in Jackson. Although the intervening years have brought new opportunities, Breeden’s commitment to his religious roots has not faltered. Now a reverend with the Episcopal Church, he lives in Leyden, Massachusetts, with his wife, Jeanne—whom he married in Switzerland in 1958—and looks back on his participation in the rides with pride tempered by experience.

“Our goals were not on Jack and Robert Kennedy’s agenda when they first took office—and Dartmouth was certainly not militantly against segregation, in fact they were complicit with it—but these issues were forced onto their agenda by the nonviolent actions of the civil rights movement,” he says.

Fifty years later, Breeden has found a victory only hinted at in that faded photograph from Jackson.

Michael Gillis is a former DAM intern. He is currently an editor at the Jack-O-Lantern.