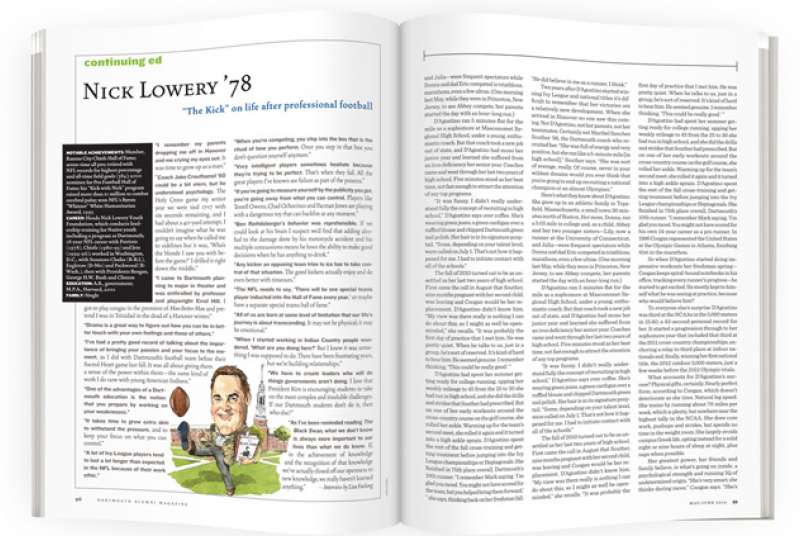 “The Kick” on life after professional football.
Interview by Lisa Furlong | Jan - Feb 2011

“I remember my parents dropping me off in Hanover and me crying my eyes out. It was time to grow up as a man.”

“Coach Jake Crouthamel ’60 could be a bit stern, but he understood psychology. The Holy Cross game my senior year we were tied 17-17 with six seconds remaining, and I had about a 40-yard attempt. I couldn’t imagine what he was going to say when he called me to sidelines but it was, ‘Who’s the blonde I saw you with before the game?’ I drilled it right down the middle.”

“I came to Dartmouth planning to major in theater and was enthralled by professor and playwright Errol Hill. I got to play congas in the premiere of Man Better Man and pretend I was in Trinidad in the dead of a Hanover winter.”

“Drama is a great way to figure out how you can be in better touch with your own feelings and those of others.”

“I’ve had a pretty good record of talking about the importance of bringing your passion and your focus to the moment, as I did with Dartmouth’s football team before their Sacred Heart game last fall. It was all about giving them a sense of the power within them—the same kind of work I do now with young American Indians.”

“One of the advantages of a Dartmouth education is the notion that you prepare by working on your weaknesses.”

“It takes time to grow extra skin to withstand the pressure, and to keep your focus on what you can control.”

“A lot of Ivy League players tend to last a lot longer than expected in the NFL because of their work ethic.”

“When you’re competing, you step into the box that is the ritual of how you perform. Once you step in that box you don’t question yourself anymore.”

“Very intelligent players sometimes hesitate because they’re trying to be perfect. That’s when they fail. All the great players I’ve known see failure as part of the process.”

“If you’re going to measure yourself by the publicity you get, you’re going away from what you can control. Players like Terrell Owens, Chad Ochocinco and Pacman Jones are playing with a dangerous toy that can backfire at any moment.”

“Ben Rothlisberger’s behavior was reprehensible. If we could look at his brain I suspect we’d find that adding alcohol to the damage done by his motorcycle accident and his multiple concussions means he loses the ability to make good decisions when he has anything to drink.”

“Any kicker an opposing team tries to ice has to take control of that situation. The good kickers actually enjoy and do even better with timeouts.”

“The NFL needs to say, ‘There will be one special teams player inducted into the Hall of Fame every year,’ or maybe have a separate special teams hall of fame.”

“All of us are born at some level of limitation that our life’s journey is about transcending. It may not be physical; it may be emotional.”

“When I started working in Indian Country people wondered, ‘What are you doing here?’ But I knew it was something I was supposed to do. There have been frustrating years, but we’re building relationships.”

“We have to create leaders who will do things governments aren’t doing. I love that President Kim is encouraging students to take on the most complex and insoluble challenges. If our Dartmouth students don’t do it, then who else?”

“As I’ve been reminded reading The Black Swan, what we don’t know is always more important to our lives than what we do know. If, in the achievement of knowledge and the recognition of that knowledge we’ve actually closed off our openness to new knowledge, we really haven’t learned anything.”