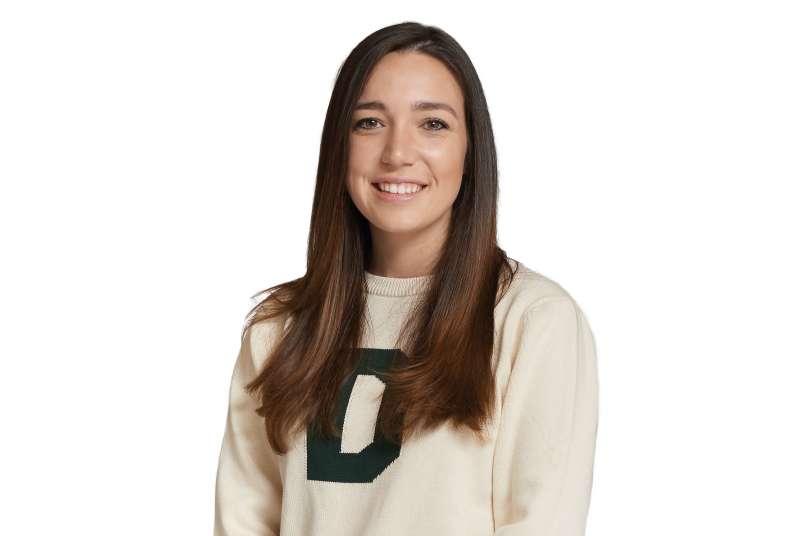 What’s your typical day?
On practice days, I’m there early to get the cameras and scoreboard ready and help put out the MVPs [Mobile Virtual Players]. Then I film different parts of practice. When we travel, a big part is making sure room keys are in order. When you have 100 keys, it’s easy to mess up. On the field, I catch field goals for kickers and film games.

What’s the best part of the job?
Being a part of the team. I wasn’t expecting players to welcome me into the fold. When we won games, they high-fived me. Some of our best players say, “Thank you for what you do,” and I’m like, “But you just won the game. All I did was film.”

What’s changed since freshman year?
Now that I’ve learned the players and positions, it’s improved my ability to film. Coaches have more trust in me. Film is crucial. It’s how they see what they’re doing wrong, because it’s hard to see that in the moment.

Is it difficult working in a male sport?
No. I’m 100-percent respected by the players and coaches. I think I cemented that the first day of practice by throwing a spiral pass. They were like, “Okay, she can hang. She can keep up with the boys.”

Did you know the game well before you became manager?
I grew up in a family that revolved around sports, so I already had a great knowledge of football. Even so, it’s been amazing to learn even more from the coaches and players.

What’s surprised you the most?
How hard the players work and how much strategy is involved in the game.

How is working with coach Buddy Teevens ’79?
He’s incredible. He checks in a lot. It speaks volumes when this leader everyone idolizes takes the time to talk to me. It shows how much he cares about everyone who’s part of his organization.