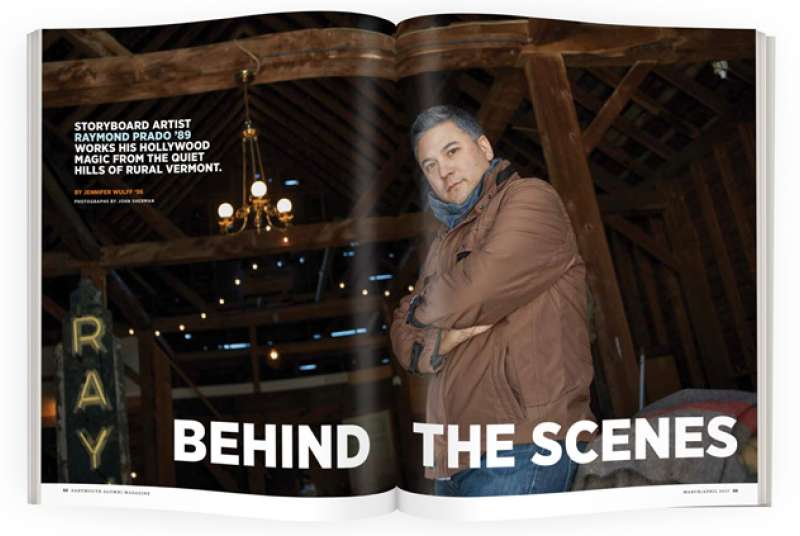 Ray Prado got his first big break in Hollywood by way of a game show. In Los Angeles to interview for a job at Mattel the fall after he graduated, Prado decided on a whim to try his hand as a contestant on the game show Win, Lose or Draw. With the late Charles Nelson Reilly as his partner, he doodled his way to winning $15,000. The prize money was enough for Prado to move to the West Coast and fulfill his real dream of finding a job in the film industry.

“I had no idea how to do it, but ever since I was a kid I wanted to make movies,” he says. “Once I got the check, I packed my bags and went.”

Turns out his drawing skills were good for more than impressing B-list celebrities and live studio audiences. As a storyboard artist who has worked on big-budget franchises such as The Hunger Games and X-Men, the Netflix series Stranger Things, the new Baywatch and nearly everything Taylor Hackford has directed, Prado plays a pivotal role in bringing scripts to life. A storyboard, which is like a graphic novel for a film showing every scene and angle, is not just a guide for those on the cast and crew. It reflects the director’s vision and often inspires it as well. “Sometimes you get people who are naturally adept at this job, and that’s Ray,” says Hackford. “He’s a natural-born filmmaker who immediately gets the cinematic vision and function of whatever we work on.”

Another frequent collaborator is actress Sandra Bullock. Prado first worked with her on 1998’s Hope Floats, which was the first movie made by her production company, Fortis Films. Bullock’s younger sister, Gesine, who was Fortis’ VP and attorney at the time, says Prado wowed her and her fellow producers not just with his talent but his lack of hubris—a rare quality in Hollywood. “He knows his job is to be collaborative and make other people look good,” she says. “His work is so distinctive and artful, but he doesn’t have a huge ego and need to hear how great he is.”

He does happen to hear it quite often from her, though. Prado and Gesine hit it off so well that they got married at Bullock’s Austin, Texas, house in 1999. “We both felt like we’d been beamed down from the same alien planet,” says Gesine. “We just speak the same language.” They stayed in Los Angeles for five more years, but the fast-paced Hollywood life got old. Gesine wanted to turn her baking hobby into a full-time gig, and Prado says he was just “burnt out.” He missed the Upper Valley and wanted to return, so they moved to White River Junction, Vermont. “I’ve felt an affinity toward the area since I left Dartmouth,” he says. “There’s just something special about it.”

For Gesine, who grew up in Virginia, Hanover and its surroundings reminded her of her mother’s village in Bavaria, where she and her sister spent much time as children. “It just felt like home,” she says. “Ray took me to a Dartmouth football game and I said, ‘Hmm. This feels right,’ then we drove across the bridge to Norwich and I said, ‘This really feels really right.’ He was no dummy. He knew I’d love it.” 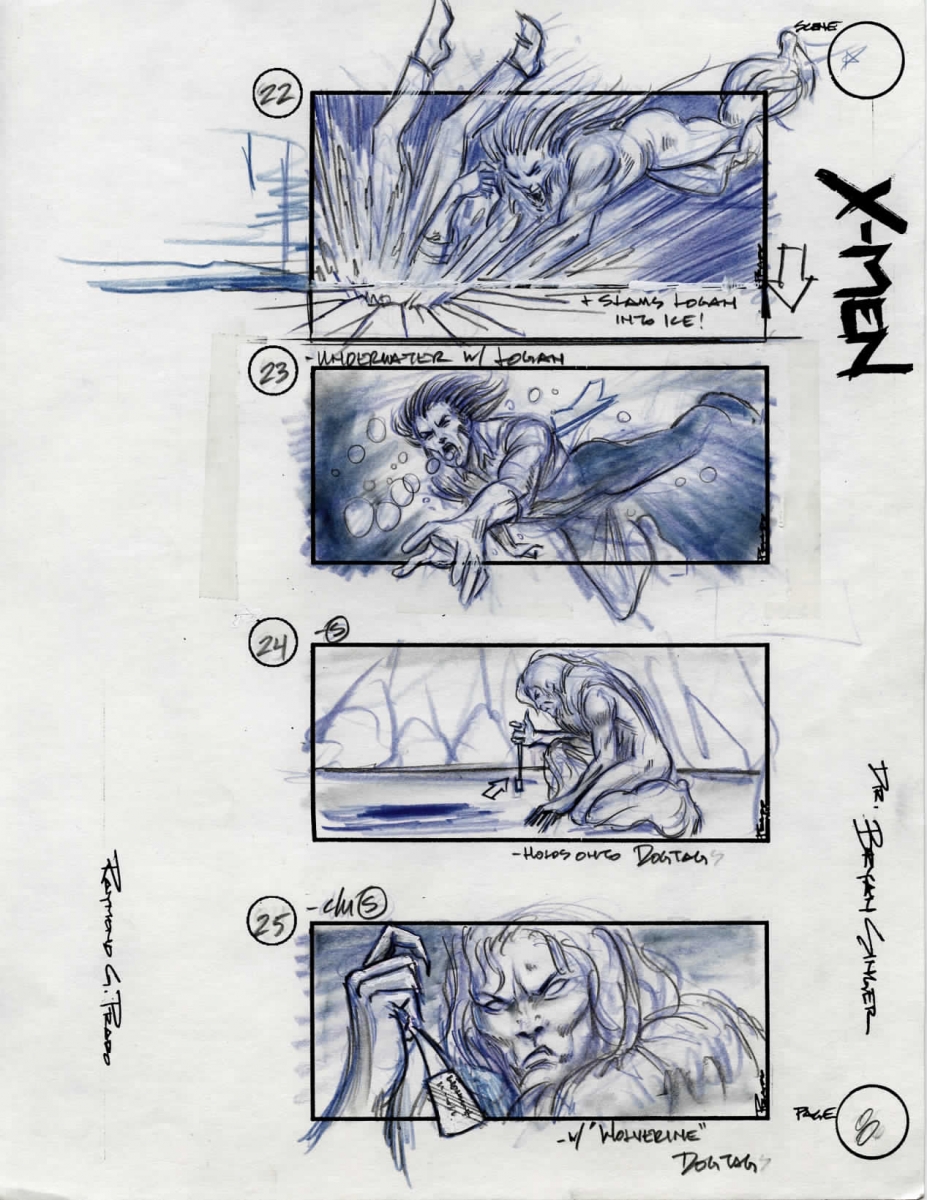 “I had this firm idea for years of what Wolverine of X-Men is: a short ball of rage,” says Prado. “Then in walks tall, charming, handsome Hugh Jackman and I thought ‘Oh no, this project is doomed.’ But it all made sense as soon as he put on the claws and scowled at the camera the first day.”

Sitting in the kitchen of the couple’s 1794 farmhouse, which back in the day was a tavern and stagecoach stop, it’s easy to feel at home. Gesine, who ran her own pastry shop in Montpelier, Vermont, for five years, now teaches out of her commercial baking space on the other side of the house and is writing her fifth cookbook. She’s just taken the ultimate blueberry pie out of the oven, while her husband whips up a couple of cappuccinos so pretty they belong on a coffee fetish Instagram feed. Their dogs Ruthie and Tallulah compete for head scratches as Prado answers questions about his work. Or tries to.

“My job is so weird,” he says. “It’s a mystery how we do it, and I don’t even know how. I’m also reluctant to talk about it because I don’t know if people should really know how some movies are being made now.”

When he started in the business, Prado says, he always worked from a script, but now, with big, booming action movies churned out to attract international audiences, Prado is sometimes handed rough ideas for some action scenes and has to “realize it all in drawing form.” He and a team will create what’s essentially an animated movie, and a writer will create a screenplay around it before it’s shot with actors. “Today it’s basically a lot of silent movies that are getting made,” he says. “Mostly action, some plot, not much dialogue.”

In between those big box office productions, though, are fulfilling projects such as Wormwood, a part-documentary, part-dramatic series he’s working on for Oscar-winning documentarian Errol Morris. Prado also does a lot of second unit directing now. (To save time and money, a director will often use a second crew to film certain scenes.) Prado has called some of the shots in Dodgeball, Two Weeks Notice, The Proposal and many of Hackford’s films.

For Ray,  the 2004 Oscar-nominated Ray Charles biopic that won actor Jamie Foxx an Academy Award, Prado earned further praise from Hackford: “He brought back better footage than I imagined. He is one of the few people I trust to go out and shoot what my vision is and what I really love and approve. There’s a sequence where Ray Charles is coming off drugs cold turkey, and 60 to 70 percent of those images were shot by Ray. He’s a director in his own right.”

Directing isn’t all he really wants to do. At any given moment Prado has his finger in more than one pie (although he’s wise enough to leave the baking in Gesine’s  expert hands). He’s also a gifted painter and currently working on a portrait of Frank Olson, a Cold War-era bacteriologist who is the subject of Morris’ Wormwood, which airs on Netflix this year. “This particular project got in my head, especially since this was a real man,” says Prado, who works at home from his second-floor office and has an easel set up next to the computers and tablets he uses to create illustrations. (He stopped using paper in 2002.) “Painting unlocks other imagery I incorporate into the storyboards. But I also do it to keep me from burning out and to stay relaxed and creative.”

His latest hobby is sewing, a skill he recently taught himself. He picked a replica of Adam West’s 1966 Batman costume for his first project. Prado’s can-do nature has made him a superhero at home, where he will find a way to solve any issue, whether it’s an IT glitch or a leaky roof. “I call him ‘Capability Ray’ because whenever he can make or fix something on his own, he’ll do it,” says Gesine, who often joins in on home projects. Together they’ve remodeled a bathroom and built a fence for their property. “He makes room in his soul for a lot of things.”

“Ever since I was a kid I wanted to make movies.”

Growing up in Denver, Prado, whose mother was born in a Japanese internment camp and whose father is of Native American and Chicano descent, remembers always being good at drawing. “I never thought it could turn into a career,” he says. A football recruit and member of Beta, he was always uneasy with his artsy side, perhaps because it didn’t quite jibe with his jock image, but he did leave his creative mark on campus. He drew illustrations for the football game programs, acted as art editor for the Stonefence Review and won a T-shirt design contest for Winter Carnival one year. “He was always drawing something,” says Prado’s freshman and sophomore year roommate Dan Parish ’89, who remains a close friend and directs alumni programming at the College. Parish recalls walking into Fayerweather one day to find Prado going all Orozco on their dorm room wall. “First he drew this really cool sketch of Batman, then he started adding other superheroes,” Parish says of his pal (who clearly has a fondness for the Caped Crusader). “It turned into this amazing mural by the time we moved out.” The artist’s favorite piece on campus, however, was a Wolverine mural at Beta (he’d later draw the same character for X-Men).

Prado knew he needed a job after graduation, so he went through the campus corporate recruiting program, but his heart was in filmmaking. Once he moved to L.A. in 1990, he just wandered onto studio lots to see if he could find work. His first job was as an illustration assistant on Marvel’s animated series Kid ’n Play, based on the teenage hip hop duo of the same name. “They looked at me and said, ‘Do you know anything about rap music?’ ” he says. “I think they just hired me because I was young.”

Sketching page after page in his office all day can be a lonely job, says Prado, 49, but now able to choose projects he wants to work on, content in a happy marriage, living in a beautiful home and on location just enough to not feel isolated, he knows he’s got it good. “It feels like I’m bragging, but I’m the luckiest guy in the world,” he says.

Maybe that’s why he’s gearing up to roll some creative dice and perhaps helm his own project soon. “I’ve always been safe hiding behind other filmmakers and whispering in their ears that they should try this or that, but I’ve never put myself out there and made one myself. I need to do my own thing at some point. A comic book at least!” he says. “As you get older, time flies. And you don’t want it to run out.”

Jennifer Wulff is a frequent contributer to DAM. A former People writer, she lives in Wilton, Connecticut.