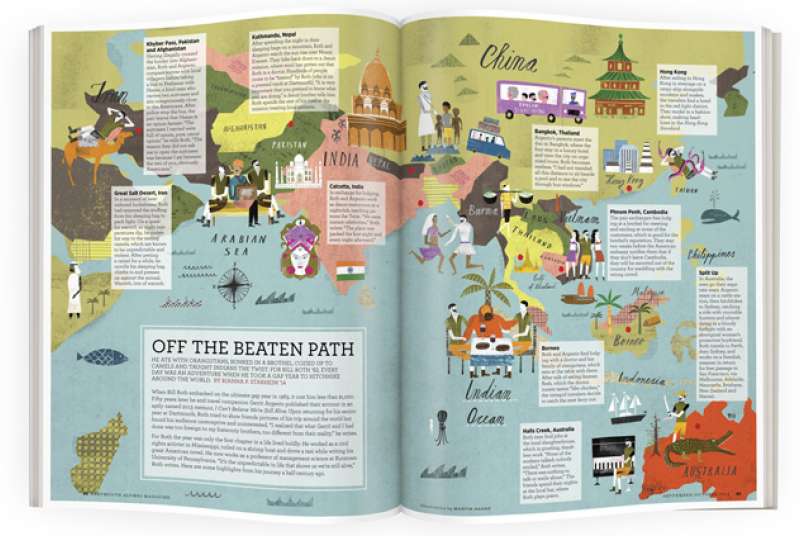 Off the Beaten Path

He ate with orangutans, bunked in a brothel, cozied up to camels and taught Indians the Twist. For Bill Roth ’62, every day was an adventure when he took a gap year to hitchhike around the world.
Rianna P. Starheim ’14 | Sept - Oct 2014

When Bill Roth embarked on the ultimate gap year in 1963, it cost him less than $1,000. Fifty years later he and travel companion Gerrit Argento published their account in an aptly named 2013 memoir, I Can’t Believe We’re Still Alive. Upon returning for his senior year at Dartmouth, Roth tried to show friends pictures of his trip around the world but found his audience unreceptive and uninterested. “I realized that what Gerrit and I had done was too foreign to my fraternity brothers, too different from their reality,” he writes.

For Roth the year was only the first chapter in a life lived boldly: He worked as a civil rights activist in Mississippi, toiled on a shrimp boat and drove a taxi while writing his great American novel. He now works as a professor of management science at Kutztown University of Pennsylvania. “It’s the unpredictable in life that shows us we’re still alive,” Roth writes. Here are some highlights from his journey a half-century ago.

Great Salt Desert, Iran
In a moment of heat-induced foolishness, Roth had removed the stuffing from his sleeping bag to pack light. On a quest for warmth as night temperatures dip, he makes his way to the resting camels, which are known to be unpredictable and violent. After petting a camel for a while, he unrolls his sleeping bag, climbs in and presses up against the animal. Warmth, lots of warmth.

Khyber Pass, Pakistan and Afghanistan
Having illegally crossed the border into Afghanistan, Roth and Argento compare knives with local villagers before taking a bus to Peshawar with Hasan, a kind man who carries two suitcases and sits conspicuously close to the Americans. After police stop the bus, the pair learns that Hasan is an opium farmer: “The suitcases I carried were full of opium, pure, uncut opium,” he tells Roth. “The reason they did not ask me to open the suitcases was because I sat between the two of you, obviously Americans.”

Kathmandu, Nepal
After spending the night in their sleeping bags on a mountain, Roth and Argento watch the sun rise over Mount Everest. They hike back down to a Jesuit mission, where word has gotten out that Roth is a doctor. Hundreds of people come to be “treated” by Roth (who is on a premed track at Dartmouth). “It is very important that you pretend to know what you are doing,” a Jesuit brother tells him. Roth spends the rest of his time at the mission treating local patients.

Calcutta, India
In exchange for lodging, Roth and Argento work as dance instructors at a nightclub, teaching patrons the Twist. “We were instant celebrities,” Roth writes. “The place was packed the first night and every night afterward.”

Bangkok, Thailand
Argento’s parents meet the duo in Bangkok, where the four stay in a luxury hotel and view the city on organized tours. Roth becomes restless: “I had not traveled all this distance to sit beside a pool and to see the city through bus windows.”

Hong Kong
After sailing to Hong Kong in steerage on a cargo ship alongside monkeys and snakes, the travelers find a hotel in the red-light district. They model in a fashion show, making headlines in the Hong Kong Standard.

Phnom Penh, Cambodia
The pair exchanges free lodging at a brothel for meeting and smiling at some of the customers, which is good for the brothel’s reputation. They stay two weeks before the American embassy notifies them that if they don’t leave Cambodia, they will be escorted out of the country for meddling with the wrong crowd.

Borneo
Roth and Argento find lodging with a doctor and his family of orangutans, which eats at the table with them. After talk of eating human flesh, which the doctor insists tastes “like chicken,” the intrepid travelers decide to catch the next ferry out.

Halls Creek, Australia
Both men find jobs at the local slaughterhouse, which is grueling, thankless work. “None of the workers talked; nobody smiled,” Roth writes. “There was nothing to talk or smile about.” The friends spend their nights at the local bar, where Roth plays piano.

Split Up
In Australia, the men go their separate ways. Argento stays on a cattle station, then hitchhikes to Sydney, catching a ride with crocodile hunters and almost dying in a bloody fistfight with an aboriginal woman’s protective boyfriend. Roth travels to Perth, then Sydney, and works on a Swedish steamer in return for free passage to San Francisco, via Melbourne, Adelaide, Newcastle, Brisbane, New Zealand and Hawaii.