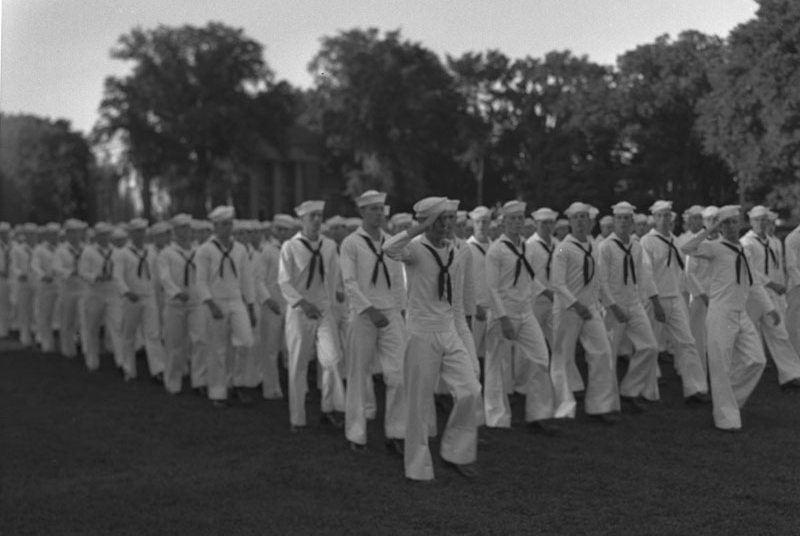 Training for War at Dartmouth

I joined the Marine Corps when I turned 18 in February 1943 and was allowed to finish high school. Had I not done so, I would have been drafted and in February called into the service. I had been accepted into the Dartmouth class of 1947 when the Navy V-12 program was announced at Dartmouth and we were all put into uniform.

V-12 was developed by the U.S. Navy—with help from Dartmouth President Ernest Hopkins—as a way to combine college education with military service. Dartmouth received about 2,000 participants, the largest number of any of the 130 colleges that had V-12 programs. The draft had been in effect for some time, and thus the new freshman class of 1947 numbered just 87 civilians, all under 18 years old. Sophomore and junior students were almost nonexistent, as most had gone to war. The College might have closed were it not for the influx of V-12 “students.”

So, in 1943 about 2,000 young men descended upon Hanover, and within two days all were in Navy or Marine uniforms, earning $50 per month. The freshman class suddenly had 547 naval officers in training and 119 Marine Corps candidates. Upperclassmen from Dartmouth and other colleges totaled more than 1,300 students. They had come from everywhere: Harvard, Yale, Brown, Columbia, NYU, Middlebury, CCNY, Boston College, and Villanova, to list a few.

The College was in charge of the classroom and the Navy was in charge of the gym. To make officers from these men, different courses had to be taught. English professors now had to teach map reading and history teachers had to teach physics. It was quite a wrench. And the V-12 students had to learn a new language: A dormitory is now a ship, College Hall is now a flagship, Dick’s House is now a hospital ship, a stairway is a ladder, a window is a port, a toilet is a head, a drinking fountain is now a scuttlebut, entrance steps are now a gangway, and, of course, the flagship’s main deck is directly inboard of the gangway!

As an 18-year old Marine arriving in July 1943, I was assigned “ship” #101 in Topliff Hall, which I shared with a Dartmouth junior, a Middlebury sophomore, and a Marine from the fleet. We had two rooms, two bunk beds, four desks and chairs, two bureaus, and one closet, and the space was inspected every day for cleanliness! The bathroom for half the floor was another story. But we all survived the 6 a.m. wake-up bugle, falling into formation on the street at 6:30, exercising for 30 minutes, rain or shine, snow, sleet or hail, and marching to chow. Back to the dorm and off to class, five days a week. Weekends were free, but no vehicles were allowed on campus, gas rationing was in effect, thumbing for a ride was against Navy regs, and the nearest women’s college was Colby Junior, 30 miles away. All kinds of sports activities were taking place against other colleges, which helped a lot.

The East Coast of the United States went into blackout mode at night because of the fear of German bombers. So all shades were drawn in every building. The side benefit in Topliff was that poker games on the second floor could go on all night and not be noticed by the noncommissioned officers patrolling the grounds.

We could be called from Dartmouth whenever the Marine Corp or Navy wanted men for training to become officers. In my case, I eventually was called, went to Parris Island, was commissioned at Quantico, and was preparing for the invasion of Japan when the war ended.

The College survived and the V-12 program ended in May 1945. Almost 50 years later, in 1993, a reunion was held celebrating that event, but that would be the subject for another story, as almost 450 people came and the stories of their experiences flowed.