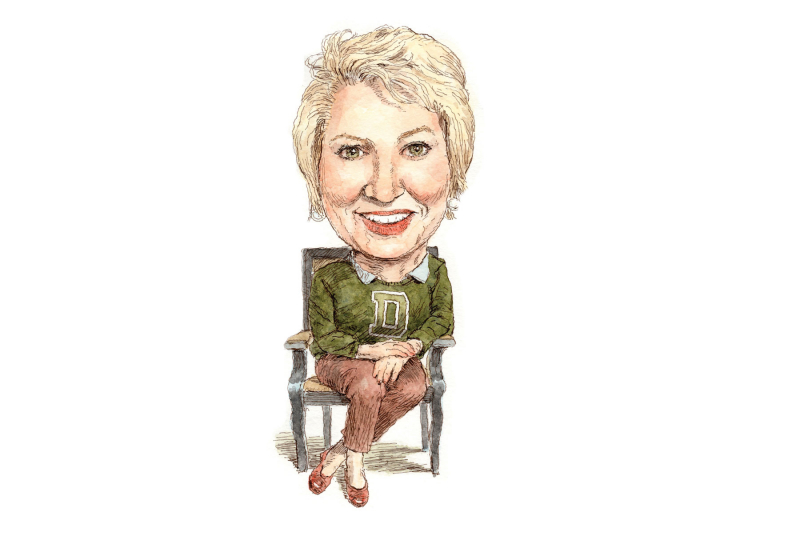 Notable: Award-winning healthcare journalist and first woman nominated by alumni to College’s board of trustees (1993); named chair of the board in 2001; elected member, National Academy of Medicine and Council on Foreign Relations

“I applied for early admission, when women from the first fully coed class had been on campus only a couple of months. There was a sense of exhilaration, of ‘Isn’t this amazing?’ It felt like being an astronaut on a spacewalk.”

“In one sense, going to Dartmouth was my last-ditch act of adolescent rebellion. There was a little bit of family pressure to go to Yale. My guidance counselor wanted me to aim for Harvard. When I visited a friend at Dartmouth, I had the same reaction as Dwight Eisenhower: ‘This is what a college campus ought to look like.’ Everyone seemed happy to be there.”

“People may feel that women were destined to be at Dartmouth, but it wasn’t an historical inevitability. The night before the trustees’ vote to admit women, President John Kemeny didn’t even know if the resolution would pass.”

“The majority of students and alumni were in favor of coeducation, but the loudest voices were the people opposed—people who were antagonistic toward the College or the administration or other people in general.”

“Those of us in the first few coed classes were surprised by the pushback we received. Women got used to waking up to choruses of drunken men singing outside their dorms at night. An April 1 joke issue of The D ‘reported’ that the trustees had revoked their vote in favor of coeducation and that female students in North Mass had gone on a rampage. Such a vote didn’t seem implausible in those fraught times.”

“After the class of 1975 graduated, things really began to change, because there was no one on campus who had arrived with the expectation of an all-male campus. There were also more female faculty and staff. There was an enormous amount of bonding between female faculty members and female students.”

“When I was first asked to run for the board, I said, ‘I’m not going to be elected, so why put myself through the humiliation?’ After getting a lot of pressure, I thought, ‘Somebody’s got to be the sacrificial lamb, the first woman to run and be defeated. That’s my fate.’ Winning was a surprise. I think women were so happy to see a woman on the ballot they voted only for me.”

“You can’t be 100 percent prepared to be a trustee until you’ve sat in a board seat debating contentious issues. Even then you can be on a board with minimal involvement. It’s when you’re a board chair that you learn the most about institutional governance.”

“Although the world wouldn’t go to hell if the option went away, I think there is a place for single-sex education. As we know, the ‘bro culture’ is, regrettably, alive and well throughout much of society. I understand that some young women might feel more comfortable and might learn better in a single-sex setting.”

“I’d be shocked if the next president of Dartmouth is not a woman. It’s time.”