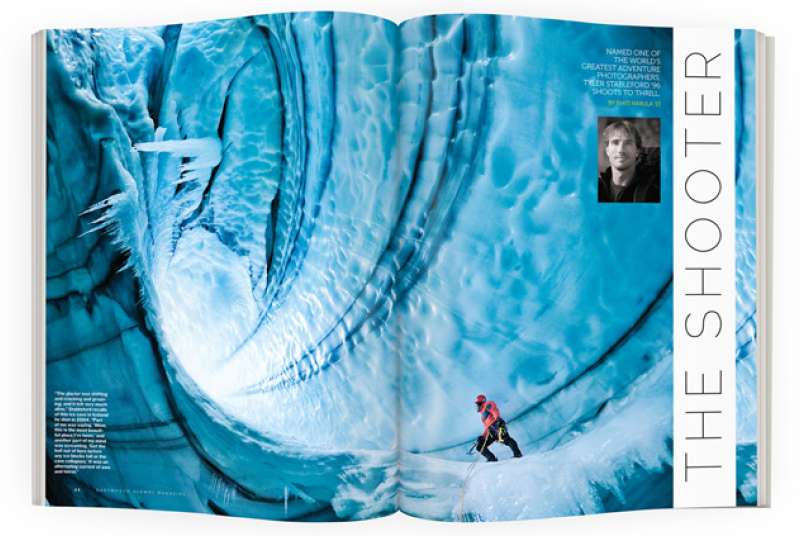 Tyler Stableford is no stranger to air travel. One of today’s top adventure photographers, he makes a living flying around the world to shoot in its most extreme environments. Yet it was no commercial flight he took for an assignment in 2009, when he stepped into the backseat of an F16 fighter jet to capture Colorado’s Air National Guard pilots in action. “Right after takeoff we hit seven and a half G-forces. I almost blacked out,” he says. “I was trying to look through a camera viewfinder that I had no control over and it required a lot just to keep from getting motion sickness.” Stableford’s 90 minutes of loops and dives in the sky resulted in several award-winning photos, including a larger-than-life, upside-down self-portrait.

If the process were any easier, it wouldn’t be as fun. “What I most enjoy doing as a photographer is trying to create good imagery in challenging situations,” he says. “I’m kind of a lifelong rock climber and for me, as a climber and also as a photographer, the point is to find a flow state and to find grace under pressure.”

Loving a challenge also explains his seamless shift to filmmaking in recent years. “The creation of images and particularly filmmaking itself is incredibly cerebral, and I find that really gratifying,” says Stableford. “It’s not just about taking six shots of somebody. There’s so much interviewing, scripting and writing. It returns me to my roots as an English major and a storyteller.”

For Stableford, whose home base is Carbondale, Colorado, a mecca for athletes and outdoor enthusiasts, living adventurously is the key to awesome photo opportunities. One of his most successful photographs was born from a recreational excursion to the canyons of Utah in 2007. Another noteworthy shot was the result of camping overnight in subfreezing temperatures on a glacier in Iceland, rising in the morning to gamely venture into a cavernous black hole in the ice. The reward for that risk was ending up in a vaulted, light-filled space with spirals of bright blue ice, which Stableford scaled after capturing a stunning image of one of his companions ascending before him.

Creating art in natural settings can be tricky sometimes due to uncontrollable conditions, but Stableford articulates the flipside of that nicely: “It’s only by committing to the process of being out there that you get some of those magical moments that are better than anything you could have planned.”

Patience, a sense of adventure and a willingness to embrace challenges are what help Stableford get his pictures, but his passion for storytelling is what brings meaning to them.

“My goal is to share human stories with people and, I hope, give them a new way of looking at the world with their own photography,” he says. To that end he has committed his time and energy to at least one pro bono shoot per year, with the goal of creating effective marketing campaigns for causes he believes in. Stableford’s first such project raised $300,000 for Wide Horizons For Children, a humanitarian aid organization through which he and wife Megan Currier ’97 adopted a son from Ethiopia in 2009. “It’s way better for me to spend my volunteer time with a camera in my hand than a hammer or a shovel.”

Svati Narula is a DAM intern and a government major.