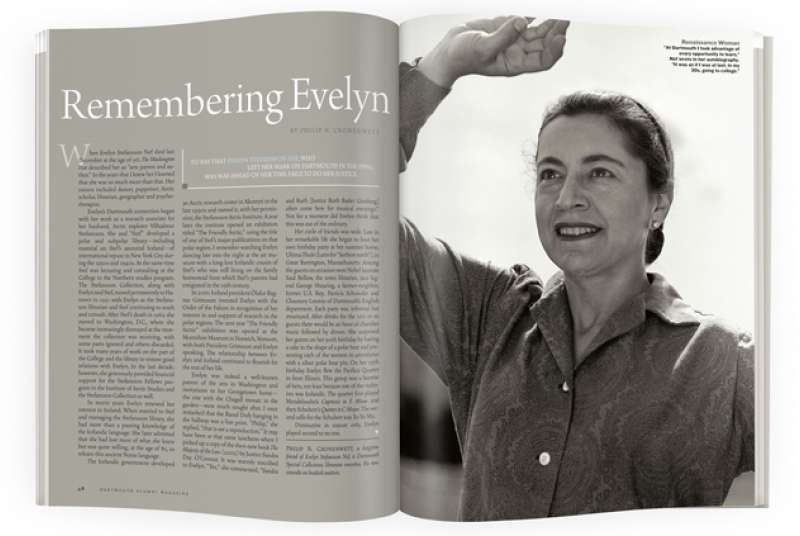 To say that Evelyn Stefansson Nef, who left her mark on Dartmouth in the 1950s, was way ahead of her time fails to do her justice.
Philip N. Cronenwett | Mar - Apr 2010

When Evelyn Stefansson Nef died last December at the age of 96, The Washington Post described her as “arts patron and author.” In the years that I knew her I learned that she was so much more than that. Her careers included dancer, puppeteer, Arctic scholar, librarian, geographer and psychotherapist.

Evelyn’s Dartmouth connection began with her work as a research associate for her husband, Arctic explorer Vilhjalmur Stefansson. She and “Stef” developed a polar and subpolar library—including material on Stef’s ancestral Iceland—of international repute in New York City during the 1930s and 1940s. At the same time Stef was lecturing and consulting at the College in the Northern studies program. The Stefansson Collection, along with Evelyn and Stef, moved permanently to Hanover in 1951 with Evelyn as the Stefansson librarian and Stef continuing to teach and consult. After Stef’s death in 1962 she moved to Washington, D.C., where she became increasingly dismayed at the treatment the collection was receiving, with some parts ignored and others discarded. It took many years of work on the part of the College and the library to restore good relations with Evelyn. In the last decade, however, she generously provided financial support for the Stefansson Fellows program in the Institute of Arctic Studies and the Stefansson Collection as well.

In recent years Evelyn renewed her interest in Iceland. When married to Stef and managing the Stefansson library, she had more than a passing knowledge of the Icelandic language. She later admitted that she had lost most of what she knew but was quite willing, at the age of 85, to relearn this ancient Norse language.

The Icelandic government developed an Arctic research center in Akureyri in the late 1990s and named it, with her permission, the Stefansson Arctic Institute. A year later the institute opened an exhibition titled “The Friendly Arctic,” using the title of one of Stef’s major publications on that polar region. I remember watching Evelyn dancing late into the night at the art museum with a long-lost Icelandic cousin of Stef’s who was still living on the family homestead from which Stef’s parents had emigrated in the 19th century.

In 2001 Iceland president Ólafur Ragnar Grímsson invested Evelyn with the Order of the Falcon in recognition of her interest in and support of research in the polar regions. The next year “The Friendly Arctic” exhibition was opened at the Montshire Museum in Norwich, Vermont, with both President Grímsson and Evelyn speaking. The relationship between Evelyn and Iceland continued to flourish for the rest of her life.

Evelyn was indeed a well-known patron of the arts in Washington and invitations to her Georgetown home—the one with the Chagall mosaic in the garden—were much sought after. I once remarked that the Raoul Dufy hanging in the hallway was a fine print. “Philip,” she replied, “that is not a reproduction.” It may have been at that same luncheon where I picked up a copy of the then-new book The Majesty of the Law (2003) by Justice Sandra Day O’Connor. It was warmly inscribed to Evelyn. “Yes,” she commented, “Sandra and Ruth [Justice Ruth Bader Ginsberg] often come here for musical evenings.” Not for a moment did Evelyn think that this was out of the ordinary.

Her circle of friends was wide. Late in her remarkable life she began to host her own birthday party at her summer home, Ultima Thule (Latin for “farthest north”), in Great Barrington, Massachusetts. Among the guests on occasion were Nobel laureate Saul Bellow, the town librarian, jazz legend George Shearing, a farmer-neighbor, former U.S. Rep. Patricia Schroeder and Chauncey Loomis of Dartmouth’s English department. Each party was informal but structured. After drinks for the 100 or so guests there would be an hour of chamber music followed by dinner. She surprised her guests on her 90th birthday by having a cake in the shape of a polar bear and presenting each of the women in attendance with a silver polar bear pin. On her 95th birthday Evelyn flew the Pacifica Quartet in from Illinois. This group was a favorite of hers, not least because one of the violinists was Icelandic. The quartet first played Mendelssohn’s Capriccio in E Minor and then Schubert’s Quintet in C Major. The second cello for the Schubert was Yo-Yo Ma.

Diminutive in stature only, Evelyn played second to no one.