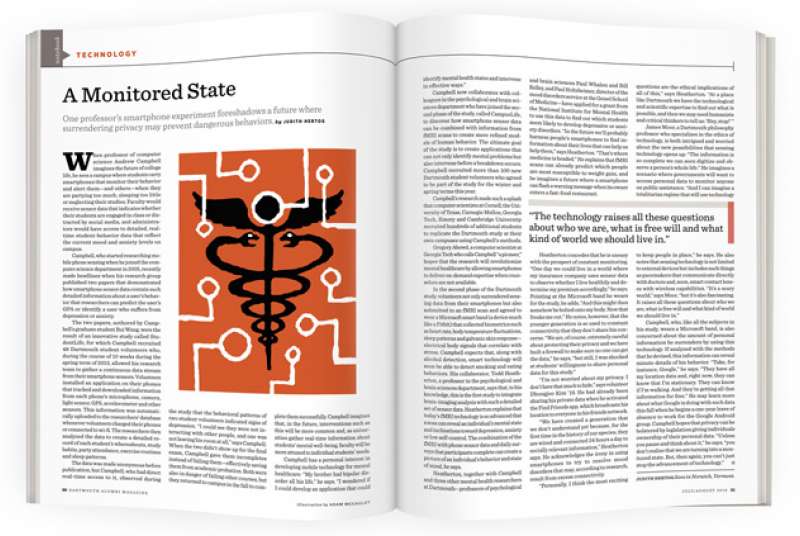 When professor of computer science Andrew Campbell imagines the future of college life, he sees a campus where students carry smartphones that monitor their behavior and alert them—and others—when they are partying too much, sleeping too little or neglecting their studies. Faculty would receive sensor data that indicates whether their students are engaged in class or distracted by social media, and administrators would have access to detailed, real-time student-behavior data that reflect the current mood and anxiety levels on campus.

Campbell, who started researching mobile phone sensing when he joined the computer science department in 2005, recently made headlines when his research group published two papers that demonstrated how smartphone sensor data contain such detailed information about a user’s behavior that researchers can predict the user’s GPA or identify a user who suffers from depression or anxiety.

The two papers, authored by Campbell’s graduate student Rui Wang, were the result of an innovative study called StudentLife, for which Campbell recruited 48 Dartmouth student volunteers who, during the course of 10 weeks during the spring term of 2013, allowed his research team to gather a continuous data stream from their smartphone sensors. Volunteers installed an application on their phones that tracked and downloaded information from each phone’s microphone, camera, light sensor, GPS, accelerometer and other sensors. This information was automatically uploaded to the researchers’ database whenever volunteers charged their phones or connected to wi-fi. The researchers then analyzed the data to create a detailed record of each student’s whereabouts, study habits, party attendance, exercise routines and sleep patterns.

The data was made anonymous before publication, but Campbell, who had direct real-time access to it, observed during the study that the behavioral patterns of two student volunteers indicated signs of depression. “I could see they were not interacting with other people, and one was not leaving his room at all,” says Campbell. When the two didn’t show up for the final exam, Campbell gave them incompletes instead of failing them—effectively saving them from academic probation. Both were also in danger of failing other courses, but they returned to campus in the fall to complete them successfully. Campbell imagines that, in the future, interventions such as this will be more common and, as universities gather real-time information about students’ mental well-being, faculty will be more attuned to individual students’ needs.

Campbell has a personal interest in developing mobile technology for mental healthcare: “My brother had bipolar disorder all his life,” he says. “I wondered if I could develop an application that could identify mental health states and intervene in effective ways.”

Campbell now collaborates with colleagues in the psychological and brain sciences department who have joined the second phase of the study, called CampusLife, to discover how smartphone sensor data can be combined with information from fMRI scans to create more refined models of human behavior. The ultimate goal of the study is to create applications that can not only identify mental problems but also intervene before a breakdown occurs. Campbell recruited more than 100 new Dartmouth student volunteers who agreed to be part of the study for the winter and spring terms this year.

Campbell’s research made such a splash that computer scientists at Cornell, the University of Texas, Carnegie Mellon, Georgia Tech, Emory and Cambridge University recruited hundreds of additional students to replicate the Dartmouth study at their own campuses using Campbell’s methods.

Gregory Abowd, a computer scientist at Georgia Tech who calls Campbell “a pioneer,” hopes that the research will revolutionize mental healthcare by allowing smartphones to deliver on-demand expertise when counselors are not available.

In the second phase of the Dartmouth study, volunteers not only surrendered sensing data from their smartphones but also submitted to an fMRI scan and agreed to wear a Microsoft smart band (a device much like a Fitbit) that collected biometrics such as heart rate, body temperature fluctuations, sleep patterns and galvanic skin response—electrical body signals that correlate with stress. Campbell expects that, along with alcohol detection, smart technology will soon be able to detect smoking and eating behaviors. His collaborator, Todd Heatherton, a professor in the psychological and brain sciences department, says that, to his knowledge, this is the first study to integrate brain-imaging analysis with such a detailed set of sensor data. Heatherton explains that today’s fMRI technology is so advanced that a scan can reveal an individual’s mental state and inclinations toward depression, anxiety or low self-control. The combination of the fMRI with phone sensor data and daily surveys that participants complete can create a picture of an individual’s behavior and state of mind, he says.

Heatherton, together with Campbell and three other mental health researchers at Dartmouth—professors of psychological and brain sciences Paul Whalen and Bill Kelley, and Paul Holtzheimer, director of the mood disorders service at the Geisel School of Medicine—have applied for a grant from the National Institute for Mental Health to use this data to find out which students seem likely to develop depressive or anxiety disorders. “In the future we’ll probably harness people’s smartphones to find information about their lives that can help us help them,” says Heatherton. “That’s where medicine is headed.” He explains that fMRI scans can already predict which people are most susceptible to weight gain, and he imagines a future where a smartphone can flash a warning message when its owner enters a fast-food restaurant.

Heatherton concedes that he is uneasy with the prospect of constant monitoring. “One day we could live in a world where my insurance company uses sensor data to observe whether I live healthily and determine my premium accordingly,” he says. Pointing at the Microsoft band he wears for the study, he adds, “And this might then somehow be bolted onto my body. Now that freaks me out.” He notes, however, that the younger generation is so used to constant connectivity that they don’t share his concerns. “We are, of course, extremely careful about protecting their privacy and we have built a firewall to make sure no one can get the data,” he says, “but still, I was shocked at students’ willingness to share personal data for this study.”

“I’m not worried about my privacy. I don’t have that much to hide,” says volunteer Dhungjoo Kim ’19. He had already been sharing his private data when he activated the Find Friends app, which broadcasts his location to everyone in his friends network.

“We have created a generation that we don’t understand yet because, for the first time in the history of our species, they are wired and connected 24 hours a day to socially relevant information,” Heatherton says. He acknowledges the irony in using smartphones to try to resolve mood disorders that may, according to research, result from excess connectivity.

“Personally, I think the most exciting questions are the ethical implications of all of this,” says Heatherton. “At a place like Dartmouth we have the technological and scientific expertise to find out what is possible, and then we may need humanists and critical thinkers to tell us: ‘Hey, stop!’ ”

James Moor, a Dartmouth philosophy professor who specializes in the ethics of technology, is both intrigued and worried about the new possibilities that sensing technology opens up: “The information is so complete we can soon digitize and observe a person’s whole life.” He imagines a scenario where governments will want to access personal data to monitor anyone on public assistance. “And I can imagine a totalitarian regime that will use technology to keep people in place,” he says. He also notes that sensing technology is not limited to external devices but includes such things as pacemakers that communicate directly with doctors and, soon, smart contact lenses with wireless capabilities. “It’s a scary world,” says Moor, “but it’s also fascinating. It raises all these questions about who we are, what is free will and what kind of world we should live in.”

Campbell, who, like all the subjects in his study, wears a Microsoft band, is also concerned about the amount of personal information he surrenders by using this technology. If analyzed with the methods that he devised, this information can reveal minute details of his behavior. “Take, for instance, Google,” he says. “They have all my location data and, right now, they can know that I’m stationary. They can know if I’m walking. And they’re getting all that information for free.” He may learn more about what Google is doing with such data this fall when he begins a one-year leave of absence to work for the Google Android group. Campbell hopes that privacy can be bolstered by legislation giving individuals ownership of their personal data. “Unless you pause and think about it,” he says, “you don’t realize that we are turning into a monitored state. But, then again, you can’t just stop the advancement of technology.”