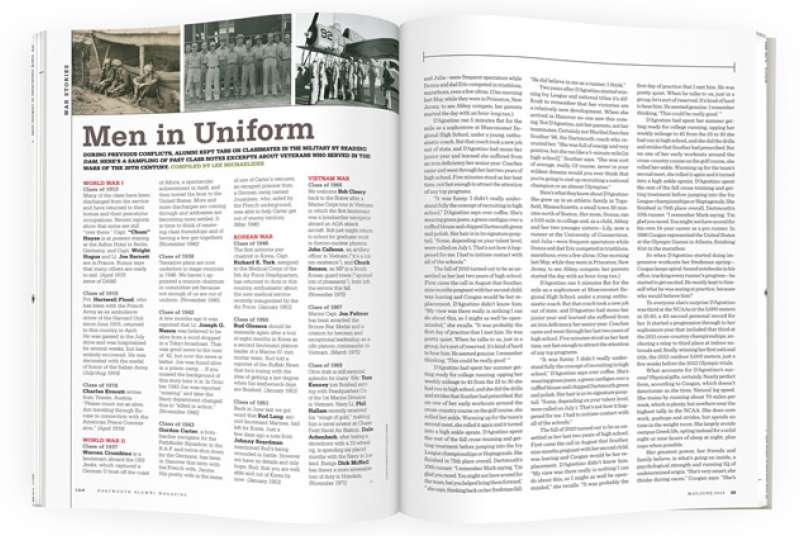 Class Notes excerpts about veterans who served in the wars of the 20th century.
Lee Michaelides | Sept - Oct 2012

World War I
Class of 1913
Many of the class have been discharged from the service and have returned to their homes and their peacetime occupations. Recent reports show that some are still “over there.” Capt. “Chum” Hayes is at present staying at the Adlon Hotel in Berlin, Germany, and Capt. Wright Hugus and Lt. Joe Barnett are in France. Rumor says that many others are ready to sail. (April 1919 issue of DAM)

Class of 1915
Pvt. Hartwell Flood, who has been with the French Army as an ambulance driver of the Harvard Unit since June 1916, returned to this country in April. He was gassed in the July drive and was hospitalized for several weeks, but has entirely recovered. He was decorated with the medal of honor of the Italian Army. (July/Aug 1919)

Class of 1916
Charles Everett writes from Trieste, Austria: “Please count me as alive. Am traveling through Europe in connection with the American Peace Commission.” (April 1919)

World War II
Class of 1937
Warren Crumbine is a lieutenant aboard the USS Jenks, which captured a German U-boat off the coast of Africa, a spectacular achievement in itself, and then towed the boat to the United States. More and more discharges are coming through and addresses are becoming more settled. It is time to think of renewing class friendships and of having a few get-togethers. (November 1945)

Class of 1938
Tentative plans are now underfoot to stage reunions in 1946. We haven’t appointed a reunion chairman or committee yet because not enough of us are out of uniform. (November 1945)

Class of 1942
A few months ago it was reported that Lt. Joseph G. Nason was believed to be alive from a word dropped in a Tokyo broadcast. That was good news to the men of ’42, but now the news is better. Joe was found alive in a prison camp….If you missed the background of this story here it is. In October 1943 Joe was reported “missing” and later the Navy department changed this to “killed in action.” (November 1945)

Class of 1943
Gordon Carter, a bombardier navigator for the Pathfinder Squadron in the R.A.F. and twice shot down by the Germans, has been in Hanover this term with his French wife, Janine. His pretty wife is the sister of one of Carter’s rescuers, an escaped prisoner from a German camp named Jouanjean, who, aided by the French underground, was able to help Carter get out of enemy territory. (May 1946)

Korean War
Class of 1946
The first airborne psychiatrist in Korea, Capt. Richard E. Turk, assigned to the Medical Corps of the 5th Air Force Headquarters, has returned to duty in this country, enthusiastic about the new medical service recently inaugurated by the Air Force. (January 1953)

Class of 1950
Bud Gleason should be stateside again after a tour of eight months in Korea as a second lieutenant platoon leader of a Marine 81-mm mortar team. Bud told a reporter of the Buffalo News that he’s toying with the idea of getting a law degree when his leatherneck days are finished. (January 1953)

Class of 1951
Back in June last we got word that Bud Lang, second lieutenant Marines, had left for Korea. Just a few days ago a note from Johnny Boardman mentioned Bud’s being wounded in battle. However we have no details and only hope, Bud, that you are well, able and out of Korea by now. (January 1953)

Vietnam War
Class of 1966
We welcome Bob Cleary back to the States after a Marine Corps tour in Vietnam in which the first lieutenant was a bombardier-navigator aboard an AGA attack aircraft. Bob just might return to school for graduate work in thermo-nuclear physics. John Calhoun, an artillery officer in Vietnam (“it’s a rotten existence”), and Chuck Benson, an MP in a South Korean guard tower (“spotted lots of pheasants”), both left the service this fall. (November 1970)

Class of 1967
Marine Capt. Jon Feltner has been awarded the Bronze Star Medal and a citation for heroism and exceptional leadership as a rifle platoon commander in Vietnam. (March 1975)

Class of 1969
Olive drab is still sartorial splendor for many ’69s: Tom Kenney just finished serving with Headquarters Co. of the 1st Marine Division in Vietnam. Navy Lt. Phil Hallam recently received his “wings of gold,” making him a naval aviator at Chase Field Naval Air Station. Dale Achenbach, after losing a showdown with a 10-wheel rig, is spending six placid months with the Navy in Iceland. Ensign Dick McNeil has drawn a more amenable tour of duty in Honolulu. (November 1971)