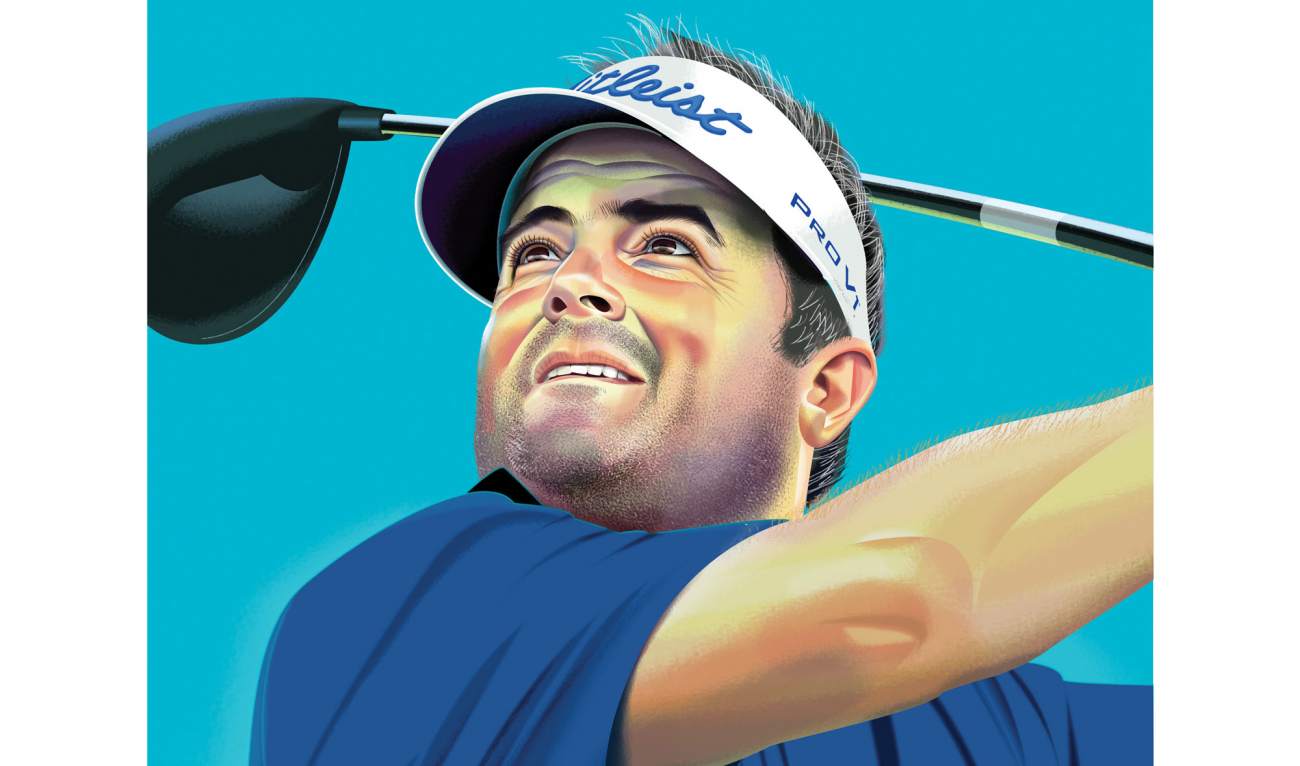 Jeronimo Esteve IV ’03 has defeated formidable foes, both on and off the golf course.
Mike Cullity | November-December 2022

Last March, Jeronimo Esteve IV found himself competing against some of the world’s best professional golfers, striding manicured fairways along the azure waters off the Dominican Republic in a PGA Tour tournament.

A graying soccer dad who sells cars for a living, the 41-year-old Orlando, Florida, resident is one of the country’s leading amateur golfers. He is also no stranger to adversity.

Esteve’s golf journey began in his native Puerto Rico, continued in Miami and later at Dartmouth, where he played on the men’s team and served as a senior captain. Esteve has made competitive golf a successful avocation while building a career and raising three sons with his wife, Maritere.

Much of that success has come since he beat cancer in 2011. Esteve suggests that his battle against Hodgkin’s lymphoma—he was diagnosed at age 29—fostered a mindset that has fueled his achievements. “It really made me love golf,” he says. “Golf became just so intertwined with my health and my well-being while I was going through treatment. It took my appreciation of the game, and my amateur career, to the next level.” For Esteve, the game is now as much about camaraderie and being outside in nature—and the tranquility it brings—as it is about competitiveness.

As an amateur, Esteve does not play for prize money. He competes across the country in invitational tournaments for amateurs 25 and older—“mid-amateurs” in golf parlance—and during the past two years has won four of them. He has won the amateur championships of Puerto Rico, the Dominican Republic, and the Caribbean, finished in the top 10 of the Latin America Amateur Championship, and competed in the British Amateur and World Amateur Team Championships. Esteve pays his own tournament and travel expenses.

His performance has earned him berths in three PGA Tour events—the Puerto Rico Open in 2015 and 2019 and the Corales Puntacana Championship in the Dominican Republic earlier this year. Cameo appearances on the PGA Tour are rare for any amateur, let alone an Ivy Leaguer who survived cancer—and whose father’s family fled Fidel Castro’s Cuba. 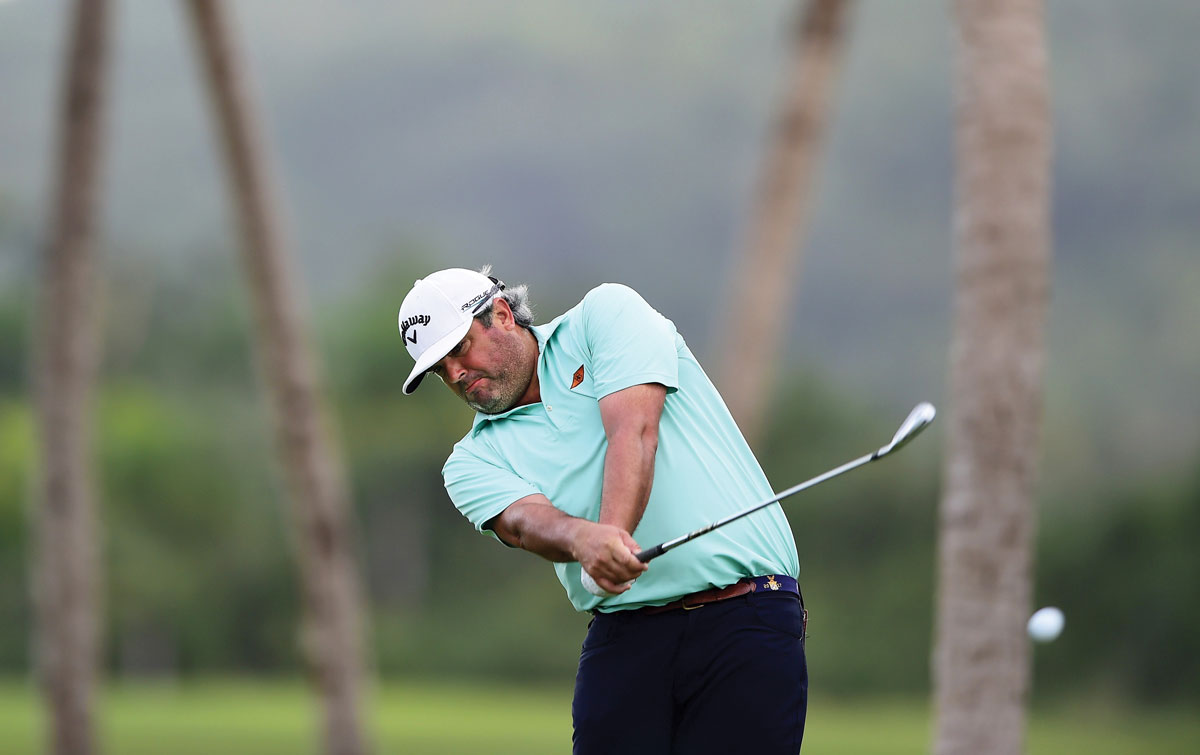 Esteve qualified for the 2011 U.S. Mid-Amateur when he was undergoing radiation treatment. In recent years he has hosted spring trips in Florida for both Dartmouth golf teams. (Photo: Jared C. Tilton/Getty Images)

Esteve’s great-grandfather, the first Jeronimo in the family line, was a prosperous entrepreneur in Cuba. After the family fled, Esteve’s grandfather, Jeronimo II, sold a hodgepodge of merchandise in Puerto Rico—items such as used jukeboxes, pool tables, appliances, and lawn mowers—and, eventually, Honda automobiles. Esteve’s father, Jeronimo III, who was 7 when the family left Cuba in 1959, grew up and later acquired a failing Toyota dealership in Miami. He moved his family—wife Yazmin and children Jeronimo IV, then 9, Yazmin, and Alexandra—to the mainland in 1990. During the ensuing three decades he built Headquarter Automotive, which today operates four Florida dealerships and ranks among the top 150 U.S.-operated dealership groups based on new vehicle sales by Automotive News.

Esteve, the company’s vice president, appreciates what his family and others who left Cuba have accomplished. “They left with almost nothing,” he says. “I think my grandmother had $50 that she stuffed in her bra, and that’s what they had to start off with. And man, they built a great business.”

Esteve’s father introduced Jeronimo IV to golf as a youngster. His dad befriended and arranged lessons with Juan “Chi Chi” Rodriguez, the colorful tour pro and first Puerto Rican inducted into the World Golf Hall of Fame. After moving to Miami, Esteve focused on other sports but gravitated back to golf in high school, joining the team at Belen Jesuit Preparatory School. He struggled at first but improved with help from his father and two instructors at the well-known Jim McLean Golf School at Miami’s Doral Resort.

Although he didn’t play many elite junior tournaments, Esteve drew notice from legendary Dartmouth coach Bill Johnson. His college highlights included being part of the squad that advanced to the NCAA East Regional Championship in 2000 and scoring two holes-in-one, one of them on the 14th hole (he used an 8-iron) at Hanover Country Club.

As a junior, Esteve played No. 2 behind senior Lee Birchall ’02, who had an inkling of his teammate’s potential. “I knew when we were playing that he was just really, really good and hadn’t even scratched the surface of his talent,” Birchall says.

After graduating, Esteve played professionally for nearly a year, competing on minor-league circuits in the United States and Latin America. He earned about $25,000 in prize money but fell short in qualifying tournaments for the PGA and European tours. The talent he observed among fellow competitors convinced him that he didn’t have what it takes to succeed at the highest level, he says. He had also begun courting Maritere, a Tufts student he had met a few years earlier, and decided that he didn’t want to pursue a pro golf career and a potential wife at the same time. “I knew I couldn’t chase both,” he says.

“Golf was my huge stress escape.”

Esteve joined his father in the car business in August 2004 and married Maritere, who gave birth to their first son, Jeronimo V (of course), in 2009. Two years later, while being fitted for a suit for his sister’s wedding, Esteve discovered an abnormal growth near his clavicle. He was diagnosed with stage-1 Hodgkin’s lymphoma. Esteve moved to Houston with his family for six months of chemotherapy and radiation at the acclaimed MD Anderson Cancer Center.

His doctor infused him with cancer-killing drugs via injection, rather than through a port in his chest, so that he could play during treatment. “I played a lot of golf, to be honest with you,” he says. “Golf was my huge stress escape.”

Remarkably, Esteve qualified for the 2011 U.S. Mid-Amateur Championship while undergoing radiation. He played 18 holes in the morning, left the course to receive treatment, and returned to advance in a playoff. “I wasn’t that nervous in the playoff at all because I was like, look, none of these guys just got treated for cancer. This is such a blessing for me to even be able to do this,” he says.

Esteve’s friend Jeremiah Daly ’04, a former Dartmouth teammate, considers him an inspiration. “He’s been able to balance work, having a family, and playing golf at an incredibly high level,” Daly says. “He’s having a lot of success, and it’s awesome to watch.”

Cancer-free for 11 years, Esteve has remained involved with his alma mater through the Friends of Dartmouth Golf, an alumni group that supports the men’s and women’s programs. He has hosted the teams on multiple spring trips to Florida, enabling them to play at two clubs where he’s a member: Indian Creek near Miami and Isleworth outside Orlando.

At Isleworth, home course of several PGA Tour pros, Esteve pairs with Birchall annually in a two-day invitational tournament. In 2019 Esteve set an amateur course record with a first-round 63. Though he’s not the most celebrated golfer at Isleworth, Esteve has an almost mayoral presence at the club. “He’s just such a joyful person to be around,” says Birchall. “I think anyone that’s around him now is just magnetically drawn to his personality, because he’s just got such a relaxed, joyful approach.”

Mike Cullity has covered golf since 1995. He is writing a centennial history of New Hampshire’s Manchester Country Club.