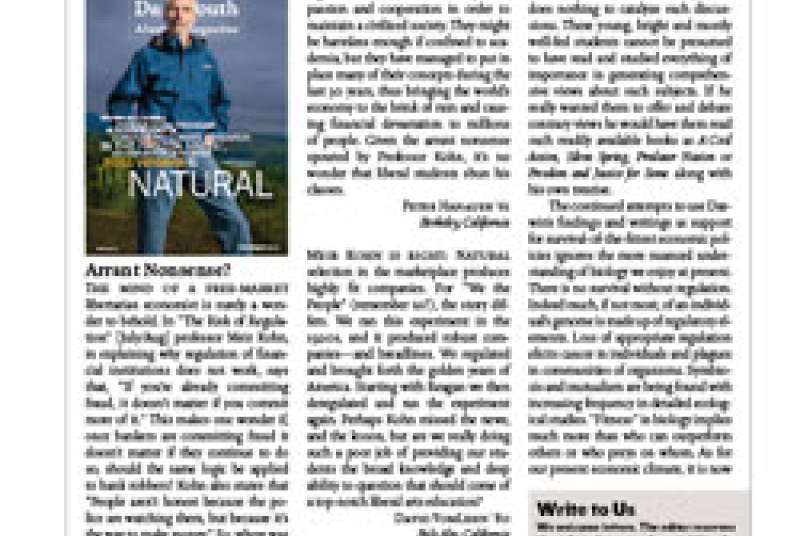 Arrant Nonsense? The mind of a free-market libertarian economist is surely a wonder to behold. In “The Risk of Regulation” [July/Aug] professor Meir Kohn, in explaining why regulation of financial institutions does not work, says that, “If you’re already committing fraud, it doesn’t matter if you commit more of it.” This makes one wonder if, once bankers are committing fraud it doesn’t matter if they continue to do so, should the same logic be applied to bank robbers? Kohn also states that “People aren’t honest because the police are watching them, but because it’s the way to make money.” So, where was the good professor when Bernie Madoff needed him? And poor Goldman Sachs: It just didn’t realize it could make as much money through honest dealings as it could by selling worthless securities to its customers and then taking the other side of the bet for itself.

Unfortunately free-market economists like Kohn not only lack common sense and a basic understanding of human nature, they also fail to grasp that capitalism must be leavened by compassion and cooperation in order to maintain a civilized society. They might be harmless enough if confined to academia, but they have managed to put in place many of their concepts during the last 30 years, thus bringing the world’s economy to the brink of ruin and causing financial devastation to millions of people. Given the arrant nonsense spouted by Professor Kohn, it’s no wonder that liberal students shun his classes.

Meir Kohn is right: Natural selection in the marketplace produces highly fit companies. For “We the People” (remember us?), the story differs. We ran this experiment in the 1920s, and it produced robust companies—and breadlines. We regulated and brought forth the golden years of America. Starting with Reagan we then deregulated and ran the experiment again. Perhaps Kohn missed the news, and the lesson, but are we really doing such a poor job of providing our students the broad knowledge and deep ability to question that should come of a top-notch liberal arts education?

The article regarding Kohn and his teaching style left me disappointed on a number of counts. First he denigrated students who might harbor a more liberal (and less libertarian) view by accusing them of being infected by those terrible twin traits of being both ignorant and arrogant, an accusation that might equally apply to him.

He indicates he would welcome a diversity of views in his class, but he does nothing to catalyze such discussions. These young, bright and mostly well-fed students cannot be presumed to have read and studied everything of importance in generating comprehensive views about such subjects. If he really wanted them to offer and debate contrary views he would have them read such readily available books as A Civil Action, Silent Spring, or Predator Nation or along with his own treatise.

The continued attempts to use Darwin’s findings and writings as support for survival-of-the-fittest economic policies ignores the more nuanced understanding of biology we enjoy at present. There is no survival without regulation. Indeed much, if not most, of an individual’s genome is made up of regulatory elements. Loss of appropriate regulation elicits cancer in individuals and plagues in communities of organisms. Symbiosis and mutualism are being found with increasing frequency in detailed ecological studies. “Fitness” in biology implies much more than who can outperform others or who preys on whom. As for our present economic climate, it is now impossible to sort out the authorship of our myriad policies as lobbyists and representatives of industries are having such an immense influence on these policies. What self-respecting biologist would argue for subsidies for industries that deplete natural resources, and what self-respecting economist would argue (as the pharmaceutical industry has successfully done) for Medicare to be shorn of its ability to negotiate drug prices?

It would do Kohn far more justice, I submit, if he could be interviewed and thus speak directly to your readers. A probing writer might ask how does Kohn exactly measure corruption and illegality as opposed to “simply” acting in bad faith.

Going It Alone Adding to the chronicles of “goddamned independents” [GDI] as defined by John Fanestil ’83 in “Declaration of Independence” [July/Aug], my story differs in only one respect. John chose not to pledge his sophomore year after observing his chosen fraternity’s behavior up close. I did pledge my fraternity, but just for one day in early 1952.

I was proud to have been selected as one of the top three candidates to pledge this national Jewish fraternity. Initiation night was scheduled. That cold evening, we pledges were politely asked to go into the basement. Ordered to strip naked in front of the other pledges and brothers, I was told to sit on a huge block of ice. Molasses was poured over my head by one brother and Wheaties by another. Handed my clothes, I was dismissed to go back to my dorm. I resigned the next day and never set foot in that or any other fraternity on campus while relishing my three final years of being a GDI.

For the Record I’d like to correct a minor point in “Welcome to the State of Virginia” [July/Aug]: On page 40 reference is made to “the only known diary to survive the shipwrecked adventure.” This pertains to Shackleton’s Endurance expedition (1914-16), which gave rise to one of the great survival stories. There are in fact many diaries that survived, most now residing at the Scott Polar Research Institute (SPRI) at the University of Cambridge. The diary in Rauner was the work of Col. Thomas H. Orde-Lees, but it is only one of three that he kept. The other two are at SPRI and the Canterbury Museum in Christchurch, New Zealand.

The Ryan Effect Congratulations to Ty Burr ’80 on his excellent article about the lamentably neglected film career of Robert Ryan ’32 [“The Actor Who Knew Too Much,” July/Aug]. I would have included in Ryan’s Top 10 his fine performances in the westerns The Professionals and The Wild Bunch.

Exit Interview I read with great interest the interview with President Jim Kim [“An Improbable Opportunity,” July/Aug] and also enjoyed the laudatory letter from John Murphy ’58. I’m sorry to see Kim leave but feel he will be greatly enriched in his new position “alleviating poverty” in the world.