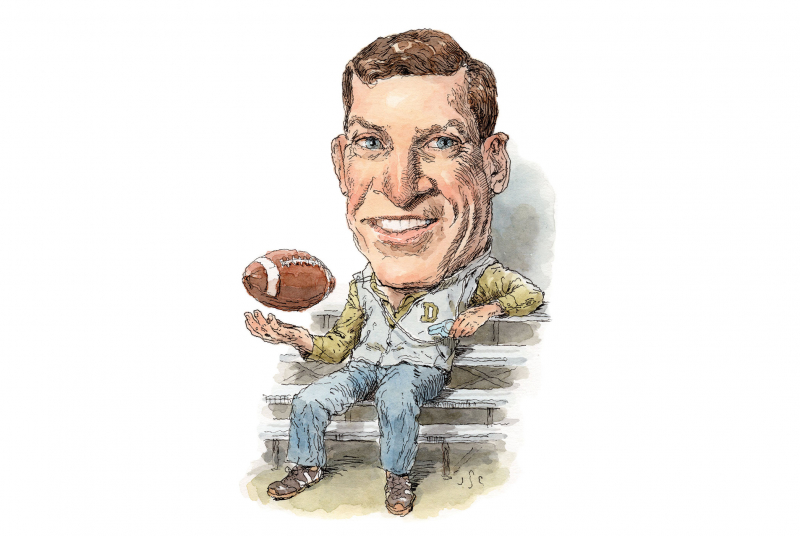 Personal: Lives in Hanover with wife Kirsten; father of adult daughter and son; grandfather of four

“A great athlete has a certain skill set, but you’ve got to consider impact on others. We can all remember, from a young age, the nastiest person we knew and the nicest. It’s about how you are remembered—as an athlete who was a jerk or an athlete who was nice, who was a good person.”

“I tell our players, ‘The rules are simple: Do nothing to embarrass yourself, your family, or the football program. Treat people the way you like to be treated. Have an athletic dream, have an academic dream, and have a vision of how you want to be viewed by the world. Have an aspiration. You won’t play football forever.’ ”

“As a team we’ve talked about George Floyd, Breonna Taylor, and Ahmaud Arbery. We’ve talked about abortion and reproductive rights. We had a facilitator talk about sexual assault. After her presentation I asked whether anyone had a family member who’d been assaulted. I was stunned so many hands went up, so I asked if anyone would be willing to share their experience. One guy had a story that really affected everyone.”

“Why discuss social issues? Coaches are the people our players are going to see the most in their four years on campus. We have an opportunity to open up conversations. I tell players they’re going to work in the most diverse workforce in history, and we have a great petri dish here to learn from and about each other and maybe get started on solving some of the world’s problems.”

“There are a couple acronyms I push: First is ‘CARE,’ which is on wristbands we give out as a reminder we care about our community, our friends, our teammates, and ourselves. It stands for consider we’re not all the same, accept those differences, respect everyone with whom you come in contact, and educate. If you don’t know, ask. Second is ‘STAR,’ a takeoff on Polaris: be smart, train, be aggressive, be relentless.”

“My approach to players comes from what I wish my experience had been. I wanted to play in the NFL and had no backup plan. No one ever talked to me about that—or how I was doing off the field. I would have benefited if someone had said, ‘I hear you skipped a class.’ We engage with the faculty, and we have mentors and alums who talk to our players about life, about possible careers.”

“I tell my players, ‘I never introduce anyone to anyone. You then deprive someone else of the practice. If I’m with an alum, I want you to come up and tell that person who you are.’ I also push our guys to say hello and smile at people they encounter on campus, to sit with people they don’t know in the dining hall.”

“I like being the spoon, stirring things up. As one of nine kids, I am inclined to interact with everybody.”

“A great joy of coaching is having an impact no one knows about, hearing from guys years later. They tell me I did something that meant a lot that I might not even remember. That they do is very satisfying.”

You May Also Like
How Buddy Teevens ’79 Transformed Football Forever
A few years ago, Coach Teevens looked like a goner. Then he reorganized his staff and started a radical experiment: no tackling in practice.