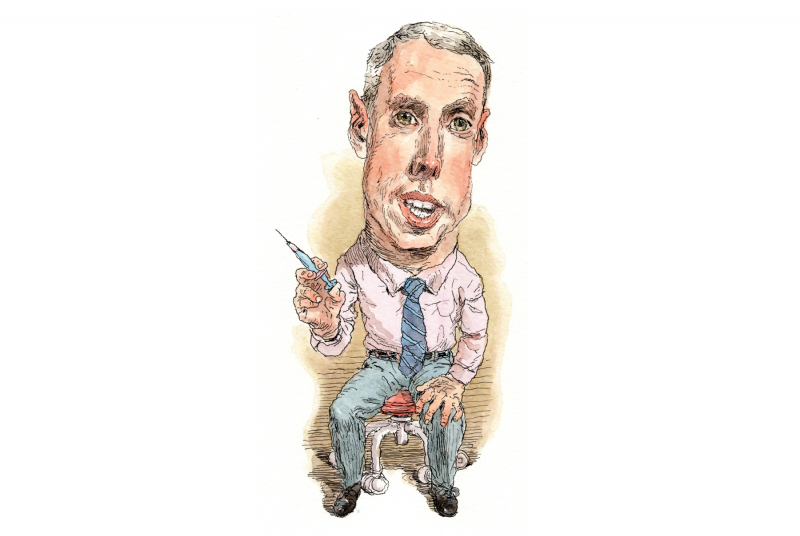 Notable: Author of many academic papers and op-eds; recently focused on the worldwide shortage of syringes that will limit delivery of Covid and other vaccines

Career: Global health director for ApiLabs, a research and development arm of U.S.-based Apiject Systems in Geneva; 13 years with the World Health Organization (WHO) as director of integrated health services, director of department of service delivery, and coordinator of patient safety

Personal: Lives with wife Allison in Chevry, France; father of daughters May and Fiona; brother of Catherine Kelley ’86

“In general, the question most people are asking about Covid is, ‘What does it mean for me?’ That’s understandable, but a global pandemic requires us to think beyond ourselves.”

“The U.S. has done some things right during the pandemic—most notably investing heavily in vaccine development. Two other things deserved much more investment: community messaging around standard precautions for preventing infections and getting the Centers for Disease Control and Prevention heavily involved in data collection on infection rates.”

“People’s lack of full trust in vaccines, and the wider distrust of science and government we’ve seen in the United States, have resulted from our not having invested enough in getting information out into communities.”

“Living outside the United States has given me a perspective on how everything in America seems to be about punching and counter-punching, not so much about a sense of community or the common good.”

“I’ve been surprised not only by how political proven science has become in the United States, but also by the collective unwillingness to implement the kind of basic public health practices embraced in places such as Switzerland or Singapore or West Africa, where Ebola created greater public health awareness and preparedness. That’s based more on national personalities than on Covid.”

“Liberia, which developed protocols to deal with Ebola, does not get enough credit for being the first to mandate airport testing and standard public health practices.”

“The WHO probably could have done more, and the wider scientific community should have been working on science rather than politics.”

“The company I’ve joined is working not just on vaccine doses, but also improving the way we deploy vaccinations all over the world—billions of them. Using new technologies, our goal is to develop single-dose syringes that can be produced very rapidly, which would have a big impact on Covid and also the future of immunization.”

“What keeps me awake at night is the projected shortage of as many as 5 billion syringes around the world by early 2022. My hope is that the U.S. government is in a global health pivot. The domestic capacity is there, but right now we are shipping doses without syringes to inject the vaccine. UNICEF and the Pan American Health Organization are trying to address the shortage, but it could mean vaccines wasted and people dying unnecessarily.”

“The vaccines we have are good but not effective enough to really stamp out Covid. We’ll be doing booster shots for a while, and there will be a program that will integrate with the flu program. We will get to the syringe capacity we need, but we’ll be in big trouble in the meantime.”

“The first case of the next pandemic is going to be seen by a primary care physician somewhere—not by the dean of a medical school or expert often seen speaking on CNN.”

“It’s essential to assess public health every day and be able to tweak positions on things such as mask wearing and public gatherings. It’s horrible for public health that changing a position can be politically damaging.”

“Many people who have had mild cases will have long-term Covid. That’s the bad news. The good news is that we’ve got about a hundred vaccines in the development pipeline, which will help as vaccine-resistant strains show up.”