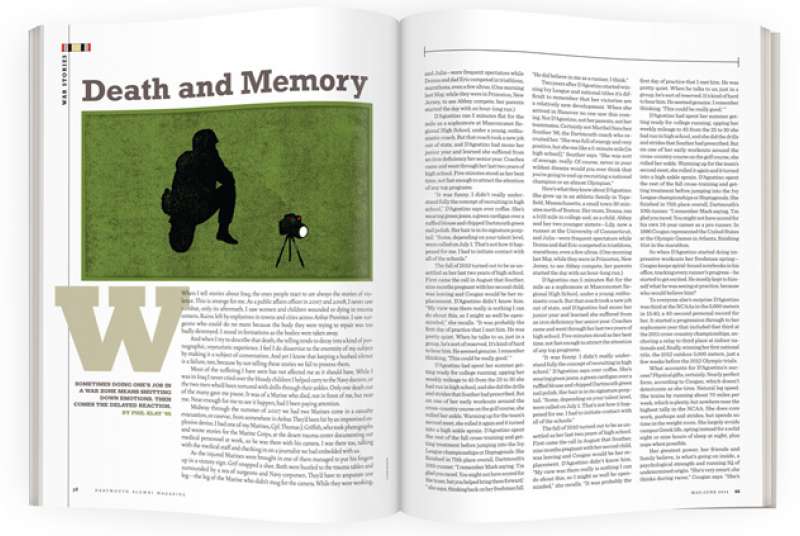 When I tell stories about Iraq, the ones people react to are always the stories of violence. This is strange for me. As a public affairs officer in 2007 and 2008, I never saw combat, only its aftermath. I saw women and children wounded or dying in trauma centers. Ruins left by explosives in towns and cities across Anbar Province. I saw surgeons who could do no more because the body they were trying to repair was too badly destroyed. I stood in formations as the bodies were taken away.

And when I try to describe that death, the telling tends to decay into a kind of pornographic, voyeuristic experience. I feel I do disservice to the enormity of my subject by making it a subject of conversation. And yet I know that keeping a hushed silence is a failure, too, because by not telling these stories we fail to process them.

Most of the suffering I have seen has not affected me as it should have. While I was in Iraq I never cried over the bloody children I helped carry to the Navy doctors, or the two men who’d been tortured with drills through their ankles. Only one death out of the many gave me pause. It was of a Marine who died, not in front of me, but near me. Near enough for me to see it happen, had I been paying attention.

Midway through the summer of 2007 we had two Marines come in a casualty evacuation, or casevac, from somewhere in Anbar. They’d been hit by an improvised explosive device. I had one of my Marines, Cpl. Thomas J. Griffith, who took photographs and wrote stories for the Marine Corps, at the desert trauma center documenting our medical personnel at work, so he was there with his camera. I was there too, talking with the medical staff and checking in on a journalist we had embedded with us.

As the injured Marines were brought in one of them managed to put his fingers up in a victory sign. Grif snapped a shot. Both were hustled to the trauma tables and surrounded by a sea of surgeons and Navy corpsmen. They’d have to amputate one leg—the leg of the Marine who didn’t mug for the camera. While they were working, they got word that another one was coming in, and that CPR had already started on the bird. That was a bad sign. They say if you make it to a trauma table with a pulse, you’ll probably pull through. So the docs were hoping his heart would get there still beating.

They brought him in and cracked him open, trying to restart his heart. A crowd of people was working on him but Grif managed clean shots of the docs, the chaplain and others. He left the dying Marine alone. While this was going on I know I was around somewhere, but I can’t remember where exactly. I know I wasn’t involved in any kind of deep feeling about it. I was busy. There’s a lot to focus on in a trauma ward, and death happens with a certain degree of regularity, though it had been declining in recent months and would soon drop precipitously. And, of course, it’s difficult to relate to the inner contents of another person’s chest. I’ve had cuts, abrasions and lacerations. I saw a child’s face riddled with shrapnel, once, and I could relate to that damage. I could take the sight before me and turn it into an idea of how badly traumatized the human body that I was observing must have been. And then I could feel horror.

But an open chest, the skin stretched unnaturally to enable access, instruments poking amongst the organs, that’s like nothing in my experience. If you knew that Marine, I suppose the sight would be terrible, seeing your buddy, your squad member, looking like this. Hardly like a person. If you didn’t know the Marine, nothing.

So I was in and out. But for the docs, this was a person. They know what that trauma means to a human body. So they worked until the head surgeon, who had his hands deep in the Marine’s chest, stopped. He raised a hand, bladed, signaling that there was no more to be done. Grif snapped the shot.

I would never have thought about that Marine again, except for Grif’s photos. Grif assembled them and turned them into an audio slide show, and when I had a spare minute I sat down at my desk in Al Taqaddum and really looked at them. I saw the images and heard Grif’s recorded voice over them. When he announced the death of the unnamed Marine, I found myself looking at a photo of the surgeon, his hand falling away from his neck but his eyes fixed in front of him, out at his fellow sailors.

It was at this moment, in the quiet time I had created for myself to review my Marines’ work, that a surge of emotion swept over me; something I couldn’t shake, and still can’t. I recall the details of the day, half-noticed at the time. Like the corpsman wiping up blood on the floor; there was too much and then there were just red streaks in an arc like a monochromatic rainbow. And spattered blood drops. And dust. The one Marine so surrounded and obscured by medical equipment I couldn’t see his face, only a tattoo of a cross on his right shoulder and an eagle, globe and anchor beneath a four-leaf clover on his breast.

The only time I had anything even remotely resembling a flashback had to do with that Marine. I was given two weeks leave midway through my deployment and I went home to New York. At one point I walked down Madison Avenue, near where it intersects with Broadway. It was a beautiful day. The sun was shining off the Flatiron building, men and women were passing by in summer clothes, and I was seized without warning by the urge to weep. The images came back not as photographs, but as living memories. And for that moment Madison Avenue seemed just a fiction, one that was lovely but spun so thin I could see through it, to the desert where that Marine fought and died.

The fierceness of my recollection and the emotions that come with it have everything to do with seeing those photos and hearing Grif’s voice tell the story. It is not because I was there. When a suicide bomber killed more than 30 people outside our gate and we brought the wounded into surgical, I helped carry an injured child and thought, “I will never forget this kid’s face.” It was the first brutally injured child I had ever seen in my life. By the end of the night, I couldn’t have picked him out of a lineup. By that time I had seen too many injured children, been too busy for emotional indulgences. And no one told me that child’s story later, in a time of quiet.

We’re told that when we remember, the same parts of our brain light up as when we experienced the event we’re remembering. Your brain lives through it again. But here, watching Grif’s piece, I experienced it for the first time.

I’m not sure what the unnamed Marine would say if he knew the emotions his death sparked in me, if he would mock me for their artificiality, reject any sympathy from someone who could not hope to understand what he experienced. Though I continue to tell stories about Iraq, I sometimes fear this makes me a fraud. I feel guilty about the sorrow I feel because I know it is manufactured, and I feel guilty about the sorrow I do not feel because it is owed—it is the barest beginnings of what is owed to the fallen.

Phil Klay served in the Marine Corps for four years. He deployed to Anbar Province, Iraq, as a public affairs officer from January 2007 to February 2008. At Dartmouth he majored in English and creative writing, played rugby and boxed. He earned an M.F.A. in creative writing from Hunter College in 2011. He has been published in Granta, The Best American Non-Required Reading 2012 (Mariner Books) and Fire and Forget (Da Capo Press, 2013). A collection of his short stories about Iraq is due next year from Penguin Press. Used by permission fromThe New York Times, October 28, 2010 © 2010 The New York Times. All rights reserved.