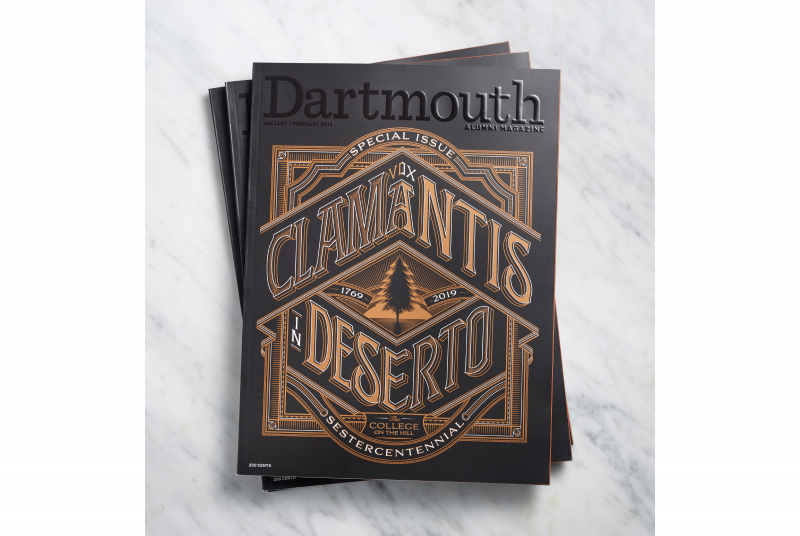 These are the highest honors in college and university magazine publishing.
September-October 2020

Dartmouth Alumni Magazine has won four 2020 Circle of Excellence awards, the highest honors in college and university magazine publishing awarded annually by the Council for Advancement and Support of Education (CASE).

DAM won a Gold Award for general interest magazines published at least four times per year. The CASE judges said DAM “excels at producing photo essays and artfully designed layouts that are not too text-heavy and that keep readers invested. The result is an inventive, appealing, and dynamic publication that strikes just the right balance among information, entertainment, and aesthetics to keep its readers engaged with campus.”

DAM won a Grand Gold Award in photography for the photo essay “Perpetual Motion” (September/October 2019 issue). The judges called the series “super innovative,” and wrote that they “were in awe of this concept and execution.”

The January/February 2019 issue of DAM, which celebrated Dartmouth’s 250th anniversary, won a Silver Award for magazine design and a Silver Award for special issues. “The magazine achieved impact for a celebration issue,” the judges said of the sestercentennial special—they were “impressed by the quantity of content and huge efforts to source historical content and mix with brand new celebratory content—complete with a letter archive and beautiful pull-out posters.” The special issue received additional praise from PRINT magazine, which included the issue in its Best of the East 2019 Awards.

DAM was also named a finalist for CASE’s Magazine of the Year Award.

The editorially independent DAM has won more than 50 editorial and design awards in various publishing competitions over the last 20 years.