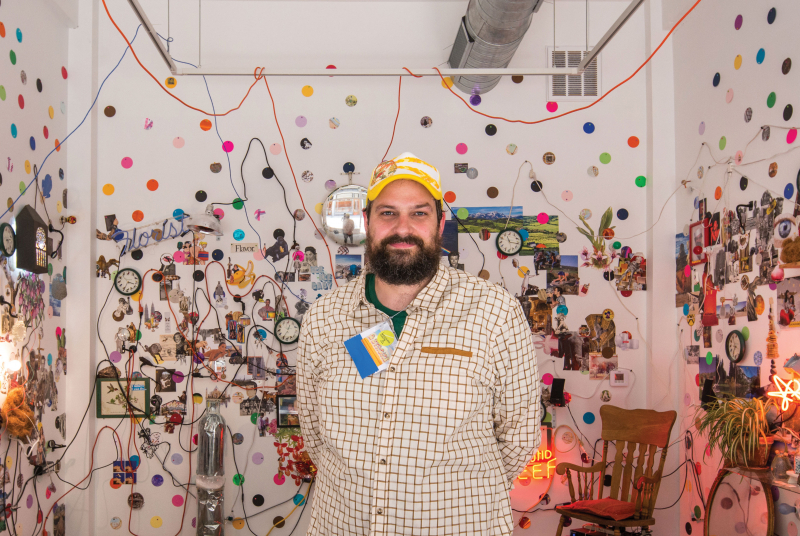 It’s a budget-and-spreadsheet day for artist Wright at the Pilchuck Glass School. Since he became artistic director last March at one of the world’s premier art schools focused on glass, paperwork is a necessary part of his job. But he happily bolts from his office to show a first-time visitor the facets of the school and its creations. Tucked into the forested foothills of the North Cascades of Washington, the 54-acre campus and its rustic wooden buildings have the serene feel of a spiritual retreat.

Wright is returning to a place where he stretched his artistic abilities, both as a student and instructor. In the 50 years since its founding by famed glass artist Dale Chihuly, Pilchuck has built an international reputation for challenging ambitious and emerging artists—and for welcoming artists from other disciplines to inspire new ways of seeing and working with glass. Its summer-through-fall sessions—ranging from one to three weeks—attract 500 students each year. Wright’s mandate is to create a curriculum and community to inspire and ground them.

“An important goal for me,” he says, “is to create a more accessible, diverse, and family-friendly atmosphere on campus.” He notes that Pilchuck has gender parity in its student makeup and that artists have come here from 70 countries. But students are mostly white, tuition runs up to $3,700 per course, and scholarships are limited. “I’d love to be able to offer need-blind admission for young artists, artists of color, working parents,” he says.

“Ben is unafraid to blur disciplines and approaches,” says Susie Silbert, curator of modern and contemporary glass at the Corning Museum of Glass. “This fearless creativity makes him uniquely suited to his new role.” Wright has seen firsthand how an eclectic, immersive, hands-on approach can unleash creativity and accelerate skill. “I’ve always thought it’s so amazing what you can get done in 24 hours at Pilchuck,” he said to a reporter after his hiring was announced. “If you could extrapolate that to the wider world, you could do anything.”

John Damianos ’16
Ready to Work
Med school student is about to join the front lines of COVID-19 fight.

Voices in the Wilderness
Tune In, Turn On
Audio app developed by Faye Keegan ’12 offers something completely different.

From the Archive
The Computerization of Music

A Dartmouth professor explains how electronics have changed the music industry and made the traditional music major obsolete.