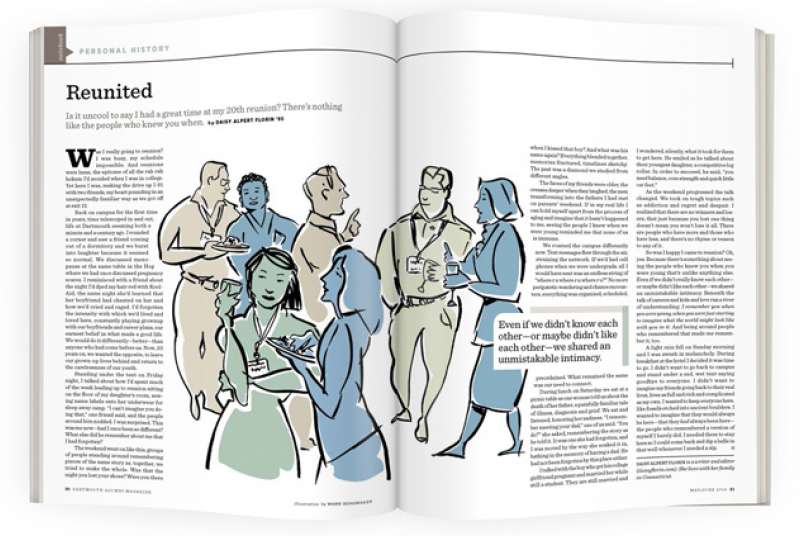 Is it uncool to say I had a great time at my 20th reunion? There’s nothing like the people who knew you when.
Daisy Alpert Florin ’95 | May - June 2016

Was I really going to reunion? I was busy, my schedule impossible. And reunions were lame, the epitome of all the rah-rah hokum I’d avoided when I was in college. Yet here I was, making the drive up I-91 with two friends, my heart pounding in an unexpectedly familiar way as we got off at exit 13.

Back on campus for the first time in years, time telescoped in and out, life at Dartmouth seeming both a minute and a century ago. I rounded a corner and saw a friend coming out of a dormitory and we burst into laughter because it seemed so normal. We discussed menopause at the same table in the Hop where we had once discussed pregnancy scares. I reminisced with a friend about the night I’d dyed my hair red with Kool-Aid, the same night she’d learned that her boyfriend had cheated on her and how we’d cried and raged. I’d forgotten the intensity with which we’d lived and loved here, constantly playing grownup with our boyfriends and career plans, our earnest belief in what made a good life. We would do it differently—better—than anyone who had come before us. Now, 20 years on, we wanted the opposite, to leave our grown-up lives behind and return to the carelessness of our youth.

Standing under the tent on Friday night, I talked about how I’d spent much of the week leading up to reunion sitting on the floor of my daughter’s room, sewing name labels onto her underwear for sleep away camp. “I can’t imagine you doing that,” one friend said, and the people around him nodded. I was surprised. This was me now—had I once been so different? What else did he remember about me that I had forgotten?

The weekend went on like this, groups of people standing around remembering pieces of the same story as, together, we tried to make the whole. Was that the night you lost your shoes? Were you there when I kissed that boy? And what was his name again? Everything blended together, memories fractured, timelines sketchy. The past was a diamond we studied from different angles.

The faces of my friends were older, the creases deeper when they laughed, the men transforming into the fathers I had met on parents’ weekend. If in my real life I can hold myself apart from the process of aging and imagine that it hasn’t happened to me, seeing the people I knew when we were young reminded me that none of us is immune.

We roamed the campus differently now. Text messages flew through the air, straining the network. If we’d had cell phones when we were undergrads, all I would have sent was an endless string of “where r u where r u where r u?” No more peripatetic wandering and chance encounters, everything was organized, scheduled, preordained. What remained the same was our need to connect.

During lunch on Saturday we sat at a picnic table as one woman told us about the death of her father, a painfully familiar tale of illness, diagnosis and grief. We sat and listened, honoring her sadness. “I remember meeting your dad,” one of us said. “You do?” she asked, remembering the story as he told it. It was one she had forgotten, and I was moved by the way she soaked it in, bathing in the memory of having a dad. He had not been forgotten by this place either.

I talked with the boy who got his college girlfriend pregnant and married her while still a student. They are still married and I wondered, silently, what it took for them to get here. He smiled as he talked about their youngest daughter, a competitive log roller. In order to succeed, he said, “you need balance, core strength and quick little cat feet.”

As the weekend progressed the talk changed. We took on tough topics such as addiction and regret and despair. I realized that there are no winners and losers, that just because you lost one thing doesn’t mean you won’t lose it all. There are people who have more and those who have less, and there’s no rhyme or reason to any of it.

So was I happy I came to reunion? Oh, yes. Because there’s something about seeing the people who knew you when you were young that’s unlike anything else. Even if we didn’t really know each other—or maybe didn’t like each other—we shared an unmistakable intimacy. Beneath the talk of careers and kids and love ran a river of understanding: I remember you when you were young, when you were just starting to imagine what the world might look like with you in it. And being around people who remembered that made me remember it, too.

A light rain fell on Sunday morning and I was awash in melancholy. During breakfast at the hotel I decided it was time to go. I didn’t want to go back to campus and stand under a sad, wet tent saying goodbye to everyone. I didn’t want to imagine my friends going back to their real lives, lives as full and rich and complicated as my own. I wanted to keep everyone here, like fossils etched into ancient boulders. I wanted to imagine that they would always be here—that they had always been here—the people who remembered a version of myself I barely did. I needed them to stay here so I could come back and dip a ladle in that well whenever I needed a sip.

Daisy Alpert Florin is a writer and editor (daisyflorin.com). She lives with her family in Connecticut.