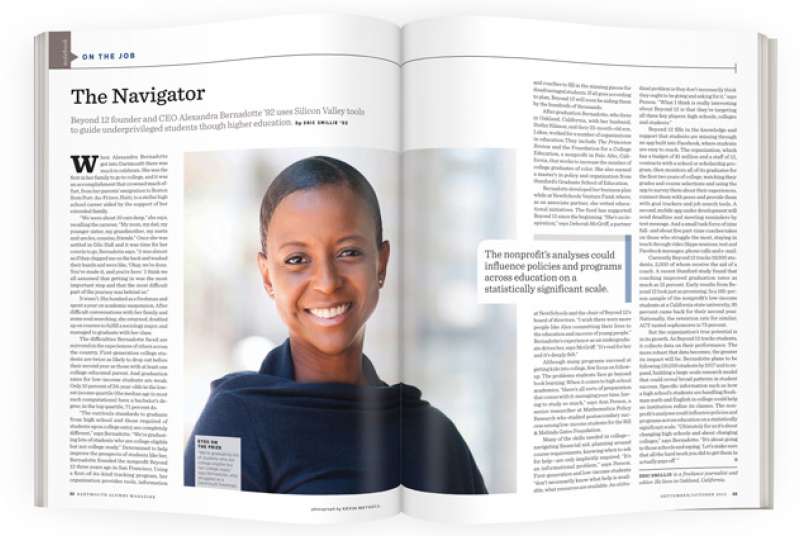 When Alexandra Bernadotte got into Dartmouth there was much to celebrate. She was the first in her family to go to college, and it was an accomplishment that crowned much effort, from her parents’ emigration to Boston from Port-Au-Prince, Haiti, to a stellar high school career aided by the support of her extended family.

“We were about 10 cars deep,” she says, recalling the caravan. “My mom, my dad, my younger sister, my grandmother, my aunts and uncles, cousins, friends.” Once she was settled in Gile Hall and it was time for her coterie to go, Bernadotte says, “it was almost as if they clapped me on the back and washed their hands and were like, ‘Okay, we’re done. You’ve made it, and you’re here.’ I think we all assumed that getting in was the most important step and that the most difficult part of the journey was behind us.”

It wasn’t. She bombed as a freshman and spent a year on academic suspension. After difficult conversations with her family and some soul searching, she returned, doubled up on courses to fulfill a sociology major, and managed to graduate with her class.

The difficulties Bernadotte faced are mirrored in the experiences of others across the country. First-generation college students are twice as likely to drop out before their second year as those with at least one college-educated parent. And graduation rates for low-income students are weak: Only 10 percent of 24-year-olds in the lowest income quartile (the median age in most such computations) have a bachelor’s degree; in the top quartile, 71 percent do.

“The curricula standards to graduate from high school and those required of students upon college entry are completely different,” says Bernadotte. “We’re graduating lots of students who are college eligible but not college ready.” Determined to help improve the prospects of students like her, Bernadotte founded the nonprofit Beyond 12 three years ago in San Francisco. Using a first-of-its-kind tracking program, her organization provides tools, information and coaches to fill in the missing pieces for disadvantaged students. If all goes according to plan, Beyond 12 will soon be aiding them by the hundreds of thousands.

After graduation Bernadotte, who lives in Oakland, California, with her husband, Stefan Nilsson, and their 23-month-old son, Lukas, worked for a number of organizations in education.They include The Princeton Review and the Foundation for a College Education, a nonprofit in Palo Alto, California, that works to increase the number of college graduates of color. She also earned a master’s in policy and organization from Stanford’s Graduate School of Education.

Bernadotte developed her business plan while at NewSchools Venture Fund, where, as an associate partner, she vetted educational initiatives. The fund has supported Beyond 12 since the beginning. “She’s an inspiration,” says Deborah McGriff, a partner at NewSchools and the chair of Beyond 12’s board of directors. “I wish there were more people like Alex committing their lives to the education and success of young people.” Bernadotte’s experience as an undergraduate drives her, says McGriff. “It’s real for her and it’s deeply felt.”

Although many programs succeed at getting kids into college, few focus on follow-up. The problems students face go beyond book learning. When it comes to high school academics, “there’s all sorts of preparation that comes with it: managing your time, having to study so much,” says Ann Person, a senior researcher at Mathematica Policy Research who studied postsecondary success among low-income students for the Bill & Melinda Gates Foundation.

Many of the skills needed in college—navigating financial aid, planning around course requirements, knowing when to ask for help—are only implicitly required. “It’s an informational problem,” says Person. First-generation and low-income students “don’t necessarily know what help is available, what resources are available. An attitudinal problem is they don’t necessarily think they ought to be going and asking for it,” says Person. “What I think is really interesting about Beyond 12 is that they’re targeting all three key players: high schools, colleges and students.”

Beyond 12 fills in the knowledge and support that students are missing through an app built into Facebook, where students are easy to reach. The organization, which has a budget of $1 million and a staff of 12, contracts with a school or scholarship program, then monitors all of its graduates for the first two years of college, watching their grades and course selections and using the app to survey them about their experiences, connect them with peers and provide them with goal trackers and job search tools. A second, mobile app under development will send deadline and meeting reminders by text message. And a small task force of nine full- and about five part-time coaches takes on those who struggle the most, staying in touch through video Skype sessions, text and Facebook messages, phone calls and e-mail.

Currently Beyond 12 tracks 19,000 students, 2,000 of whom receive the aid of a coach. A recent Stanford study found that coaching improved graduation rates as much as 15 percent. Early results from Beyond 12 look just as promising. In a 165-person sample of the nonprofit’s low-income students at a California state university, 95 percent came back for their second year. Nationally, the retention rate for similar, ACT-tested sophomores is 73 percent.

But the organization’s true potential is in its growth. As Beyond 12 tracks students, it collects data on their performance. The more robust that data becomes, the greater its impact will be. Bernadotte plans to be following 130,000 students by 2017 and to expand, building a large-scale research model that could reveal broad patterns in student success. Specific information such as how a high school’s students are handling freshman math and English in college could help an institution refine its classes. The nonprofit’s analyses could influence policies and programs across education on a statistically significant scale. “Ultimately for us it’s about changing high schools and about changing colleges,” says Bernadotte. “It’s about going to those schools and saying, ‘Let’s make sure that all the hard work you did to get them in actually pays off.’ ”

Eric Smillie is a freelance journalist and editor. He lives in Oakland, California.