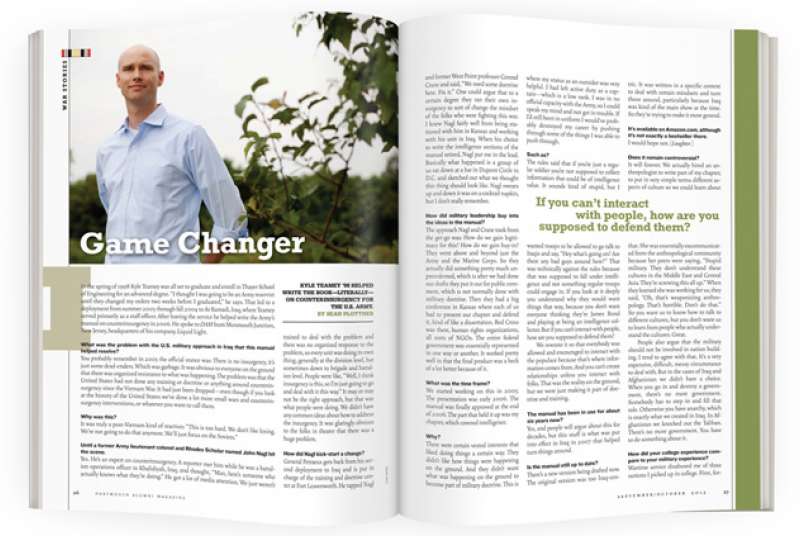 In the spring of 1998 Kyle Teamey was all set to graduate and enroll in Thayer School of Engineering for an advanced degree. “I thought I was going to be an Army reservist until they changed my orders two weeks before I graduated,” he says. That led to a deployment from summer 2003 through fall 2004 to Ar Ramadi, Iraq, where Teamey served primarily as a staff officer. After leaving the service he helped write the Army’s manual on counterinsurgency in 2006. He spoke to DAM from Monmouth Junction, New Jersey, headquarters of his company, Liquid Light.

What was the problem with the U.S. military approach in Iraq that this manual helped resolve?
You probably remember in 2003 the official stance was: There is no insurgency, it’s just some dead-enders. Which was garbage. It was obvious to everyone on the ground that there was organized resistance to what was happening. The problem was that the United States had not done any training or doctrine or anything around counterinsurgency since the Vietnam War. It had just been dropped—even though if you look at the history of the United States we’ve done a lot more small wars and counterinsurgency interventions, or whatever you want to call them.

Why was this?
It was truly a post-Vietnam kind of reaction: “This is too hard. We don’t like losing. We’re not going to do that anymore. We’ll just focus on the Soviets.”

Until a former Army lieutenant colonel and Rhodes Scholar named John Nagl hit the scene.
Yes. He’s an expert on counterinsurgency. A reporter met him while he was a battalion operations officer in Khalidiyah, Iraq, and thought, “Man, here’s someone who actually knows what they’re doing.” He got a lot of media attention. We just weren’t trained to deal with the problem and there was no organized response to the problem, so every unit was doing its own thing, generally at the division level, but sometimes down to brigade and battalion level. People were like, “Well, I think insurgency is this, so I’m just going to go and deal with it this way.” It may or may not be the right approach, but that was what people were doing. We didn’t have any common ideas about how to address the insurgency. It was glaringly obvious to the folks in theater that there was a huge problem.

How did Nagl kick-start a change?
General Petraeus gets back from his second deployment to Iraq and is put in charge of the training and doctrine center at Fort Leavenworth. He tapped Nagl and former West Point professor Conrad Crane and said, “We need some doctrine here. Fix it.” One could argue that to a certain degree they ran their own insurgency to sort of change the mindset of the folks who were fighting this war. I knew Nagl fairly well from being stationed with him in Kansas and working with his unit in Iraq. When his choice to write the intelligence sections of the manual retired, Nagl put me in the lead. Basically what happened is a group of us sat down at a bar in Dupont Circle in D.C. and sketched out what we thought this thing should look like. Nagl swears up and down it was on a cocktail napkin, but I don’t really remember.

How did military leadership buy into the ideas in the manual?
The approach Nagl and Crane took from the get-go was: How do we gain legitimacy for this? How do we gain buy-in? They went above and beyond just the Army and the Marine Corps. So they actually did something pretty much unprecedented, which is after we had done our drafts they put it out for public comment, which is not normally done with military doctrine. Then they had a big conference in Kansas where each of us had to present our chapter and defend it, kind of like a dissertation. Red Cross was there, human rights organizations, all sorts of NGOs. The entire federal government was essentially represented in one way or another. It worked pretty well in that the final product was a heck of a lot better because of it.

What was the time frame?
We started working on this in 2005. The presentation was early 2006. The manual was finally approved at the end of 2006. The part that held it up was my chapter, which covered intelligence.

Why?
There were certain vested interests that liked doing things a certain way. They didn’t like how things were happening on the ground. And they didn’t want what was happening on the ground to become part of military doctrine. This is where my status as an outsider was very helpful. I had left active duty as a captain—which is a low rank. I was in no official capacity with the Army, so I could speak my mind and not get in trouble. If I’d still been in uniform I would’ve probably destroyed my career by pushing through some of the things I was able to push through.

Such as?
The rules said that if you’re just a regular soldier you’re not supposed to collect information that could be of intelligence value. It sounds kind of stupid, but I wanted troops to be allowed to go talk to Iraqis and say, “Hey what’s going on? Are there any bad guys around here?” That was technically against the rules because that was supposed to fall under intelligence and not something regular troops could engage in. If you look at it deeply you understand why they would want things that way, because you don’t want everyone thinking they’re James Bond and playing at being an intelligence collector. But if you can’t interact with people, how are you supposed to defend them?

We rewrote it so that everybody was allowed and encouraged to interact with the populace because that’s where information comes from. And you can’t create relationships unless you interact with folks. That was the reality on the ground, but we were just making it part of doctrine and training.

The manual has been in use for about six years now?
Yes, and people will argue about this for decades, but this stuff is what was put into effect in Iraq in 2007 that helped turn things around.

Is the manual still up to date?
There’s a new version being drafted now. The original version was too Iraq-centric. It was written in a specific context to deal with certain mindsets and turn those around, particularly because Iraq was kind of the main show at the time. So they’re trying to make it more general.

It’s available on Amazon.com, although it’s not exactly a bestseller there.

I would hope not. [Laughter.]

Does it remain controversial?
It will forever. We actually hired an anthropologist to write part of my chapter, to put in very simple terms different aspects of culture so we could learn about that. She was essentially excommunicated from the anthropological community because her peers were saying, “Stupid military. They don’t understand these cultures in the Middle East and Central Asia. They’re screwing this all up.” When they learned she was working for us, they said, “Oh, that’s weaponizing anthropology. That’s horrible. Don’t do that.” So you want us to know how to talk to different cultures, but you don’t want us to learn from people who actually understand the cultures. Great.

People also argue that the military should not be involved in nation building. I tend to agree with that. It’s a very expensive, difficult, messy circumstance to deal with. But in the cases of Iraq and Afghanistan we didn’t have a choice. When you go in and destroy a government, there’s no more government. Somebody has to step in and fill that role. Otherwise you have anarchy, which is exactly what we created in Iraq. In Afghanistan we knocked out the Taliban. There’s no more government. You have to do something about it.

How did your college experience compare to your military experience?
Wartime service disabused me of three notions I picked up in college. First, formal education is important, but in many situations is of far less value than common sense and interpersonal skills. Second, there is evil in the world. And three, diplomacy doesn’t always work, particularly when dealing with evil.

The most helpful part of my education for Iraq was the environmental studies foreign study program in Kenya. Learning the basics of development, working with and through a foreign culture rather than imposing American solutions, and experiencing life in a non-Western society were invaluable experiences. Engineering classes at Dartmouth were also very helpful in learning the basics of problem-solving. Outside of the classroom, my experience in a fraternity was helpful in learning how to read people and situations and deal with individuals who had different opinions to my own. Trying to get a group of 40 frat brothers to do anything is a great lesson in leadership and management under adverse circumstances.

PRINCIPLES OF INTELLIGENCE FOR COUNTERINSURGENCY
Teamey’s chapter in the Army manual focuses on these six basic but essential factors.

1. Intelligence in counterinsurgency is about people.

2. Counterinsurgency is an intelligence war.

3. Operations and intelligence must feed each other.

4. All operations have an intelligence component.

5. Insurgencies are local, vary greatly in time and space, and are mosaic-like.

6. In a joint-combined environment, all echelons must work at intelligence.